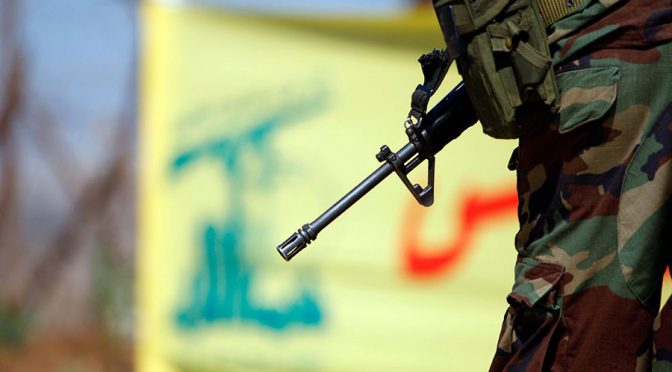 Most serious analysts credit the role of Hezbollah in the Syrian conflict as having been indispensable in turning the tide of the war in favor of the government in recent years, even though it is a role that has gone largely unrecognized.
by John Wight
It is a lack of recognition that begs the question – why? Is it because of a stubborn reluctance in various quarters to regard Hezbollah as anything other than a terrorist organization, one that belongs in the same box as ISIS or Al-Nusra? But then surely such a categorization makes no sense, considering the number of fighters the Lebanese resistance movement has lost in combat against both of those groups.
In his book, The Battle for Syria, Christopher Phillips writes, “Given Hezbollah’s reputation as the most impressive military force in the Arab world, [the group’s involvement in the conflict] sapped rebel morale and boosted the regime. By offering expertise that Assad lacked, such as light infantry and urban warfare expertise, training, or directing military tactics, from 2013 the Party of God [Hezbollah] became a vital component of Assad’s forces and greatly shaped the conflict.”

Phillips is right to cite Hezbollah’s vaunted military reputation. Since being officially established in 1985, in response to Israel’s military occupation of southern Lebanon, the Shia resistance movement has developed into one of Israel’s most fearsome foes. The brief 34-day war they fought in 2006 remains the apogee of this enmity up to now. It ended in what most considered to have been a victory for Hezbollah, creating something approaching a crisis within the Israeli political and military establishment. In fact, the Second Lebanon War, (to give the conflict its official name), changed the calculus of military power in the region from one in which Israel’s military superiority was unquestioned to one in which it was no longer.
The report produced by the commission of inquiry set up by the Israeli government to evaluate the conflict in 2006, the Winograd Commission, was damning in some of its criticisms of the country’s political and military leadership. One of the most revealing of the report’s findings confirmed the extent to which Israel considers its military superiority to be coterminous with its survival.
“Israel cannot survive in this region,” the report states, “and cannot live in it in peace or at least non-war, unless people in Israel itself and in its surroundings believe that Israel has the political and military leadership, military capabilities, and social robustness that will allow her to deter those of its neighbors who wish to harm her, and to prevent them – if necessary through the use of military force – from achieving their goal.”
Since 2006, there has been a consensus that it is only a matter of time before another war breaks out between Hezbollah and Israel. Given Israel’s recent airstrike against Hezbollah in Syria, and the intensification of tensions between them that we have witnessed over the past few weeks, it is a conflict that may arrive sooner rather than later.
In a recent Associated Press story, carried by ABC News, Aron Heller writes, “In the past month alone, Hezbollah’s chief Hassan Nasrallah has […] threatened to strike Israel’s nuclear facilities if Israel were to attack, and Israel has detailed a contingency plan to evacuate up to a quarter-million civilians from border communities to protect them from attacks from Hamas, Hezbollah or other Islamic militant groups.”
The thrust of Heller’s analysis chimes with the numerous airstrikes Israel has carried out in Syria over the course of the conflict. The most recent of those, previously mentioned, is believed to have targeted a Hezbollah weapons convoy close to Palmyra.
It is not hard to discern the dilemma Israel has faced over the course of the conflict in Syria. Its enmity with the only Arab country that remains committed to supporting the Palestinian resistance, and with whom it has a longstanding territorial dispute over the Israeli-occupied Golan Heights, provides more than enough motive for Tel Aviv to have relished the prospect of regime change in Damascus. However, the mantra of ‘better the enemy you know’ will also have likewise been prominent in the thinking of Israel’s political and military establishment in its stance on events in Syria.
Despite the decades-long hostile relations between both countries, the Assad government is a known quantity under which, though undoubtedly uneasy, peace has been obtained. The prospects of a government of Salafi-jihadists replacing Assad, one which would likely harbor a desire for an end of days reckoning with the Jewish state across its border, will have been a sobering one.

Putin’s red line in Syria is not an invitation for Israel to play Russian roulette with Assad (Op-Ed by @MartinRJay) https://t.co/8Io9h0Rr4w pic.twitter.com/yK3tPivmad

Israel’s main focus in the region continues to be Iran and Hezbollah, both of which, along with Syria under Bashar Assad, are considered part of an axis of resistance to Washington and its regional allies – Tel Aviv especially. Thus, while it undoubtedly suits Israel to see Hezbollah bleed in Syria, there will also be trepidation over the Shia resistance movement emerging from it even stronger and tougher as a result of the invaluable combat experience it has been afforded. With both Hezbollah and Israel under no illusions when it comes to the near certainty of going to war with one another again, it is why Israel is determined to hit its Lebanese foe in Syria with airstrikes as and when it can.
The danger, of course, comes with regard to how these repeated attacks may endanger Russia’s deployment in the country. Indeed, with Russian military forces operating on the same side as Hezbollah in Syria, the danger of Israel’s aggression becoming a catalyst for unintended consequences is ever present.
As the man said, “Great is the guilt of an unnecessary war.”