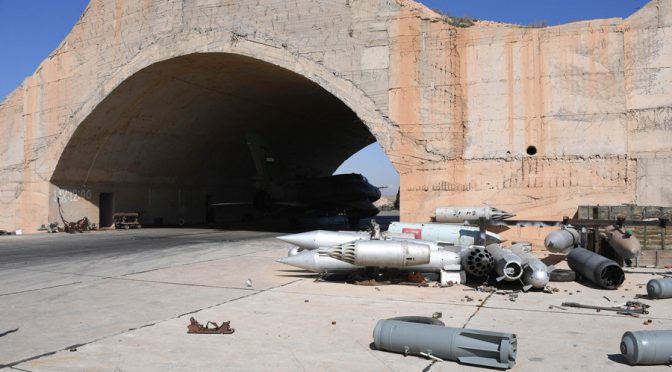 Khazarian shills in the mainstream and alternative media are now saying that it was only a tactical move for Trump to approve the massive airstrikes on Syria just to make him and America looked strong in the eyes of the Deep State and China respectively, because there wasn’t really a single victim, or that the “airfield has been abandoned years ago.”
That’s the problem with people who talk too much and think less. How could Trump and America ever “looked strong” if those airstrikes were indeed targeting an abandoned airfield?
If at all, it would make Trump look stupid, right?
They also said that it was done to intimidate China, whose leader is “negotiating” with the Trump government right now. But such fireworks are very common in China.
China is not negotiating with Trump but is meeting with him from a standpoint of strength, as proven by the Bloomberg reported “sweeteners” that Xi Jinping is bringing with him.
Only morons would swallow a narrative that such provocative measure made in Syria would intimidate any leaders from outside the United States at all. Who could intimidate an economic powerhouse like China at this time?
Certainly, not a bankrupt, Rothschild dynasty subservient United States government, nor its now proven invertebrate pseudo-president.
Remember how you cried in Vietnam.
Trump apologists pretending to be part of the alternative media need to shut their pie holes together with the mainstream fake news media.

They’re just sustaining the false hopes that the “anti-Deep State” Trump has accorded them to, for a while.
It is our understanding that the Deep State has a storyline for both mainstream audience and those who have understood its inner workings, i.e. “Assad is a dictator who kills his own people” and “Trump’s move is merely tactical,” respectively.
As we posted earlier, the Homs governor himself reported at least 9 civilian deaths, including 3 children, and scores wounded, although the Syrian government confirmed only 6 deaths including 3 soldiers.
Likewise, the Russian Ministry of Defense confirmed that there were 6 Mig-23 warplanes damaged, and no, the Shayrat airbase is one of the major military airfields of the Syrian Air Force that has been in use since the outbreak of the US invasion by proxy in 2011.

The reinforced hangars are what mitigated the damage to personnel and war material in Syria, not the “tactical” nature of the US airstrikes.

Shayrat airbase: One of the major strongholds of Assad’s Air Force

MOSCOW, April 7. /TASS/. The US military launched 59 Tomahawk missiles from two US Navy destroyers on Thursday on the Shairat airbase in Syria’s Homs province.
The airfield located some 120 kilometers away from Syria’s capital Damascus is one of the major bases of the Syrian Air Force.
The airfield has a three-kilometer runway and 40 hardened shelters.
The Syrian government forces have never lost control of the airbase since the outbreak of the civil war in 2011.
According to media reports, the Russian aerospace forces occasionally used Shayrat as a stopover base since 2015.

Tactical or not, Trump’s first exercise of manhood through the 59 Tomahawk missile airstrikes inside Syria did not achieve its goals of sending shivers on the spines of Assad and the Syrian people.
https://www.youtube.com/watch?v=75Sod3JcykI
It also made the US position among the community of nations looked ridiculously untenable…

So, how intimidated are the Russians now, Mr. Trump ?
Putin ordered the suspension of any direct contact with the Pentagon to coordinate safe military overflights within the Syrian airspace.

MOSCOW, April 7 /TASS/
About an hour ago, the US military attache in Moscow was summoned to the Defense Ministry to get an official note, which said the Russian side was suspending as of 00:00 hours on April 8 the observance of its obligations under the memorandum of understanding on prevention of incidents and ensuring of flight safety in the course of operation in the Syrian Arab Republic,” he said.
Gen. Konashenkov refuted US media reports claiming Russia had decided to keep the hotline open.
He said the Defense Ministry had sent an appropriate notification to the Pentagon via military diplomatic channels earlier on Friday.

This means that anything radar visible object flying without proper permission over Syrian airspace will be shot down, including that of the US.
Also, Prime Minister Medvedev seems to welcome a nuclear war with the US, this time around.

RT, Published time: 7 Apr, 2017 19:26
The US attack on an airfield in Syria has been conducted “on the verge of a military clash” with Russia, Prime Minister Dmitry Medvedev said, adding that President Trump has been “broken by the US power machine” in just two-and-a-half months.
“Instead of an overworked statement about a joint fight against the biggest enemy, ISIS (the Islamic State), the Trump administration proved that it will fiercely fight the legitimate Syrian government,” Medvedev wrote on his Facebook page.
The prime minister stressed that to pursue this goal, the US is eager to act “in a tough contradiction with international law and without UN approval, in violation of its own procedures stipulating that the Congress must first be notified of any military operation unrelated to aggression against the US.”
The missile strike in Syria has revealed that the current US administration lacks independence and hangs on the Washington establishment that Donald Trump used to strongly criticize during the presidential race and his inauguration speech, Medvedev added.
“Soon after his victory, I noted that everything would depend on how soon Trump’s election promises would be broken by the existing power machine. It took only two and a half months,” Medvedev wrote.
“Nobody is overestimating the value of pre-election promises but there must be limits of decency. Beyond that is absolute mistrust. Which is really sad for our now completely ruined relations. Which is good news for terrorists,” the prime minister concluded.

So, it’s not only that the Pentagon had violated international laws with its recent airstrikes in Syria, yet failed to achieve any military advantage except helping CIA Daesh terrorists control a rich oil field in the area, which incidentally, did not materialize either, Trump himself failed to exercise even the simplest norm of decency expected from a “leader of the Free World,” whatever that means.
To prove a point, the Russian Black Sea Fleet’s frigate, Admiral Grigorovich, returned to the Mediterranean to operate in the region in accordance to the “changing military situation.”

In early-March, the Admiral Grigorovich replaced the Smetlivy frigate as part of the Russian naval task force in the Mediterranean.
The ship carries eight Kalibr-NK cruise missiles, a Shtil-1 missile self-defense system, an A-190 100-mm artillery system, anti-aircraft guns and torpedoes. It can also dock a Ka-27 (or Ka-31) helicopter.

The crews of S-300 and S-400 air defense systems have also shot down cruise missiles launched by an imaginary enemy during an air defense drill held in Russia’s eastern Buryatia republic, according to the Eastern Ministry District press service, on the same day that the US warships were delivering their missiles to Syria.
When countries don’t want to go to war against you, it doesn’t mean they are already intimidated. They just don’t see the point. It’s called Wisdom in the East.