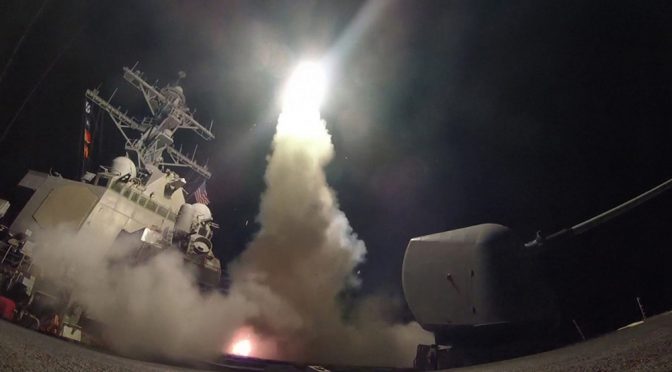 In response to Russia’s mocking of the recent display of US firepower in Syria, under a false pretext of a chemical attack by the Assad government against civilians, Western media published a CIA-Pentagon response that what they’ve accomplished was a “surgical attack” that is in full accordance with existing self-defense, and international humanitarian norms.
In one of the titles, the corporate mouthpiece Bloomberg article tries to underscore the skillful US maneuvers while, at the same time, praising indirectly Trump’s decision to give the go-ahead decisively.

by Anthony Capaccio, April 7, 2017, 9:17 AM GMT+8
Sailing in the eastern Mediterranean, a pair of U.S. destroyers twice rehearsed firing a fusillade of million-dollar missiles toward a Syrian airbase before President Donald Trump signed the order to launch.

Laying down the predicate with “twice rehearsed” meant to project that it must not be some haphazard operation like their airstrikes in the city of Mosul killing hundreds of civilians, but surgical enough and effective.
The phrase “a fusillade of million-dollar missiles” kinda hurt the taxpayers a lot.

Is this a sales pitch already?
Why not? Trump is the man, and Raytheon is the company. The former, it turned out, can decide when it’s time to do so; the latter can deliver a product with high efficiency – 59 out of 60?

The destroyers were in the Eastern Mediterranean but under supervision of the commander aboard the USS George H.W. Bush aircraft carrier in the Persian Gulf.

Oh, yes, the US Deep State godfather truly deserves the honor. He’s always there whenever a regime change needs to occur.

And an hour after that, the missiles hit their targets almost simultaneously, destroying about 20 Syrian aircraft in hangars and on runways as well as petroleum storage at a base that the U.S. says President Bashar al-Assad’s regime had used to launch a deadly chemical attack against civilians on April 4.

The Russians disputed the claim by saying that only 23 Tomahawks hit their targets at the airfield. So, where did the other 36 “million dollar” missiles went?
That’s 36 x $1 million = $36 million of taxpayers’ money that cannot be accounted for.
The good thing is, it did not result to a number of casualties. Praise, Trump!

The U.S. used the latest-model Tactical Tomahawks, which can be redirected in mid-flight, transmit images to commanders and loiter over a potential target area, according to accounts by U.S. military officials who briefed reporters or spoke in interviews. They asked not to be identified discussing operational details.

“This operation is a reminder that forward-deployed U.S. Navy ships, operating from international waters, have various ways of affecting events ashore, including Tomahawk cruise missiles” that can be fired “without putting additional boots on the ground or risking pilot lives,” Ronald O’Rourke, a military naval analyst with the Congressional Research Service, said in an email.

War is always justified. You are all in safe hands. So, just move along.

Assuming Correctly
The fusillade of Tomahawks aimed at the Shayrat airfield was one of the options prepared by U.S. Central Command in about a day after Trump condemned the April 4 gas attack, on the assumption the White House might want to act fast to back up the president’s implied threat, one of the officials said. That proved correct when the administration formally requested that the Pentagon ready alternatives.

Attacks like that has been pre-planned months ago, all independent military experts agree.

Once Trump gave the go-ahead order for the Tomahawk strike, the operation moved at a rapid pace. Shortly after 4:35 p.m. New York time on Thursday, Army General Joseph Votel, the head of Central Command, received a call from Marine Corps General Joe Dunford, chairman of the Joint Chiefs of Staff, telling him to execute the attack. Votel, who was at an event on the U.S. East Coast, passed the order on via a secure video link even before the White House’s written authorization, according to one of the officials.

Be afraid. Be very afraid of Trump’s America.

The 59 missiles launched — a 60th malfunctioned — hit an equal number of targets at the Shayrat air field, which one of the military officials said had been associated with Syrian government chemical attacks since 2013.

Yes, only one missile malfunctioned as opposed to the still unaccounted for 36 missiles missing, according to the evil Russians.
Finally, here’s the kicker.

The U.S. notified the Russian military in Syria before the attack because it had personnel and helicopters at the base in a separate area that the Tomahawks didn’t hit. One of the U.S. officials said the Pentagon had no intelligence indicating that the Russians tipped off Syria to the looming attack.

Boom!
The “US officials” and Bloomberg are hoping that this should put Russia in the defensive position, just in time for Rex Tillerson’s visit to the Kremlin next week.
Poor Syria, being played around by the biggies.

The Trump administration has described the attack as “proportionate.” An example cited by defense officials: Runways at the airbase weren’t cratered to make them unusable.

That’s justifying inaccuracy, and proving stupidity, all at the same time. Who would fire a million dollar missile to target an airfield, but avoid hitting the runways?
Runway is what makes an airport.
Do you realize that destroying the runway alone could postpone any future attack from that airport far longer than eliminating jet fighters which could be replaced anytime of the day?

Yes, good for Syria, they’re back on their feet again. But Trump has just added more body bags, i.e. a total of 14 people including nine innocent civilians were killed in the US missile attack, to his already long list of people killed in Mosul operation.

The 59 Tomahawks fired was modest compared with the 288 launched when the missile was first used in the Persian Gulf War in 1991. About 725 were fired at Iraqi targets at the start of the 2003 U.S. invasion of Iraq, according to a compilation by Byron Callan, defense analyst for Capital Alpha Partners LLC.

Yeah, $60 million missiles – that’s not enough. The US taxpayers need to spend more.

The Navy says it’s buying the last 100 Tomahawks this year before ending production in favor of upgrades to the inventory and starting development on a successor “Next Generation Land Attack Weapon.”

Precisely.
That’s the war industry looking out for your well-being, free and brave Americans.
To be fair, the Russians were also displaying their wares during the time when the US destroyers were firing their missiles on to Syria.

Sputnik 11:56 08.04.2017
The cruise missiles were fired by Tu-95MS strategic bombers covered by an escort of Su-30SM fighter jets.
“On the closing day of the exercise, the operators of S-400 and S-300PS air defense systems successfully repelled an attack with multiple cruise missiles,” the EMD press service said in a statement.

For destroying a conflicting number of Russian Mig-23s in Ash Sha’irat airbase, Syria, purposely to aid CIA ISIS/Daesh terrorists in the region, the US is doing a free service to the Russian arms industry, too.
The Russian arms industry is second to the US in terms of military exports as of 2016, according to Vlad. Of course, it might be the case that those countries supporting the Russian arms industry just want Russia to have enough muscle to deter its more aggressive Western counterparts.
This means that we need not look at things from a single perspective alone, and should refrain from being a mere cheerleader for a particular side of the conflict.
Surely, there’s a bigger game being played around, and they think we are dumb enough to even notice.

7 thoughts on “Driving a Wedge between Russia & Syria”