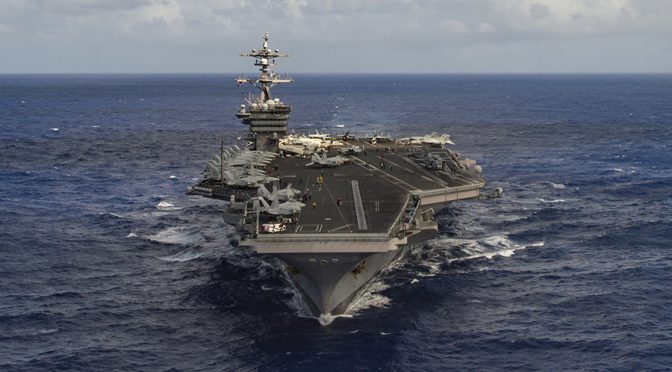 Newly baptized Deep State puppet Donald Trump continues to court a nuclear war by “ordering the US Navy” to send the Carl Vinson Strike Group towards the Korean Peninsula, to deal with Pyongyang’s “nuclear threat.”

“US Pacific Command ordered the Carl Vinson Strike Group north as a prudent measure to maintain readiness and presence in the Western Pacific,” Commander Dave Benham, spokesman at US Pacific Command, told AFP.
“The number one threat in the region continues to be North Korea, due to its reckless, irresponsible and destabilizing program of missile tests and pursuit of a nuclear weapons capability,” he added.
National Security Advisor HR McMaster said on Sunday that sending the group is a “prudent” move, since North Korea “is a rogue regime that is now a nuclear-capable regime.”

But just like in the case of Syria, North Korea has never attack the United States. Its only crime is to stand independently from the Rothschild banking dynasty. So, it must be punished with all sort of sanctions. China has no choice but to help the country by consuming its coal production, although the latter doesn’t really need it.
This doesn’t mean that Kim Jong Un truly represents the aspirations of the North Korean population. He has been properly indoctrinated in Europe. There is even a theory that by regularly conducting missile tests, he is providing the pretext for the West to intervene, recently prompting China to tell Trump that Kim Jong Un is his problem.
China, however, knows that once North Korea capitulates to the West, it will have tanks and foot soldiers right on its door, just like Russia with NATO state neighbors. This could mean that should the US attempts to wrestle its way into Pyongyang, it should spark a potential ELE – extinction level event. Maybe, that will be time that the good citizens of the US Republic start to act. But it will be too late.
That’s fear mongering one might say. The US government will never go that far. But what about miscommunication? Shouldn’t we factor in a possible miscalculation arising from all those periodic provocative actions from both sides?
Should we not consider Murphy’s Law that if anything is bound to occur, or fail, it will?
Asia was never in turmoil as it is, prior to the Westerners’ intrusions in the region. The Black Hand of the Jesuits is truly effective in that regard. The region also did not seek to invade other nations in the West during its prosperous “ancient times” except only in retaliation. But the West’s appetite for war has never been quenched even today, even with the establishment of the United Nations.
How many times did the US bypassed the UN Security Council for its aggressive stance in various regions around the globe?
It must be understood that the UN vote in favor of a “police action” in 1950 against North Korea was itself illegal since Russia was absent for the vote in the Security Council.

“The quorum required for the Security Council under its Rules of Procedure, is all member delegations so that all members must be present or a session cannot proceed. The Americans used a Russian boycott of the Security Council as their opportunity. The Russian boycott took place in defence of the position of the Peoples Republic of China that it should have the China seat at the Security Council table, not the defeated Kuomintang government. The Americans refused to do the right thing, so the Russians refused to sit at the table until the legitimate Chinese government could.
The Americans used this opportunity to carry out a type of coup in the UN, to take over its machinery for its own interests by arranging with the British, French and Kuomintang Chinese to back their actions in Korea by a vote in the absence of the Russians. The allies did as the Americans asked and voted for war with Korea…”

In short, it is the US government that is always seeking trouble by using Kuomintang Taiwan and others to continue antagonizing North Korea, in order to fulfill its ultimate geopolitical ambition in the region, i.e. to contain China, all for the benefit of the Deep Swamp that Trump is yet to drain.
But Trump sees it differently.

North Korea is behaving very badly. They have been "playing" the United States for years. China has done little to help!

Egoistic Trump doesn’t want anybody looking down upon him. He deeply resent people lecturing about things that he believes would put him in a less significant position. His disrespectful attitude towards his Chinese counterpart illustrates this arrogance.

This same attitude is what forced him to drop bombs on Syria days ago, just to illustrate that he’s in charge, even when he is fully aware that by the doing so, he succumbed to the wishes of the Deep State for him to continue the retarded conquest of Syria, for the long planned Israeli expansion in the region.
His behind-the-scenes foreign policy adviser, CFR Chief Richard N. Haass applauds “his decision” on Syria.

Not acting after Syrian CW use defined Pres Obama as reluctant sheriff. Acting has given Pres Trump opp'ty to signal arrival of new sheriff

“Trump’s decision” is in line with Haass’s instruction, a day prior.

This was a scarily prescient op-ed by @RichardHaass on the US response to Syria (via @FT) https://t.co/Mx0PuRb0Us pic.twitter.com/DGMM3RkNDw

This doesn’t mean that the attack was really spontaneous, but rather just one of those predefined plays which have been scenarioed decades ago in one of the climate controlled boardrooms of the Pentagon.
And according to Richard N. Hass, Trump needs to sustain the Syrian invasion.

For Syria, regime change should be long-term aim; near term objectives should be going after isis & building friendly Sunni rebel strength

But, that’s okay, if he has already populated his government and family with Khazarian Jews, and let them decide things for him. After all, it’s really…
Khazarian Israel First.
The Daesh/ISIS assignment in Syria is not going to end soon.

One thing to accept that there is no near term option to oust Assad. But there can be no end to war or terror in Syria so long as he rules

In conclusion, the US government will never be able to “police” North Korea by sending all its warships to the region. It will have a deadly consequence that none would be alive to see it. However, if North Korea is allowed to rejoin the community of nations by removing all forms of sanctions against it, the peaceful outcome will be a lot better for all concerned.
Understand that the North Koreans have already crossed the Rubicon of a possible nuclear war with the West. Otherwise, it would not have started its nuclear program in the first place. More so, the entire East Asian region is notoriously known for the Kamikaze option when pushed to a corner.
One must never forget the bitter lessons of the Vietnam War, Korean War, and WW2, and realize that what is at stake is a totally different monster altogether, now that nuclear arms are in the equation.

“Any use of force or preemptive strikes against North Korea will carry huge ramifications, which would probably lead to a drastically different outcome compared to Syria.” Wang Dong, Associate Professor of International Studies at China’s elite Peking University