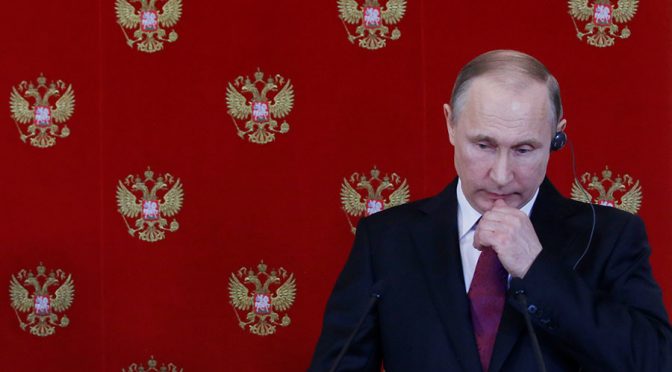 With the Deep State’s desperation at all-time high, no less than Vladimir Putin is expecting more false flag attacks to come.
“It appears that the real reason why has Trump capitulated to the Deep State so quickly is the final BRICS leadership’s decision to start the dumping of the fiat dollar in matters of mutual trade and economic cooperation between the BRICS member countries.”

Published time: 11 Apr, 2017 12:51
Russia has information of a potential incident similar to the alleged chemical attack in Idlib province, possibly targeting a Damascus suburb, President Vladimir Putin said. The goal is to discredit the government of Syrian President Assad, he added.

“We have reports from multiple sources that false flags like this one – and I cannot call it otherwise – are being prepared in other parts of Syria, including the southern suburbs of Damascus. They plan to plant some chemical there and accuse the Syrian government of an attack,” he said at a joint press conference with Italian President Sergio Mattarella in Moscow.

Damascus denied the “chemical attack” allegations, noting that the targeted area may have been hosting chemical weapons stockpiles belonging to Islamic State (IS, formerly ISIS/ISIL) or Al-Nusra Front jihadists.
The incident has not been properly investigated as yet, but the US fired dozens of cruise missiles at a Syrian airbase in a demonstration of force over what it labeled a chemical attack by Damascus.

“President Mattarella and I discussed it, and I told him that this reminds me strongly of the events in 2003, when the US representatives demonstrated at the UN Security Council session the presumed chemical weapons found in Iraq. The military campaign was subsequently launched in Iraq and it ended with the devastation of the country, the growth of the terrorist threat and the appearance of Islamic State [IS, formerly ISIS] on the world stage,” he added.

It was the first time the US had targeted Syrian troops deliberately. The White House says it will repeat military action in response to any possible new chemical weapon attacks.
“The sight of people being gassed and blown away by barrel bombs ensures that if we see this kind of action again, we hold open the possibility of future action,” spokesman Sean Spicer said Monday.
Putin reiterated the call to properly investigate what happened in Khan Sheikhoun, saying that the alleged use of chemical weapons demands one.

“We are planning to address the corresponding UN structure in The Hague and call on the international community to thoroughly investigate all those reports and take appropriate action based on the results of such a probe,” he said.

A separate report of a potential false flag operation in Syria came from the Russian General Staff, which said militants were transporting toxic agents into several parts of Syria, including Eastern Ghouta, the site of the 2013 chemical weapons incident.
“These actions are aimed at creating a new pretext for accusing the government of Syria of more chemical weapons attacks and provoking more strikes by the US,” said Colonel General Sergey Rudskoy, the head of Operations.

In addition to the above scathing warning directly from the Kremlin, the world respected Russian leader also condemns the NATO leadership for being like “bobbleheads” …

‘Nodding like bobbleheads’: Putin slams NATO’s support for US violation of intl law in Syria

The missile strike on Syria was a clear breach of international law, while Washington’s claim that Damascus carried out the chemical attack that the US used as its casus belli is yet to be proven by any hard evidence, Russian President Vladimir Putin said.
“What was the reaction of the NATO allies? All of them are nodding like bobble heads,” Putin said in an interview with Mir 24 TV channel.
“Where is evidence that Syrian troops used chemical weapons? No evidence. And what about the violation of international law? It is an obvious fact,” he added.

… and concluding at a more somber tone.

Putin: Trust between US & Russia degrading under Trump

Published time: 12 Apr, 2017 10:09
Trust between Russia and the US has degraded under the Trump administration, Russian President Vladimir Putin stated. During his presidential election campaign, Trump said he would like the US to have better relations with Russia.
In an interview on Wednesday, Putin said that if Donald Trump had intended to bring about a thaw in US relations with Russia, he has failed to see this intention through.
“I would say the level of trust [between Russia and the US] is at a workable level, especially in the military dimension, but it hasn’t improved. On the contrary, it has degraded,” the Russian president told Mir broadcaster.

With no details being released during the Putin-Tillerson meeting, we can only speculate that indeed the conversation may not be good for Trump and the American public.
Remember, Russia is yet to exact justice for the murder of its four ambassadors in just a span of 3 months during the last days of Obama,

… one of whom was assigned to work with Washington DC.