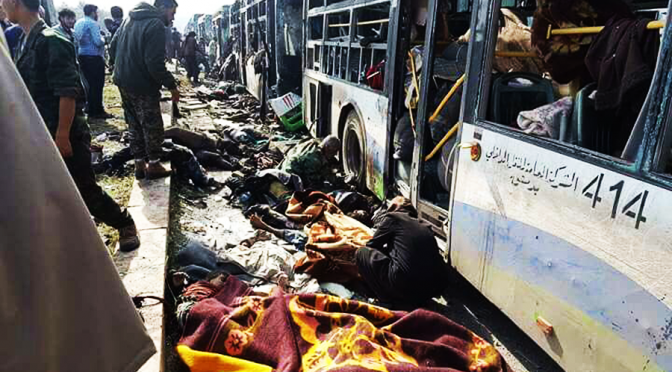 The Khazarian Mafia funded suicide bombing of civilian-evacuees entering the city of Aleppo did not make it to the headlines, or if so, it has been toned down to a level not deserving of a “red line” classification.
Western values do not apply to the serfs of lesser gods.

by Eva Bartlett, April 15, 2017
There are apparently no ‘red lines’ when it comes to the documented terrorism of death squads in Syria, be they the Free Syrian Army (FSA), Nour al-Din al-Zenki child-beheaders, or Jaysh al-Islam (with their love of caging civilians to use as human shields and firing mortars on civilian areas of Damascus and outskirts).
Earlier today, terrorist factions attacks buses carrying civilians from the long-besieged western Syria villages of Kafraya and Foua. Thus far, the death toll is reported to be at least 70, according to U-News, Al Ikhbaria, and Sputnik, the latter which reported:

“The number of victims [in the explosion] is at least 70; over 130 are injured. It is difficult to say as there are many burnt bodies and body parts around the damaged buses,” noting that “hit the Rashidin area on Aleppo’s outskirts. The bus was waiting for entering the city of Aleppo.”
“The blast supposedly was caused by a suicide attacker who detonated an explosive device. The car with the attacker approached the buses disguised as a vehicle transporting food.”

Al Ikhbaria, Syrian TV, has multiple updates on the carnage that was the terrorist attack on these buses carrying civilians, including scenes of the injured civilians in hospital.
“Our Blood is Cheap”: Why Foua and Kafraya Don’t Merit Fair Media Coverage:
The journalist with U-News who sent me photos and videos taken today of the massacre of civilians asked the anguished rhetorical question one asks in such repeated situations:

“Where are the mainstream media? Why don’t they report the barbaric and cowardly terrorist attack on Foua and Kafraya?”

The answer is that the genuine torment these civilians have endured for years will never be fairly reported, it does not serve the agenda of demonizing the leader of Syria and the national army in order to win western public opinion for yet another ‘humanitarian’ intervention which destroys the nation in question and installs chaos in the place of the prior government.
None of the people terrorized by the mercenaries of the NATO/Zionist/Gulf/Turkish alliance over the years will be respected and fairly reported, be they women and children victims of rocket, sniping and mortar terrorism in and around Damascus; Syrian and allied journalists assassinated by the ‘moderates’; civilians of Aleppo for years bombed, sniped and besieged by terrorist factions; or especially liberated civilians from eastern areas of Aleppo whose horrific testimonies directly negate the myth of ‘rebels’, ‘moderates’, or the falsity of Assad as the problem and the Syrian Arab Army as the ‘aggressor’.
As with civilians suicide bombed in Beirut and Homs, Jableh and Tartous, (which I visited in ) the civilians of Foua and Kafraya are rendered by the corporate media either invisible or a sect not worthy of human consideration. Ironically, while Foua and Kafraya may contain a predominate number of Shia muslims, residents of the villages have told me how they intermarried with their neighbouring Sunni Syrians, and shared the celebrations of other faiths’, as is common in secular Syria.
In August 2015, I began to write about the villages, becoming aware of their very serious plight by a friend from Foua and journalists and civilians I came to know from both villages.

“The villages, less than 10 km northeast of Idlib, had already been suffering an over 4 year long siege by al-Nusra and affiliates.
“Until late March, residents—although surrounded by militant factions—still had an access road, thus supplies for their survival. With the militants’ occupation of Idlib at the end of March, the Syrian Arab Army (SAA) had to withdraw forces from bases in the province. Foua and Kafarya became utterly isolated.” (link)

Their being fully besieged and near-daily bombed, and deprivation of critical medicines and essential life needs have been  met with a comparative yawn, an utter silence and disregard of not only the corporate media but also the human rights bodies purporting to care about Syrian civilians.
In January 2016, when overnight media began talking about Madaya (one of the villages from where ‘rebels’ were recently safely evacuated with the full aid and protection of the Syrian government), they also pointedly ignored Foua and Kafraya residents much more dire situation. The theme was starvation in Madaya, blame put on the Syrian government, but as with eastern areas of Aleppo come December 2016, the actual culprits were the terrorist factions hoarding food (and medicines) and holding civilians hostage. [This also occurred in the Old City of Homs, which I visited repeatedly, including one month after the Syrian government enabled safe evacuation to the terrorists who had been occupying the Old City and starving the remaining civilians within.] Little to nothing was said of Foua and Kafraya, besieged and attacked by al-Nusra and cohorts for years prior.
Parts one and two of my initial reports on the villages outline the full, debilitating siege the approximately 20,000 civilians have endured since March 2015 (although the villages were on-off besieged since 2013) and the deliberately sectarian slant MSM reports give if deigning to mention Kafraya and Foua. In contrast, as my Kafraya friend told me:

In that area of Syria there are minorities living together, from about 1,000 years ago. In Kafraya and Foua there are Shia. Before this war, the people of Foua and neighbouring Binnish were very close, they intermarried, celebrated festivals together.
At the time that this all started in Syria, I was home, still a student. We studied at a school in Ma’rat Mesreen, which was a mostly Sunni city—many of them pro-government, by the way—and some Shia. Like with Binnish, our people were friends with those in Ma’rat Mesreen, intermarried with them.
My uncle was working in al-Raqqa, but when the militants took over, he and others went back to Kafraya. The original population of Kafraya was around 10,000. Now, it’s much much more, with IDPs from various areas, like Ma’rat Mesreen, and including many Sunni pro-government Syrians from other villages, but also Shia from surrounding areas.”

Iyad Khuder spoke of the tradition unity of the villages and surrounding area.
People from these two villages have always had good relations with their neighbors—they used to share the Islamic feasts together. No one used to ask about religion, or even to mention the words ‘Sunni, Shia’. But the extremist minority who controlled northern Syria are indoctrinated by Saudi Arabia’s Wahhabi ideology. So, they asked Kafraya and Foua (as a test) to join the ‘revolution’ against the ‘regime’. The people replied, ‘You are free to revolt, it’s your choice. But we also have our choice and we believe it’s a plot targeting the whole country.’ So, the ‘rebels’ consider them targets, have tried to conquer their villages, and have kidnapped many of them.”

Completely surrounded by terrorist factions which near-daily bombed the villages with mortars, Hell Cannon-fired gas canister bombs, and snipings of the sort that left 4 and 6 year old boys (deprived by the terrorists’ siege of medical care) on death’s bed, the siege has meant civilians with critical, but treatable, illnesses are not able to get appropriate medical care, and that families are deprived of sustenance, clean water, heating in winter, and the essential needs of life.
MSM Reporting on Terrorists Murder of Civilians: ‘bus hit’:
Some overdue and poignant scathing critiques of #FakeNews corporate media renditions of such massacres.
An article by Lizzie Dearden for the Independent read:

“An car bomb has hit a convoy of buses carrying civilians evacuated from besieged towns in Syria, killing at least 24 people.
The blast hit the Rashidin area on the outskirts of Aleppo, where dozens of buses carrying mostly Shia Muslim families from pro-government villages were waiting to enter the city.
Photos that were too graphic to publish showed a huge fire raging next to bodies scattered on the ground next to charred buses with blown-out windows, including those of children.”

Imagine if the area in question were a terrorist-occupied area. Dearden’s writing would read something like this:

“A regime-dropped barrel bomb has killed a convoy of buses carrying innocent civilians, mostly women and children, evacuated from rebel areas of Syria. The deadly 8.0 magntitude Hiroshima barrel bomb hit Sunni Muslim families from freedom-loving rebel areas…” and so on.

Do note in the reporting of Dearden and other presstitutes the downplaying of actual documented Syrian civilian deaths at the hands of terrorists dubbed ‘rebels’. Do note the sectarian language (rejected by most Syrians). Do note the implication that acts of terrorism on Syrians in government secured areas of the country must be considered as not credible (but physics-defying alleged school-bombings or alleged chemical weapons attacks should be believed).
Regarding the “photos that were too graphic to publish” please explain to the families of these mutilated Syrians that their graphic murders were distasteful to western sensitivity.
Britain’s state-owned BBC, fond of propagating war porn when serving the NATO agenda, headlined rather blandly: “Syria war: Huge bomb kills dozens of evacuees in Syria”.
Were the bombing in question alleged to have been done by the Syrian army, or Russians, you can bet the headline would read something like:

“Murderous Regime Bombs Innocent Civilians in Rebel-held Area Just Days After Worst Chemical Attack in the History of the World”.

Eva Bartlett is an independent Canadian journalist who investigated and documented the facts on the ground of the Syria. She put the mainstream media to shame when she unleashed a barrage of factual evidence on how the White Helmets were founded in 2013 by a British ex-military officer, and funded to the tune of $100 million by the US, UK, Europe and other states.