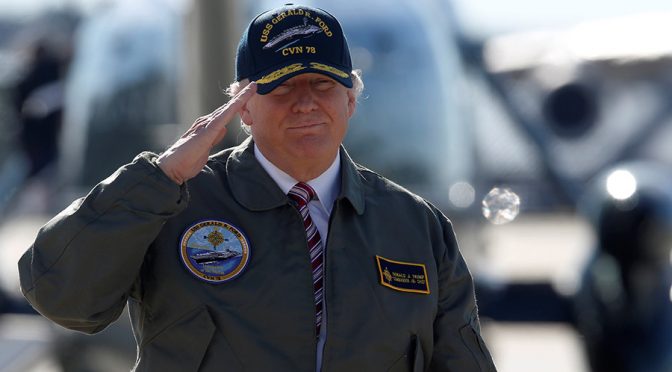 As if it is a badge of honor really to have a military superiority over countries which did not bother doing likewise, in favor of the well-being of its people, and the establishment of a peaceful relationship with neighboring countries, the newly Neocon-certified warmonger Donald J. Trump proclaimed that his government has “no other choice” but to spend more on militarization and strikes.

Our military is building and is rapidly becoming stronger than ever before. Frankly, we have no choice!

The problem is: this is exactly the reason why the US electorate avoided Hillary Clinton and chose instead the businessman celebrity Donald Trump, for his self-advertised corporate acumen versus the Chinese, so that at long last, jobs could return to creative America.
As it is fast turning out, he’s not only flipping on his core campaign promises, he is also approving military proposals like clockwork, and has populated his government not only with Khazarian Jews, but corporate lobbyists as well, in violation to his “draining the swamp” commitment, his supposed anti-lobbyists policy turned out to be more inferior in substance to Mr. Obama’s.

Trump’s ethics pledge issued last month, as noted by Politico, prevents White House officials from lobbying the same agency for which they worked for five years after they leave, however, this still leaves open the possibility to lobby other parts of the government.
Additionally, the pledge prevents lobbyists-turned-staffers from working on issues for which they lobbied for two years. That stands in contrast to Obama’s blanket-ban from 2009 which said lobbyists were entirely banned from joining the administration if they were registered lobbyists in the preceding year.
Trump also changed Obama’s rules meant to prevent staffers-turned-lobbyists from contacting their former government agencies. Under Obama, the ban was for two years. Trump knocked it down to one. And while Obama’s order applied to all staffers, Trump’s rules do not apply to cabinet-level appointees.

Barely 3 months into his administration, Trump has already made it clear when he resigned, “there’s no other choice.”

Ali heard the sound of a child groaning underneath the rubble. It was his daughter, Awra. Her body was charred… https://t.co/HgHwwLfV7H

“NATO is not obsolete anymore. We just sent F-35s to the EU, over the weekend.”
Now, there are only two possible causes of such an early white flag: either he just found out directly from Xi Jinping that America owes China more than he knows,

… or that he is just another moron, like most of his predecessors were.

A Government of Morons

What are we to do, what is the world to do, when we have utter morons as Director of the Central Intelligence Agency, as President of the US, as National Security Adviser, as Secretary of Defense, as Secretary of State, as US Ambassador to the UN, as editors of the New York Times, Washington Post, CNN, NPR, MSNBC? How can there be any intelligence when only morons are in charge?
Stupid is as stupid does. The Chinese government has said that the moronic Americans could attack North Korea at any moment. A large US fleet is heading to North Korea. North Korea apparently now has nuclear weapons. One North Korean nuclear weapon can wipe out the entirety of the US fleet. Why is Washington inviting this outcome? The only possible answer is moronic stupidity.
North Korea is not bothering anyone. Why is Washington picking on North Korea? Does Washington want war with China? In which case, is Washington kissing off the West Coast of the US? Why does the West Coast support policies that imply the demise of the West Coast of the US? Do the morons on the West Coast think that the US can initiate war with China, or North Korea, without any consequences to the West Coast? Are even Americans this utterly stupid?
China or Russia individually can wipe out the US. Together they can make North America uninhabitable until the end of time. Why are the Washington morons provoking powerful nuclear powers? Do the Washington morons think Russia and China will submit to threats?
The answer is: Washington is a collection of morons, people stupid below the meaning of stupid. People so far outside of reality that they imagine that their hubris and arrogance elevates them above reality.
When the first Satan 2 hits Washington, the greatest collection of morons in the world will cease to exist.
The world will breathe a huge sigh of relief.
Bring it on! Come on morons, eliminate yourselves! The rest of us cannot wait.

To prove that the continued US military drumbeats are nothing but the death throes of a dying empire, both Russia and China trolled the USS Carl Vinson in East China Sea, as the latter “confronts the North Korea menace.”

Sputnik, 03:49 17.04.2017
Beijing and Moscow have launched intelligence-gathering vessels to follow the USS Carl Vinson aircraft carrier as it travels toward the Korean Peninsula, according to numerous sources in the Japanese government.

The nuclear-powered aircraft carrier and its group are believed to be in waters around the East China Sea, heading north toward the Korean Peninsula.
China and Russia, which prioritize stability on the Korean Peninsula, have expressed their concern over the tough US stance towards North Korea, with Russian Foreign Minister Sergey Lavrov saying the issue should be resolved peacefully through political and diplomatic efforts.
The dispatch of the intelligence-gathering vessels may be aimed at sending a warning signal to the United States, reports have speculated.

Either China, or Russia, could have sabotaged the NoKor missile test with electronic warfare, to avert a full nuclear war with an equally moronic White House. It was Russia which convincingly displayed its e-warfare superiority by disabling the USS Donald Cook’s elite Aegis Missile Defense System in the Black Sea, years ago.

And the “mother of all bombs” or MOAB GBU-43 of the United States can only shatter the size equivalent to the epicenter of the Russian “father of all bombs” or Aviation Thermobaric Bomb of Increased Power (ATBIP) which has a far more destructive power equivalent to 44 tons of TNT, first tested in 2007, against 12 tons of TNT in the case of the GBU-43. It has a blast radius of over 300 meters compared to the MOAB’s 150-200 meters.
What this means is that, this time around, the BRICS Alliance will not tolerate the US military to bypass the UN Security Council anymore, as it did during its naval strikes in Syria, days ago.

So, knowing that you can’t monopolize military power and force everyone’s submission to your whims, why would you try to antagonize the situation even when they are all trying to establish good relationships with you?
Now that Trump has capitulated to the Dark Swamp, it is therefore incumbent upon the people of the world to unite, formulate and take the necessary actions by themselves in order to prevent a total planetary catastrophe.
If the Shadow Brokers and allied groups could inflict damage on the intelligence community by releasing the NSA eavesdropping tools to the Dark Web, they can also hack the missile control department of the Pentagon, as the latter claimed to have done just the same to North Korea, yesterday.

10 thoughts on “We Have No Choice Other Than Military Buildup, Posturing & Strikes | Moronic Neocon Trump”