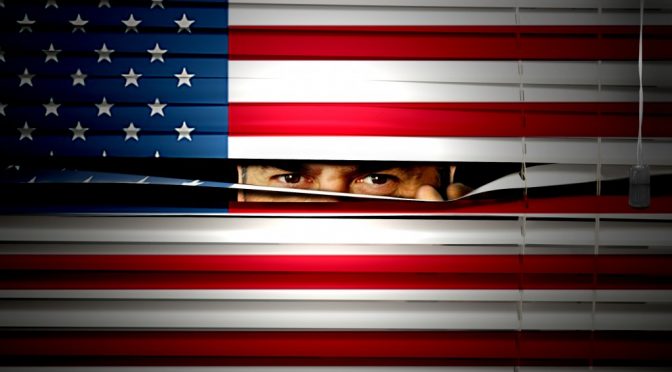 If you take it to heart all that’s been happening inside the United States, the European Union, and in the Middle East, you’ll fall into a depression which you may not be able to recover in time.

Understand that inducing psychological stress on the population is one of the potent weapons of the enemy. Forcing you to raise the white flag of surrender by projecting their total control of the government and institutions should be too obvious by now.
We believe that the best response other than confronting the enemy head on would be to elevate ourselves into a winning position, and not stick around with the same system that they are already in full control of. It is absolutely unwise to try to reform a system that can be hijacked by any aggressive forces, anytime they want.
Establishing a parallel system that does away with all the limitations of the old, like the internet in lieu of the corporate media, is the only way to go.
Other options will surely come when the mind has rested. So, you may opt for a long vacation for the time being, like what Louis Marinelli of the Independent California Movement is doing.

Natasha Bertrand Apr. 17, 2017, 6:31 PM
The leader of California separatist group Yes California announced in a 1,600-word statement on Monday that he “intends to make Russia” his “new home” and is therefore withdrawing his petition for a “Calexit” referendum.

Louis Marinelli, who has spearheaded the Calexit campaign since 2015,  set up a makeshift embassy in Moscow in December in partnership with far-right Russian nationalists who enjoy Kremlin support while promoting secessionist movements in Europe.
“I have found in Russia a new happiness, a life without the albatross of frustration and resentment towards ones’ homeland, and a future detached from the partisan divisions and animosity that has thus far engulfed my entire adult life,” Marinelli wrote on Monday. “Consequently, if the people of Russia would be so kind as to welcome me here on a permanent basis, I intend to make Russia my new home.”
He added that he will “not return to California in the forseeable future,” so “it is only proper” that he withdraw the Calexit ballot initiative petition and “allow a new petition, free from ties to me and drafted by others, to be resubmitted at future date of their choosing.”
… “We don’t think that Russia needs to be an enemy of California, or that it even is one to begin with,” Marinelli said. “The idea that Russia is an enemy of the US — that’s a Cold War mentality.”
Marinelli, who campaigned for Democratic candidate Bernie Sanders but said he ultimately voted for President Donald Trump, described Yes California as a progressive initiative aimed at establishing a “liberal republic” independent of the United States… Marinelli reiterated on Monday that he does “not wish to live under the American flag,” adding that his “frustrations” with the American political system have now pointed him toward Russia.
“I had long planned to eventually return to occupied California and struggle for her independence from the United States so we could build the kind of country that reflects our progressive values,” Marinelli wrote. “However, while my frustration, disappointment and disillusionment with the United States remains, these feelings now point me in a different direction.”
He added that he hopes that “after the false allegations about me vanish, and after this period of anti-Russian hysteria subsides,” it will be “said of this campaign that we spoke the truth” and “set in motion a series of events that led California to independence from the United States.”

The whole idea is not to fall to the “if you can’t beat them, join them” trap. That’s only reserved for the weak, and traitors to freedom and humanity itself.
We must take this opportunity to rise instead, and show the enemies of freedom what erect human beings are truly capable of. We should stop feeding evil and all that it represents, by creating another world of good and wise.
If in the course of living independently off-the-grid, the fascist corporate government will come knocking at your door, with the full intent of doing you harm — that should be the best time you give them hell. But before that even happens, you can increase your winnability by engaging a greater number of people into your cause.
Imagine, if others are seeing the benefits and real value of your efforts along the way, and be open to engage them in a collaborative fashion, you should be able to pack a bigger punch to the old system.
As long-time guests on this website have known, we are already making healthcare virtually free by employing eTherapy protocols described in our healthcare website. That should free everyone from the high costs of hospitalization and danger of mainstream medicine.
The delay in the constructions of nuclear fusion-fission hybrid system around the globe is not acceptable. Not everyone could replicate Keshe plasma systems.
However, one can also do a “brute force” approach and buy a complete industrial type HHO system; add a second alternator, or solar panels, to your car; explore the use of supercapacitors in parallel with the installed car battery, so that you can have enough DC power on demand, to split water into HHO gas and be free from oil cartels for good.
An independent food production can also be done with vertical farming for urban dwellers, and permaculture if adequate farmland is available.
Establishing a local exchange trading system [LETS] should facilitate the exchange of goods and services away from the bankers.
These three independent sources of food, healthcare, and energy alone are enough to free oneself from corporate tyranny which continue to plague the population. Having a parallel debt-free system for exchange should bankrupt the corrupt system for good.
Again, that’s for people who are not ready yet for a protracted civil war, or when war veterans remain apathetic to the whole situation. A surgical covert operation targeting specific personalities would have been the most preferable course of action.
Nobody said that all of the above are going to be easy. No real revolution actually is. But there’s nothing worse than prolonging the agony.