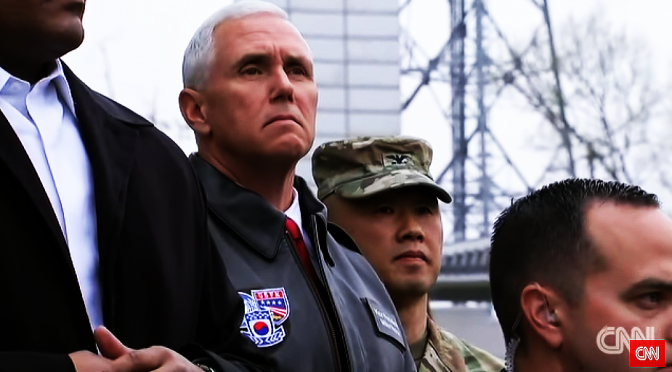 We were shocked yesterday hearing VP Mike Pence made threatening remarks against North Korea, and a trip to the most militarized border on the planet, knowing that any nuclear war with the latter would certainly spill over its borders with China, Russia, and the rest of East Asia.

Certainly, not all Americans are concerned with that scenario considering that, just like all wars before it were all fought outside of the United States, a war with North Korean now will be just between the Koreans, and may be a few American cannon fodders behind the front lines.
But not Paul Craig Roberts, who served as the Assistant Secretary of the Treasury for Economic Policy under President Reagan in 1981, and saw the folly of war in all its forms, in every place it is waged.

Paul Craig Roberts, April 20, 2017
In my long experience in Washington, vice presidents did not make major foreign policy announcements or threaten other countries with war. Not even Dick Cheney stole this role from the weak president George W. Bush.
But yesterday the world witnessed VP Pence threaten North Korea with war. “The sword stands ready,” said Pence as if he is the commander in chief.
Perhaps he is.
Where is Trump? As far as I can tell from the numerous emails I receive from him, he is at work marketing his presidency. Once Trump won the election, I began receiving endless offers to purchase Trump baseball caps, T-shirts, cuff-links, coffee mugs, and to donate $3 to be entered into a raffle to win some memorabilia. The latest offer is a chance to win one of “personally signed five incredible photographs of our historic and massive inauguration.”For Trump, the presidency is a fund-raising device. If his VP, National Security Advisor, Secretary of Defense, UN Ambassador, CIA Director, whoever, want to start wars wherever, that’s just more memorabilia to raffle off for a $3 donation.
As a result of Trump’s failure to govern his own government, we have VP Pence telling Russia and China that there could be a nuclear exchange on their borders between the US and North Korea. Although Pence is not smart enough to know, this is not something Russia and China will accept.
Washington worries about North Korea having nuclear weapons, but the entire world worries that Washington has nuclear weapons. And so many of them. World polls have shown that the majority of the world’s population are far more concerned about the threat to peace posed by Washington and Israel than by Iran, North Korea, Russia and China.
Pence prefaced his “the sword stands ready” remark with “the United States of America will always seek peace,” which after Serbia, Somalia, Afghanistan, Iraq, Libya, Yemen, Pakistan, and Syria is as false a statement as it is possible to make. From Washington’s perspective it is always Washington’s victims that are “reckless and provocative,” never Washington.
The US stands for war. If the world is driven to Armageddon, it will be Washington, not North Korea, Iran, Russia, or China, that brings life on earth to an end.

Why has the US kept on provoking the North Koreans when the Korean Peninsula is best left to their own way of resolving their differences, as they have been doing before the US applied all sorts of political pressure against the pro-US Park administration?

As we have said days ago, the recent failed missile test by the North Koreans may have been caused by the use of an electronic weapon on board a Russian reconnaissance ship that was reported to be shadowing, together with its Chinese counterpart, the USS Carl Vinson, on the day of the test.

Every recon ship is equipped with powerful radars, which could be used to emit radio frequencies that could disable the flight controls of any missile, or a plane.
In response to this latest US provocation, China has conducted live fire exercises with a host of weapons on one of its new destroyers in the Yellow Sea, which forms North Korea’s western border.
https://youtu.be/jUrFf4gUfjo
Incidentally, a US pilot from USS Carl Vinson successfully ejected from his F18 jet’s crashing into the Celebes Sea, Southern Philippines, yesterday. Was it China’s radar system in the Spratlys that sabotaged the F16 flight controls this time around?
Is this why Trump did not do it himself, so that he could spare himself from the humiliation, as the ever changing route of the USS Carl Vinson suggests?

A US supercarrier deployed by President Donald Trump to deter North Korea did not reach the Sea of Japan because White House and Department of Defense officials failed to communicate effectively, media reported.

After a potent mix of bad communication and general confusion concerning the whereabouts of the US Navy’s USS Carl Vinson, the commander of the group said via Facebook that the carrier will indeed extend its deployment to “provide a persistent presence” off the Korean Peninsula.

What this means is that the Pentagon is scrambling for the best PR narrative to feed its media while dealing with the reality that it is losing control of its imperial pawns in East Asia.

South Korea is in the process of electing a new president which is projected to be friendly to the North.