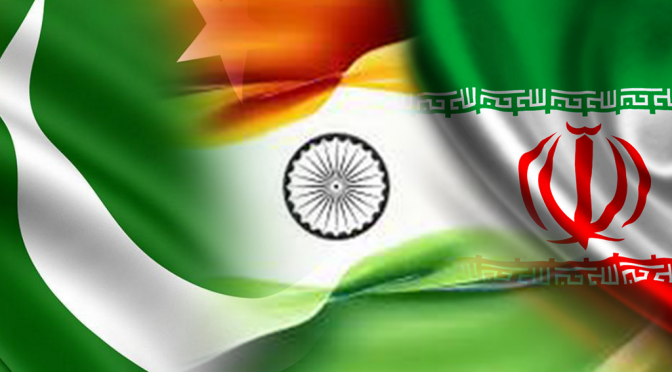 Pakistan and India are two nuclear countries locked in decades of Western induced political intrigue. That may become history soon as the two traditional enemies begin rubbing their elbows with the rest of the members of the Shanghai Cooperation Organization (SCO).
The China-led Shanghai Cooperation Organization (SCO) is one of those organizations which are implementing the humongous “One Belt, One Road” project, which aims to revive the ancient Silk Road that facilitated the peaceful exchange of goods and culture across Eurasia, between 120 BCE – 1450s CE.
BRICS is consist of countries, Brazil, Russia, India, China and South Africa.
Considering that the “B” in BRICS has been compromised by a Wall Street coup a year ago [here], the group can only extend its membership through the SCO, and for the group to provide a mechanism for India and Pakistan to talk about how they can cooperate from the standpoint of mutual benefit is a welcome development indeed.

ASTANA, April 21. /TASS/. The accession of India and Pakistan to the Shanghai Cooperation Organization (SCO) will make history and increase the organization’s global influence, Russian Foreign Minister Sergei Lavrov said on Friday following the Astana meeting of the SCO Foreign Ministers Council.
“We have considered a package of documents to be committed to the heads of state for approval, first and foremost, these documents concern decisions on completing the membership process for India and Pakistan,” the Russian top diplomat said. “It would be no exaggeration to say that it will prove to be a historical event which will increase the organization’s global influence. After India and Pakistan become members, the SCO will include as many as 43% of the world’s population while its member states will account for 24% of global gross domestic product.”
Lavrov said that Friday’s meeting had been “the decisive stage of the preparations for the next SCO summit” scheduled to be held in Kazakhstan’s capital of Astana on June 8-9.
The Declaration on the Establishment of the Shanghai Cooperation Organization was singed in China’s Shanghai in June 2001 by six founding states – Russia, China, Kazakhstan, Kyrgyzstan, Tajikistan and Uzbekistan. Afghanistan, Belarus, India, Pakistan, Iran and Mongolia currently enjoy observer status while Sri Lanka, Turkey, Azerbaijan, Armenia, Cambodia and Nepal are dialogue partners. The membership process of India and Pakistan began in 2015.

ASTANA, April 21. /TASS/. Iran now fully meets the criteria of Shanghai Cooperation Organization membership, Russian Foreign Minister Sergey Lavrov said after a meeting of the SCO foreign ministers on Friday.
“Iran is next in line (for SCO membership). Many said so today. It has settled all issues related with UN Security Council sanctions,” Lavrov said. “Now it is in full compliance with SCO membership criteria. We hope that the heads of state will be able to consider the beginning of the procedure to make Iran a full-fledged member (at the SCO summit – TASS) in Astana in June.”
Among other documents discussed by the SCO foreign ministers, Sergey Lavrov singled out a draft convention on countering extremism. “This is a very important and innovative document, which formulates for the first time the tasks to counter extremist ideology, extremism as a phenomenon that undermines countries’ stability,” he said. We hope that this convention will too be approved by our countries’ leaders.”

Aside from countering extremism, which involves sharing intelligence data and taking coordinated actions against those who are behind terrorism in every member state, the sheer size of their economies and population would be a formidable force to reckon with.

Kazakh president speaks in favor of admission of India, Pakistan, Iran to SCO

MOSCOW, June 23. /TASS/. Possible admission of India, Pakistan and Iran to the Shanghai Cooperation Organization (SCO) is an important step in the development of the Eurasian Economic Space, President of Kazakhstan Nursultan Nazarbayev told TASS.
In an interview with First Deputy General Director of TASS Mikhail Gusman the Kazakh leader said: “The Shanghai Cooperation Organization is a very important organization across the Eurasian space … Now it is a very important step – in Tashkent, we will admit new members: India and Pakistan. After it we are going to consider the terms of admission of Iran … It is a response to the challenge of the times.”

Political intrigue has been rendered ineffective now that the geopolitical giants are talking to one another, peacefully.
This is not good for the Grand Chessboard of Zbigniew Brzezinski who prefers the Balkanization of Eurasian states, so that the Khazarian Mafia could exploit the massive gas and oil reserves in the region.
With China and Russia initiating peaceful collaboration and protecting this region from Western exploitation simply means the complete collapse of Western hegemony.
Add to that is the highly coordinated move to dump the fiat dollar, and the West will have a perfect storm.

These are the reasons behind the continuing #RussiaDidIt Western media hysteria.
Trump, on the other hand, is torn between cooperating with China, and calling it the currency manipulator. His closest adviser Ivanka Trump, whom he admitted to have prodded him to drop Tomahawk cruise missiles on Syria, has a possible conflict of interest working in the White House and having business with China, all at the same time.

WASHINGTON — The Trump family has vowed to keep its vast financial interests separate from the government. But on Tuesday, a possible conflict of interest came to light involving the president’s daughter and top adviser, Ivanka Trump.
China gave her business potentially lucrative provisional trademark approvals the day she and President Trump were having dinner with the Chinese president at the Trump estate in South Florida.

Not only that, Trump himself has financial interests in China, too.

BEIJING — President Trump has won preliminary approval to register 38 new trademarks in China for industries including restaurants and advertising, business interests that could add to criticism over potential conflicts.
As a businessman, Mr. Trump has amassed a vast portfolio of trademarks around the world, as he seeks to protect his brands and his products. Those trademarks, at times, clash with the vision of a populist president who has espoused an “America First” strategy.
China has been among the biggest targets for his business prospects. Including the latest batch, his companies have filed for at least 130 trademarks in China since 2005 for restaurants, bars, hotels, brokerage services, advertising and management consulting.

The man is all over the place. He just profited from the rise of Raytheon stock value after the massive bombings in Syria.
We can forgive all of that if only he had pursued his “draining of the swamp” right off the bat. But until now, only those die hard Trump fanatics continue to dream that that is really the case “behind the scenes.”
But that is not what’s happening right in front of our faces.

“There can be no doubt in the international community’s mind that Syria has retained chemical weapons in violation of its agreement and its statement that it had removed them all. There is no longer any doubt,” Mattis told reporters.

“Those who don’t know history are doomed to repeat it.” ― Edmund Burke

The American Dream lives on.