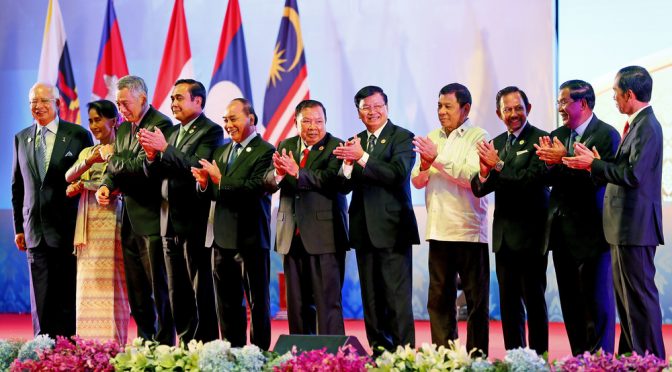 The current chairman of the ASEAN Summit 2017, Philippine President Rodrigo Duterte, is defying Western pressure to invoke the Hague Tribunal UNCLOS ruling that is aimed at controlling China’s energy and trade route in the South China Sea.
The Philippine’s decision to bring the South China Sea issue to The Hague Tribunal was made upon the prodding and funding of the US, reports said. This was part of the aggressive move to “Pivot to Asia” of the Obama administration.
Instead of using the original draft Chairman’s Statement…

… of which the Chinese Embassy in Manila protested due to its close reference to the Hague ruling, was asked for a more acceptable phrase, subsequently submitted and refused to, it now says,

“We reaffirmed the importance of peaceful resolution of disputes and the supremacy of law and the primacy of rules in the behavior of responsible states.”

The Chinese government’s request for a toned down ASEAN statement is meant to placate its own people’s nationalistic rhetoric. For ASEAN to accommodate such request only illustrates the close coordination of all sides to the SCS conflict which should deter any possible escalation by third parties.
This will pave the way for the rules-based Code of Conduct in the South China Sea (or West Philippine Sea) which the group will pass by June this year. The relevance of the COC-SCS is anchored upon the ASEAN’s desire to formulate its own rules and not be a subject to the conflict of the geopolitical giants, i.e. China and United States.
This fundamental desire was verbally forwarded to the West in the introductory speech at the 14th ASEAN Leadership Forum held at the Manila Hotel, Philippines…
https://youtu.be/lMOTP5tzr28?t=1m34s
“In the final analysis, we took note that ASEAN should not be a proxy for Big Power rivalry, but instead be the forum for Big Power dialogue.”
This collective defiance of the ASEAN member states to the pressure of Western “experts and critics” is a slap to the US hegemonic tendencies in the region.
The Philippines is holding the chairmanship of the ASEAN 2017 Summit and is hosting the group’s 50th anniversary this year.
Here’s the Philippine President Duterte’s speech at the opening of the ASEAN2017 Summit earlier today…

More than a week ago, the government armed forces successfully neutralized Abu Sayyaf’s attempt at disrupting the various ASEAN activities held in Bohol, one of the world renowned tourist hubs in the country.

Metro Manila (CNN Philippines) — One of the leaders of the Abu Sayyaf who was involved in the kidnapping of foreigners was killed in the Bohol firefight, the military confirmed Wednesday.
The death of Muammar Askali, also known as “Abu Rami” is a “major blow” to the bandits and their plans to sow terror, said Armed Forces of the Philippines (AFP) Chief General Eduardo Año.
Rami was among the six Abu Sayyaf killed by joint military and police forces in a firefight that began early Tuesday in Barangay Napo, Inabanga, Bohol. Three military troops and one policeman were killed in the clash. Año added troops recovered another body at the site of the encounter.
… [AFP Chief of Staff] Año says Rami has led kidnappings of foreigners and Filipinos in Samal Island [Davao] on September 2015 and in Sabah on November 2016.

This skirmish, although preemptively deterred from carrying out its subversive goals, has conveniently provided the West to issue economically disruptive travel advisories, as a way of punishing the independent foreign policy of the Duterte government, in much the same way that they imposed sanctions against non-Deep State compliant countries, i.e. Syria, Iran, Venezuela and Russia.
Abu Sayyaf is a CIA-organized and ISIS affiliated terror group known internationally for its high-profile kidnap for ransom activities.

Also, a few hours ago, the presidential hometown City of Davao experienced a 6.8 magnitude quake, hours before the president Duterte’s opening speech at the summit.

A massive earthquake occurred on Saturday morning near Mindanao, according to the US Geological Survey.
The quake occurred at a depth of 10 kilometers at about 4:23 a.m. local time.
Meteorologists said a quake of this power could produce tsunami waves along the Filipino coast.
It was first reported to be a 7.2 magnitude quake until it was later revised as 6.8.

The Pacific Tsunami Warning Center announced “dangerous waves” could be imminent for everything within a 300 km radius of the earthquake’s origins.

It must be understood that the Duterte government’s independent foreign policy applies to both the US and China, and all other countries as well.  Proof of that is the country’s defense minister defiance over the Chinese Coast Guard’s challenge while flying in to Pagasa Island, among the 9 islands long occupied by the Philippines.

China reportedly warned the Philippine planes that they were entering the periphery of Chinese installations, and to avoid mishap they should turn around.

In response, the Philippine aircraft messaged back, stating that they were flying over territory belonging to Manila.
“Those were just exchanges and no untoward incident happened,” Lorenzana told reporters, adding that such instances are normal, amid the unresolved territorial conflicts in the South China Sea.
The incident occurred just 25 kilometers (15 miles) away from the Chinese-held Subi Reef, located in the disputed Spratly island chain.
When asked by AP what he thought of the bird’s eye view of China’s development of the Subi Reef – one of the numerous man-made islands that Beijing has built across the Spratly island chain – Lorenzana gave a nod to Beijing’s resolve.
“A grudging admiration to the Chinese for their resolve and single-mindedness to bolster their claims,” he said. “I wished we had the same.”

The Duterte government aims to establish its foothold on the 9 or so islands already under its control in more concrete terms, as China and Vietnam are already doing.

Along the line of pursuing an independent foreign policy, the next US-Philippine Balikatan military exercise will also be held in the eastern part of the Philippines instead of in the Western Philippines facing the South China Sea, as was the traditional spot for the annual US provocation protocol.
The eastern part of the Philippines is the point of entry of the most destructive typhoons in the country’s history. It is only fitting that the Philippine military, in this occasion, has decided that they, together with its US counterparts, will only perform humanitarian aid and rescue simulations instead of the usual arms industry marketing ploy. i.e. live fire war games.
Ironically, the US wants the Philippines to use the Hague’s favorable UNCLOS ruling to assert its sovereignty, while the same is making it as a leverage for its unwelcome “freedom of navigation” naval sorties, even if it’s not one of the signatories of the UNCLOS treaty.
China is.