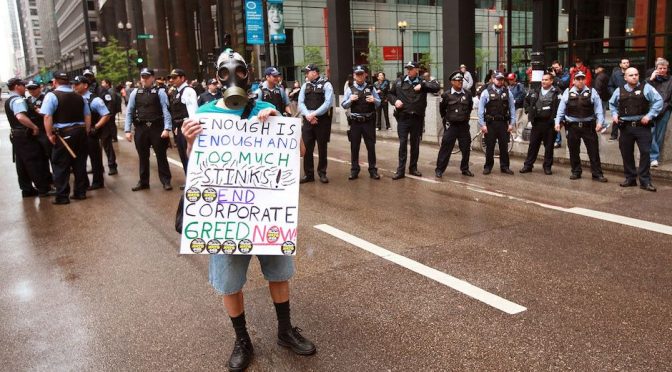 Today, May 1st 2017, the world labor movements commemorate once again their tangible contribution to our collective development as a human species. This is also the day when they blow their horns on the massive inequality and the continued exploitation of the labor force.
There was never a year when the movement celebrated this day for the kindness of the Corporatists. It doesn’t exist. That’s never the intention.
The May Day celebration has its pagan roots, which traditionally marked the return of spring, and is actually performed with the girls circling and dancing in jubilation around a pole, or the Phallus. 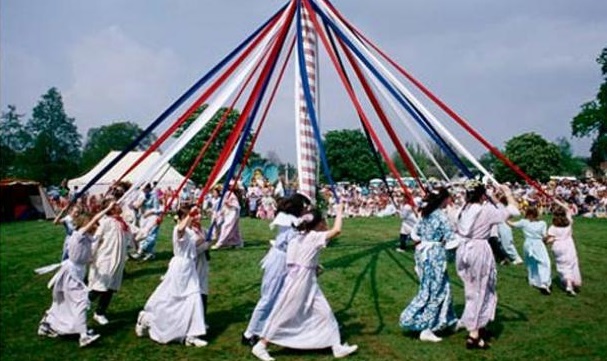 Viewed from the top, the ribbons signify the sun rays.
This ancient practice is carried on by the most vicious Usurper of them all.

The Vatican has its own Phallus at the center of the Ovum, and not only the ladies are dancing on its palm, but every living soul on this planet. Even those who persevered just to get closer to the King and be allowed to enter the temple of the High Priest are mere slaves, too, in the larger scheme of world affairs.


The establishment of different religious groupings has been the earliest tool for social control. However, this divide and conquer method have its limit in the growing awareness of the subjects.
The era of the Reformation came as a shock to the Vatican-led world order of the day. This was started in 1517 with the publication of the Ninety-Five Theses by Martin Luther, and continued on by John Calvin, Huldrych Zwingli, and other Protestant reformers in the 16th century. The Reformation Movement would later be hijacked by the Jesuits by embedding itself with Freemasonry.
The underlying idea is to prevent the full destruction of the Roman Empire, disguised as the Vatican Church, by transferring power perceptively away from the Crown itself and into the Corporation, i.e. the management of the working class, or slaves, from the direct control of the monarchies and the dukes at that time, into a shell of private corporations, which they will ultimately control from the top.

To understand fully how we’ve been manipulated to believe that we are free, we need to take a quick peek at the Roman Empire before it went underground.

Slavery in ancient Rome played an important role in society and the economy. Besides manual labour, slaves performed many domestic services, and might be employed at highly skilled jobs and professions. Accountants and physicians were often slaves. Greek slaves in particular might be highly educated. Unskilled slaves, or those sentenced to slavery as punishment, worked on farms, in mines, and at mills. Their living conditions were brutal, and their lives short.
Slaves were considered property under Roman law and had no legal personhood. Unlike Roman citizens, they could be subjected to corporal punishment, sexual exploitation (prostitutes were often slaves), torture, and summary execution. The testimony of a slave could not be accepted in a court of law unless the slave was tortured—a practice based on the belief that slaves in a position to be privy to their masters’ affairs would be too virtuously loyal to reveal damaging evidence unless coerced. Over time, however, slaves gained increased legal protection, including the right to file complaints against their masters. Attitudes changed in part because of the influence among the educated elite of the Stoics, whose egalitarian views of humanity extended to slaves.
Roman slaves could hold property which, despite the fact that it belonged to their masters, they were allowed to use as if it were their own.[2] Skilled or educated slaves were allowed to earn their own money, and might hope to save enough to buy their freedom.[3][4] Such slaves were often freed by the terms of their master’s will, or for services rendered.

So, what has changed really?
Isn’t that essentially the prevailing system we still have today?
Contrary to what most of us consider to be our private property, from the real estate property and the car we’ve been driving from and to the workplace, we don’t really own them. We are mere tenants to the land we paid for from the so many years of toil. We still need to pay for “our own property’s” use through regularly updated taxes, registration fees and licenses to the corporate government, which is at the very top is wholly controlled by the Corporatocracy — a collection of 147 mega-corporations, owned and operated ultimately by bankers, which themselves are accountable only to one entity, i.e. the Vatican Bank.
They were able to do this elaborate sleight of hand by conscripting only the best minds of the day into their fold. The intellectual elite conscripts understand how the mind works, and how it can be fooled. While each of them might belong to a separate, or a highly compartmentalized team, but at the very top, only a few old men are waving the baton.
The relationship between the Jesuits, Knights of Malta, Freemasons, Knights of Templar, and the Rothschild Khazarian Mafia, is fairly well established, and the lines between them has been blurred over time.
So, if Donald Trump is a Freemason, he is also working for the Jesuits and other stakeholders of the Empire…

… as all his counterparts in Europe are.


Indeed, the Jesuits and Freemasonry continue to play their cloak and dagger games until today. And it serves us better if we assume that we are much better off taking care for ourselves than trust any of them.
In response to the Reformation Movement, another Order must be established by these various control freak European secret societies. Since then, the global game between serfs and landlords had been upgraded.
As a result of this major system upgrade, the slaves are now allowed to house and feed for themselves in an atmosphere of freedom, i.e. the freedom to choose any of the Jesuit-trained conscripts through periodic electoral exercises, and freedom of movement across continents, so that their inherent creativity and industry can be exploited where it exactly is needed.

“None are more hopelessly enslaved than those who falsely believe they are free.” – Johann Wolfgang von Goethe

This novel idea of a “free thinking slave” comes from the Enlightened Ones of the Bavarian Illuminati, which was founded on May 1, 1776, purposely to establish the New World Order, a world order where they are still in full control of through a Pyramid of Cartels, aka Corporatocracy.

The first stage of this counter-reformation, however, only “freed” the White Slaves, but the colored race will not enjoy their illusion of freedom for another century with the Emancipation Proclamation of Abraham Lincoln on January 1, 1863.
It could be said that even the establishment of the United States of America itself was a major part of this Jesuit-hijacked Reformation Movement that was sweeping across the Atlantic, which was established on July 4, 1776, exactly 65 days from the establishment of the Bavarian Illuminati.
While the establishment of the American republic saw the explosion of human creativity, it also was showing its potential of an uncontrollable society in much of the 20th century. Something must be done about it.
So, the Globalists started to transfer their industries to the tamed and more controlled population of the East, to show the Western population how to behave properly amidst a growing economic prosperity. Remember, they can only allow relative prosperity for the mass slaves if only the slaves would allow themselves to be “guided” by them – the self-proclaimed “Enlightened Ones.”
Otherwise, they’ll start retaking your decent, comfortable lives away.
From the great Reformation started in the 1500s, to the New World Order of the late 1600s, to the Vatican/UN-led “all-inclusive” global economy, Agenda 2030, the slaves must continue to work for the Elite, even if current technological realities have superseded labor in all facets of the human existence.
Instead, the Control Maniacs are now moving in for the kill by maximizing the full potential of artificial intelligence, a product of the slave’s creativity, to automate the control of the more sophisticated slaves of the day.
This is now an ongoing system’s upgrade known as Technocratic Dictatorship.

As always, they are still steps ahead of the working class because what has raised the latter’s awareness in the last 3 decades, is also making them apathetic to the fundamental problems of the day. At most, the majority are already satisfied with waging their dissent against the slavery system by merely poking the keyboard.
Unless the ongoing social media revolution is not translated into an actual raising of the pitchforks and torches, the will of the sick minority will always rule the day — the First of May will always be the Day of the Illuminati.
We created these tools of science for the purpose of gifting  freedom to the multitude. We did, while the Elite engaged themselves in worthless club functions, mass orgies, and in their boredom, plan which country they could reduce to rubbles next.
The self-proclaimed “Enlightened Ones” turned out to be the Deluded Ones. Their continued use of aggressive force, blatant lies and deceptions to control populations does not emanate from an enlightened thinking.
We are the saner bunch, always have been. They aren’t.
They might have successfully projected themselves as a powerful organization through the establishment of various groups, think thanks, foundations, financial institutions, but all of these are merely part of the House of Cards that they are hiding themselves from.
Now that the people are beginning to wake up to the mind games that they’ve been playing all along, the entire House of Cards is shaken, just like in the early days of the Reformation. But only a potent action could finish the job and bring the entire control system down, this time around.
Power is never given. It must be taken away from them.
The Slavery System by any other name, i.e. from Monarchy to Corporatocracy, to the current trajectory of Technocracy, must be brought down for good.

4 thoughts on “May 1st: The Day Slavery System Transferred from Monarchies to the Corporations”