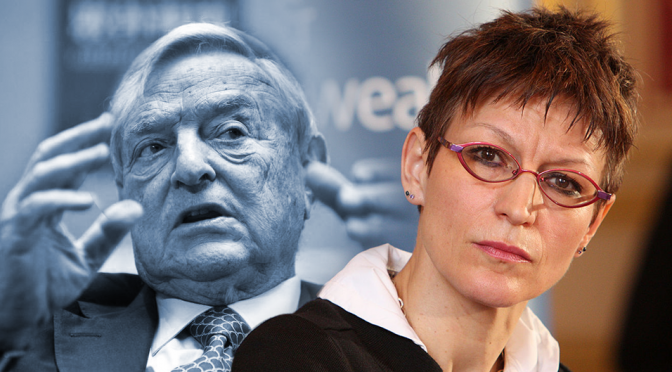 A George Soros asset sneaked past the non-existent anti-Deep State security system of the Duterte government over the weekend, and made a scathing, on location indictment about Duterte’s war on narcopolitics, with full coverage of the media. Her local facilitators were able to organize a forum which provided the stage for Callamard to launch her undiplomatic intervention into Philippine domestic affairs.
It must be remembered that Agnes Callamard was invited by the Duterte government to a public debate with regards to the latter’s war on narcopolitics, so that the real facts and figures of the alleged “extrajudicial killings” could be properly discussed.
Callamard ignored this request, and instead sneaked into the country without prior knowledge of the government, in violation of established UN protocols.

The timing of Callamard’s entry into the country is also of great significance since it happened on the same day that the Philippine delegation delivered the country’s human rights record before a UN periodic review panel in Geneva.

“She conveniently failed to disclose that when the UNHCHR (United Nations High Commission on Human Rights) office in Geneva informed the Philippine Mission there, the Mission asked her to reconsider the trip since Philippine officials would be in Geneva at the same time for the Universal Periodic Review, and were expecting to see her, that being the appropriate venue to meet,” Abella said.
“Her delayed reply came on the day she left for the Philippines. This was neither timely nor proper courtesy accorded to a sovereign nation,” he added.

This dirty tactic is only reflective of the consistent objective of maligning the hardworking president of the Philippines.
To set the record straight the government organized a forum to tell the world about the accurate numbers of all police operations in the last 10 months of the Duterte administration.
https://www.youtube.com/watch?v=sYnnl-ihI8Y
The above numbers are never contested by the local media, but only muted, or deliberately lumped together to blow up the “carnage” that’s going on.
Malice is very evident when one considers the obvious absence of the same level of Western condemnation when it was their puppet BS Aquino was still at the helm.

Agnes Callamard, where were you when these happened? @AgnesCallamard pic.twitter.com/vt9v3PTACP

Agnes S. Callamard is a properly institutionalized henchwoman of the Soros-Rockefeller interventionist infrastructure. For that she is well rewarded with being the “the Special Rapporteur on extrajudicial, summary or arbitrary executions at the Office of the United Nations High Commissioner for Human Rights (OHCHR).
However, her directorship at Columbia University’s Global Freedom of Expression Project, according to her Wikipedia profile should show enough proof about her deep and unbreakable connection to the George Soros’ Open Society Foundations.
Here’s the snapshot of Columbia University’s Global Freedom of Expression sponsors’ page. Click image (and “+” sign thereafter) to enlarge.

Add to that is her formal training at the Tavistock Institute offshoot, New School for Social Research in New York, and a stint at the Amnesty International…

In 1985, Callamard received her undergraduate degree from the Institut d’Etudes Politiques de Grenoble. Callamard has a master’s degree from Howard University in International / African Studies. In 1995, she received a PhD in Political Science from the New School for Social Research in New York.
… From 1998 to 2001, Callamard served as Chef de Cabinet for the Secretary General of Amnesty International, and as the organisation’s Research Policy Coordinator, she led Amnesty’s work on women’s human rights. Callamard has conducted human rights investigations in a large number of countries in Africa, Asia, and the Middle East.

The New School for Social Research in New York, where she got her PhD in political science, is “rooted in a legacy of theoretically informed, historically grounded scholarship. We offer rigorous graduate programs in the social sciences and humanities that go far beyond mainstream thought.”

All Tavistock and American foundation techniques have a single goal—to break down the psychological strength of the individual and render him helpless to oppose the dictators of the World Order. Any technique which helps to break down the family unit, and family inculcated principles of religion, honor, patriotism and sexual behavior, is used by the Tavistock scientists as weapons of crowd control.

These people are trained to use only the “right phrase” to name their agencies and label their actions, i.e. in this case, from forum shopping to “academic visit to the Philippines,” purposely to defeat the need to inform the Duterte government of her intrusion into the domestic affairs of the country.
As expected, she’s not here just to listen and learn about what she persistently calls “extra-judicial killings,” but she did actually stand behind the podium in order to unleash her “beyond the mainstream thought” propaganda.

Being a veteran from a Soros’ Open Society Foundations funded Amnesty International should equipped her with the necessary experience for effecting regime changes around the world, because that’s exactly the purpose of the organization.

Here’s how she celebrated when her beloved unelected EU parliamentarians are retaliating against the Hungarian government that is closing down Soros-funded university and NGOs.

Again, a partial list of Soros-funded NGOs is available at the bottom of the linked page below.

Course of Actions for the Philippines

Aside from showing us the real numbers relating to the war on narcopolitics, the Soros Saboteur Agnes Callamard should never be allowed to return to the country again, unless she agrees to a public debate is the senate where every witness is made to swear to tell the truth, as earlier proposed by the president himself and saboteur has been successfully dodging so far.

Duterte should try to find out, during his upcoming visit to Putin, why Russia and Hungary have banned all Soros-funded institutions in their countries, before the country becomes another Syria, or Libya.
Both Assad and the Qaddafi administrations are highly popular and progressive leaderships falling prey to the Khazarian Mafia’s insatiable hunger for resources and power.

The bottomline is pretty simple: Philippine President Rodrigo R. Duterte has a proven track record of effectively dealing with criminals, removing corrupt government officials in real time, and uplifting the economic condition of a sizable City of Davao. He’s doing exactly that in a much larger scale nationwide,

… while those who are criticizing and telling him what to do, have not had a clear record of improving the lives aside of their own. Not to mention their proven links to the criminal underworld.

I don't know under which rock you live in, but there is extensive documentation linkin… https://t.co/u8xj7alJ6A pic.twitter.com/2QSnbd52C5

@AgnesCallamard When was the last time you underwent an extensive drug-test? Bet you failed but worked your magic! No wonder you coddle pushers! @UN @hrw pic.twitter.com/OVqz3pxid8

@AgnesCallamard 2. You have no right 2 engage in partisan political activities. That activity is partisan: it's about discrediting gov't policy. pic.twitter.com/4RzEUcDT7E

Here are the self-righteous traitors to the republic, and with direct links to the drug queen ex-justice secretary, now posing as senator Leila Delima…