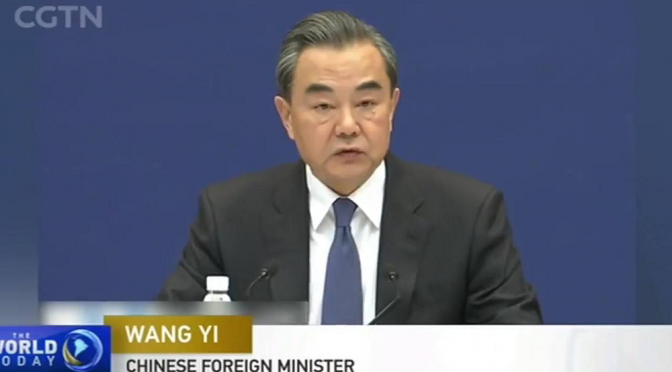 The world summit, “The Belt and Road Forum for International Cooperation,” hosted by China, is now less than a week off. Chinese Foreign Minister Wang Yi yesterday gave a preview to the international media, on the attendance, agenda and key concepts of the May 14-15 event in Beijing.
Among the 110 nations participating, 28 will send their heads of state; the leaders of the United Nations and 59 other organizations will be there. Wang said–referring to Russia, Central Asia and China–that, what was once a “blueprint, is now a roadmap,” for this region. One day soon, this description should apply to the whole world, as the Schiller Institute’s World Land-Bridge has promoted for decades.
Conspicuously absent from this picture, are the United States, and other hold-outs centered in the North Atlantic. This reflects continued domination by the thinking, lies and dirty operations of the dead British Empire. But it needn’t be for long.
Later this week, a special half-hour video feature will be released on the powerful New York April 13-14 conference, titled, “U.S.-China Cooperation on the Belt & Road Initiative” (co-sponsored by the Schiller Institute.) The video will be ready-made for translation, for the widest possible circulation and impact, in the fastest possible time.
Meantime, the British Empire “element” is ever more exposed and vulnerable. The latest scandal to come out, concerns how the three top British intelligence agencies had German Chancellor Angel Merkel come to them secretly in England, at least twice, to receive a private briefing on what is reported as terror threats against Germany, unbeknownst to her own intelligence services. They were kept umaware. The story was broken a few days ago by Focus, the second-largest weekly in Germany, whose sources (names withheld) in German security services, are enraged. They raise the question of treason. Merkel never attended meetings with her own security agencies. “Why then, is she travelling to England–doesn’t she trust her own people anymore?”
Merkel’s last such secret meeting took place in Chequers, at the country estate of then-Prime Minister David Cameron, in October 2015. The heads of MI5 and MI6 were present, as was Robert Hannigan, head of GCHQ. This is the same time frame, as the already-exposed GCHQ surveillance of Trump and associates for alleged “Russian” connections. (Hannigan suddenly resigned in January, 2017, as the heat flared up on Trump surveillance). This is the ubiquitous British hand–spying, blackmail, lying, controlling.
No mere “domestic” scandals, the danger of these British operations being allowed to continue, is the threat of provoking strife and warfare on the model of “East vs. West” confrontations, such as NATO vs. Russia, or the USA/South Korea vs. North Korea, which can result in annihilation by nuclear war. Already, the toll of suffering and death from years of this confrontation policy –often going by the name of “responsibility to protect,” or “show of force,” is horrible.
The significance of the Belt and Road summit in May, is that it stands as a marker of a new paradigm, putting an end to the era of destruction. Chinese Minister Wang said the forum will be the highest level international meeting since Pres. Xi Jinping first announced the New Silk Road in late 2013. Wang spoke of its importance for betterment of global governance, and for bringing about justice for all.