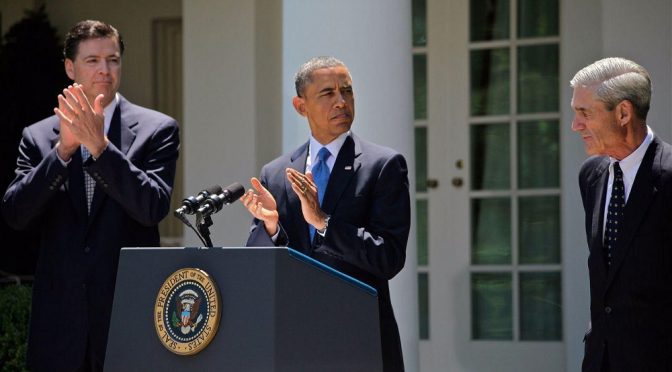 Donald Trump, in the past hours, took initial steps towards throwing out the garbage in the intelligence community who have been part of the ongoing Color Revolution attempt against the U.S. government.
by  LarouchePAC
Comey, together with former NSA chief Clapper, former CIA chief Brennan, and others, have openly participated in a coup attempt against President Trump, using wild lies and tactics last seen in the McCarthy era to terrorize the American population about the supposed danger of Russian aggression, and even Russian control over the U.S. government.
Russian Foreign Minister Sergei Lavrov, following a highly productive meeting today with President Trump and Secretary Tillerson in the White House, usefully ridiculed this campaign. Responding to repeated questions from the whorish U.S. press to explain the fake news of Russian interference in the 2016 election, Lavrov responded:

“I think this is even humiliating for American people, to hear that U.S. internal affairs are being governed by Russia. How can it be that such a great nation is thinking in this way?”

EIR published an extensive dossier on Feb. 27, 2017, titled: “Obama and Soros — Nazis in Ukraine 2014, U.S. in 2017?” (PDF) The dossier documented that the same people and institutions which ran the neo-nazi coup against Ukraine in 2014 were attempting to carry out a similar Color Revolution against Trump — and for exactly same reason. As Russian Deputy Ambassador to the UN Security Council Vladimir Safronkov said to British Ambassador Rycroft on April 13:

“Your dream has slipped away, because we’re going to work with the United States. You’re afraid of this. You’re doing everything you can to sabotage this teamwork.”

The Russians understand that the British Empire is pulling out all the stops, even risking a nuclear war, to prevent Trump from leading the U.S. into a partnership with America’s historic and natural friends in Russia and China. This friendship would mean the end of the British Empire once and for all, ending the division of East and West, and bringing into being a new paradigm based on development and the mutual interests of all nations.
This is, of course, the New Silk Road — the One Belt One Road Initiative launched by China’s Xi Jinping, which will hold its first international conference in Bejing this coming weekend, with representatives from over 100 countries and 28 heads of state, planning a productive future for mankind and an end to the perpetual warfare of the imperial era.
Helga Zepp-LaRouche, known as the “Silk Road Lady” in China, today reflected on the fact that, with Italian Prime Minister Gentiloni heading his nation’s delegation to the Belt and Road Forum, while former Prime Minister Jean-Pierre Raffarin will represent France, and most other nations in Europe sending significant delegations, the historical momentum in Europe has shifted to the bright future of the New Silk Road.
Only Germany under Merkel seems to be stuck in the old paradigm, ranting about carbon rather than nation building. As yet, President Trump has not indicated whether he or any other U.S. delegation will attend, although China’s President and the Chinese Ambassador to the U.S. have renewed their invitation.
But Trump has unquestionably made the decision to reject the British gameplan, to dump the corrupt intelligence networks which have peddled the anti-Russia, pro-war propaganda on behalf of British intelligence, which has played the US as the “dumb giant” fighting its colonial wars, while preparing for nuclear war against China and Russia.
In Asia, the newly elected President Moon Jae-in was sworn in this morning, and immediately announced his commitment to restoring the “Sunshine Policy” toward North Korea, and to work with Trump toward a long-term solution on the Korean peninsula. Such a solution must be based on mutual development and assurances of sovereignty for the North in exchange for resolving the nuclear weapons issue.
Pyongyang has repeatedly stated that if the threats to their nation were permanently ended, a solution could be found. There is now the potential that the divided Korean nation, working with Xi, Putin, and Trump, and possibly Japan’s Shinzo Abe (who is close to both Putin and Trump), can begin the peace and development process which could eventually lead to reunification.
It’s time for President Trump to have that hamburger with Kim Jong-un.

We’ve seen this scenario before, when we separate Obama’s action from that of the warmongering chickenhawks. Will Trump respond positively to the call of the day, and put the Empire at bay?