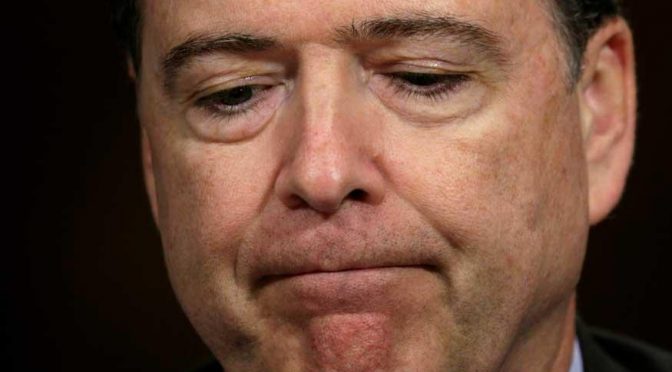 Official Washington is abuzz, comparing President Trump’s ouster of FBI Director Comey to President Nixon’s Watergate cover-up, but there is a darker “deep state” interpretation of these events, says Robert Parry.
By Robert Parry
President Trump’s firing of FBI Director James Comey on Tuesday reflected a growing concern inside the White House that the long-rumored scheme by “deep state” operatives to overturn the results of the 2016 election may have been more than just rumors.

The fear grew that Comey and other senior officials in the U.S. intelligence community had concluded last year that neither Hillary Clinton nor Donald Trump was a suitable future president, albeit for different reasons. I’m told that Clinton was seen as dangerously hawkish and Trump as dangerously unqualified, opinions privately shared by then-President Barack Obama.
So, according to this account, plans were made last summer to damage both Clinton and Trump, with the hope of putting a more stable and less risky person in the Oval Office – with key roles in this scheme played by Comey, CIA Director John Brennan and Director of National Intelligence James Clapper.
When I first heard about this supposed cabal in the middle of last year, I dismissed it as something more fitting a Jason Bourne movie than the real world. But – to my amazement – the U.S. intelligence community then began intervening in the presidential campaign in unprecedented ways.
On July 5, 2016, Director Comey dealt a severe blow to Clinton by holding a press conference to denounce her use of a private email server while Secretary of State as “extremely careless,” yet he announced that no legal action would follow, opening her to a damaging line of attack that she jeopardized national security but that her political status gave her special protection.
Then, on Oct. 28, just ten days before the election, Comey reopened the investigation because of emails found on the laptop of disgraced former Rep. Anthony Weiner, the husband of Clinton’s close aide Huma Abedin. That move re-injected Clinton’s email controversy into the campaign, along with the unsavory issues surrounding Weiner’s sexting scandal, and reminded voters about the sex-related scandals that have swirled around Bill Clinton for years.
To make matters worse, Comey closed the investigation again just two days before the election, once more putting the Clinton email controversy in front of voters. That also reaffirmed the idea that Clinton got special treatment because of her political clout, arguably the most damaging image possible in an election year dominated by voter anger at “elites.”
Clinton herself has said that if the election had been held on Oct. 27 – the day before Comey reopened the email inquiry – she would have won. In other words, whether Comey’s actions were simply clumsy or possibly calculated, the reality is that he had an outsized hand in drowning  Clinton’s candidacy, a point that Trump’s Justice Department also noted on Tuesday in justifying Comey’s firing.
Russia-gate Probe
And, we now know that Comey was leading a parallel investigation into possible Russian collusion with the Trump campaign, instigated at least in part by a dossier prepared by ex-British spy Christopher Steele, paid for by Clinton supporters and containing allegations about secret meetings between Trump aides and influential Russians.

Last July, the FBI reportedly secured a Foreign Intelligence Surveillance Act warrant against former Trump foreign policy adviser Carter Page. Page was mentioned in the Steele dossier and gave an academic speech in Moscow on July 7 mildly critical of U.S. policies toward Russia and other nations of the former Soviet Union, two apparent factors in justifying the FISA warrant.
Before the election, people close to Clinton also tried to get the U.S. media to publicize the Steele dossier and particularly its anonymous claims about Trump cavorting with prostitutes in a Moscow hotel while Russian intelligence agents supposedly filmed him. However, because media outlets could not confirm Steele’s allegations and because some details turned out to be wrong, the dossier remained mostly under wraps prior to the election.
However, after Trump’s surprising victory on Nov. 8, President Obama and his intelligence chiefs escalated their efforts to undermine Trump’s legitimacy. The Obama administration leaked an intelligence assessment that Russian President Vladimir Putin had orchestrated the hacking of Democratic emails and their publication by WikiLeaks to undermine Clinton and help Trump.
The intelligence community’s assessment set the stage for what could have been a revolt by the Electoral College in which enough Trump delegates might have refused to vote for him to send the election into the House of Representatives, where the states would choose the President from one of the top three vote-getters in the Electoral College.
The third-place finisher turned out to be former Secretary of State Colin Powell who got three votes from Clinton delegates in Washington State. The idea of giving votes to Powell was that he might be an acceptable alternative to House members over either Clinton or Trump, a position that I’m told Obama’s intelligence chiefs shared. But the Electoral College ploy failed when Trump’s delegates proved overwhelmingly faithful to the GOP candidate on Dec. 19.
Expanding Russia-gate
Still, the effort to undermine Trump did not stop. President Obama reportedly authorized an extraordinary scheme to spread information about Russia’s purported assistance to Trump across the federal bureaucracy and even overseas.

Comey, Brennan and Clapper also set in motion a hasty intelligence assessment by hand-picked analysts at the CIA, the FBI and the National Security Agency, producing a report on alleged Russian electoral interference that was released on Jan. 6.
Though Clapper had promised to release a great deal of the evidence, the declassified version of the report amounted mostly to “trust us” along with a one-sided analysis of Putin’s alleged motive, citing his well-known disdain for Clinton.
But the report failed to note the other side of that coin, that Putin would be taking a great risk by trying to hurt Clinton and failing, given Clinton’s odds as the prohibitive favorite to defeat Trump. Putin would have to assume that the NSA with its powerful surveillance capabilities would pick up a Russian initiative and inform an irate President Hillary Clinton.
In other words, the Jan. 6 report was not some careful analysis of the pros and cons for believing or doubting that Russia was behind the WikiLeaks disclosures. It amounted to a prosecutor’s brief, albeit without any public evidence to support the Russia-did-it charge.
We learned later that the report’s classified appendix included a summary of Steele’s dossier that was then briefed to President Obama, President-elect Trump and to members of Congress, guaranteeing that its damaging but unproven allegations would finally get widely circulated in the mainstream media, as indeed promptly happened.
Hobbling Trump’s Presidency
So, going into the Inauguration, Russia-gate was dominating the front pages of newspapers as well as the endless chat shows on cable TV despite the fact that no real evidence was presented proving Russia was responsible for the WikiLeaks’ posts – and WikiLeaks denied getting the material from Russia. There was also no evidence that Trump’s campaign had colluded with the Russians in this endeavor.

But those suspicions quickly hardened into a groupthink among many Democrats, liberals and progressives. Their hatred of Trump and their dread about his policies convinced some that the ends of removing Trump justified whatever means were employed, even if those means had more than a whiff of McCarthyism.
On Inauguration Day, many anti-Trump protesters carried signs accusing Trump of being Putin’s boy. Sensing a political opportunity, congressional Democrats joined the #Resistance and escalated their demands for a sweeping investigation of any connections between Trump’s team and Russia. Their clear hope was something might turn up that could be exploited in an impeachment proceeding.
As the principal intelligence holdover from the Obama administration, Comey assumed an essential role in this operation. It would be up to the FBI to secure the financial records from Trump and his associates that could provide a foundation for at least suspicions of a sinister relationship between them and Russia.
Trump may have thought that he bought some political space by complying with political pressure to fire National Security Adviser Michael Flynn on Feb. 13 over what exactly was said in a pre-Inauguration phone conversation between Flynn and the Russian Ambassador. Trump also got the Russia-gate pressure to lessen when, on April 6, he fired 59 Tomahawk missiles at Syria over an alleged chemical attack. But he soon came to realize that those respites from Russia-gate were brief and that an incipient constitutional coup might be underway with him as the target.
However, if those coup suspicions have any truth – and I realize many Americans do not want to accept the notion that their country has a “deep state” – firing Comey may fuel Trump’s troubles rather than end them.
Trump clearly is unpopular not only among Democrats but many Republicans who see him as an unprincipled interloper with a nasty Twitter finger. The Comey firing is sure to spark new demands for a special prosecutor or at least more aggressive investigations by Congress and the press.
Watergate Comparisons
Although Democrats had condemned Comey for his interference in the Clinton campaign, they now are rallying to Comey’s side because they viewed him as a key instrument for removing Trump from office. After Comey’s firing, from The New York Times to CNN, the mainstream media was filled with comparisons to Richard Nixon’s Watergate cover-up.

One of the few voices commending Trump for his action, not surprisingly, came from Carter Page, who briefly served as a Trump foreign policy adviser and has found himself in the crosshairs of a high-powered counterintelligence investigation as a result.
“It is encouraging that further steps toward restoring justice in America have been taken with the termination and removal from office of FBI Director James Comey,” Page said in a statement.
“Although I have never met President Trump, his strength and judgment in holding senior officials accountable for wrongdoing stands in stark contrast to last year when ordinary private citizens outside of Washington like myself were targeted for exercising their Constitutional rights.
“Under James Comey’s leadership in 2016, I was allegedly the subject of an intensive domestic political intelligence operation instigated by the FBI and based on completely false allegations in a FISA warrant application.”
Yet, despite what Page and other Trump advisers caught up in the Russia-gate probe may hope, the prospects that Comey’s firing will end their ordeal are dim. The near certainty is that whatever Obama and his intelligence chiefs set in motion last year is just beginning.
Investigative reporter Robert Parry broke many of the Iran-Contra stories for The Associated Press and Newsweek in the 1980s.