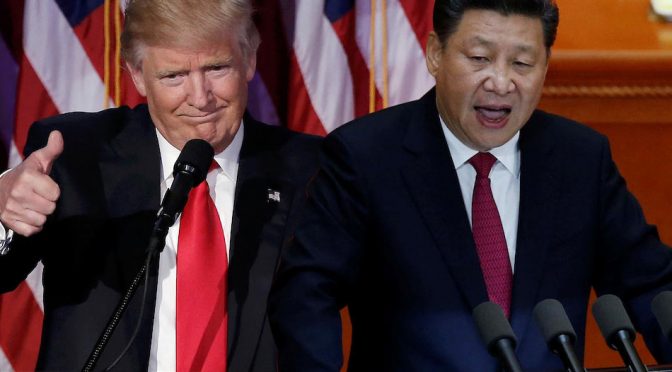 No matter what the Western mainstream media are saying, China’s Belt and Road Initiative are threatening the Western hegemony that is founded on unpayable debt and war proliferation. Not to be left out, the Trump government covertly opposed its own rhetoric and has sealed a number of agreements with its Chinese counterparts.

This is unprecedented, considering that years ago, it was the United States under Obama which pressured other G7 member states not to join the Asian Infrastructure Investment Bank, one of three development banks organized to finance the planned infrastructure projects collectively called the New Silk Road.
China aims at raising the economic conditions of all countries traversed by the Belt & Road Land-Bridge in order to give them the capability to understand how power is being misused by the other side of geopolitical spectrum.

The Rothschild financial media are still calling it a “distant dream.” But every project that China has undertaken is always big.

The extremely ambitious Chinese project known as One Belt, One Road is becoming a reality with every passing day. As you must know, the project is designed to create a web of transport routes all across Eurasia to allow faster transfer of people, goods and resources. Despite the fact that the project is described as an “economic belt”, it would be more accurately described by the term “network”, since there is not a single route connecting Europe and Asia that it would leave unimproved. One Belt, One Road is going to transform all the main trade routes of the Eurasian continent. But it doesn’t stop just there since the vast African continent is also going to enjoy the benefits of this vast network.

Moreover, China is wise enough to realize that one of the ways it can neutralized the number of imperial military bases encircling it is to bring as many counties into its own geopolitical orbit and its non-aggressive Oriental culture.

To retard this initiative, six of the G7 countries refused to attend the summit. But in the last few days, scores of economic agreements were arrived at between the Trump government and China:

“China has released the first round of achievements under the China-US Economic Cooperation 100-Day Plan. The achievements cover a wide range of areas, including trade, financial services and use of energy. The 100-Day Plan aims to pump new momentum into the existing economic cooperation between Beijing and Washington. CGTN’s Wang Fan has more.”

In order to offset the trade imbalance between the two countries, the US will supply beef and natural gas to China, while the latter can unload its surplus steel production for the massive reconstruction of its “Third World infrastructure.”

The British Empire has been doing its best to prevent a closer Trump-Xi and Trump-Putin collaborations by unleashing the “Assad chemical attack” false flag using its own organized White Helmets false humanitarian operatives serving only in areas controlled by Al-Nusra militants.
This subsequently resulted to Trump’s dropping of 59 Tomahawks with a 2-hour window for the Russians to move their military installations and forces away from the target airfield.
On top of that, the White House sneaked through a Trump-Lavrov meeting which has left the mainstream media in utter disgust recently, i.e. the “Russians are here, “has conquered the White House,” or now the “White House is bugged.”
This was after the FBI director was ousted for not having addressed the Deep Swamp properly.

But the deal has been sealed with Russia and China in a big way.

Now, the US has announced it is attending the summit:

“With a little over 24 hours until the opening of the Belt and Road Initiative forum in Beijing, the United States has officially announced that in fact a delegation will be attending, representing the US and the Trump Administration. Our webcast features numerous exciting and fast-moving developments as the world is transformed by this vision of win-win cooperation and peace through development which the British imperialists have tried so desperately to derail, including with the attempted political coup ongoing against the Trump Administration.”

Of course, the East will never assume that it’s all sweet and rosy from here on. There will surely be some bumps along the way. But our shared experience in the last four years since its announcement proves that it’s the only viable way to supplant the geopolitical ambitions of the few.
Again, it may not be the perfect alternative that we wanted, but it will force the economic rise of many, as it has done in China itself, i.e. where more than 800 million have been uplifted from poverty.
China knows it’s the only way the corrosive mindset could be overcome, i.e. how can one tackle the high profile global issues when the priority is to survive a given day?
We cannot implement the resource-based economic concept when the Western Oligarchy is already laying the groundwork on how to exploit a cashless society.
The Chinese-led Eurasian Land-Bridge, dubbed as “One Belt, One Road” economic development may be the transition that we all need, and the opportunity when we can destroy the monopolies and set the dark forces at bay.

3 thoughts on “US Delegation is attending Historic, Pivotal Belt and Road Summit”