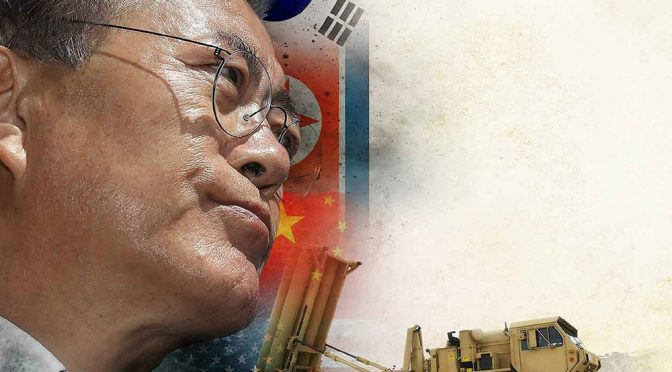 In order to end the tension in the Korean Peninsula, the ruling Democratic Party of Moon Jae-in is scrapping the THAAD installation, which was rammed into the country during the last days of the US puppet regime of Park Geun-hye.

By Li Xiang (CNTV)    14:46, May 17, 2017
South Korea’s ruling Democratic Party has put forward the possibility of returning the controversial THAAD anti-missile system to the United States.
National Assembly member Woo Won-shik said in a radio interview that the deployment of THAAD required parliamentary approval. He added that if there were any legal issues related to its deployment, the Democratic Party would recommend returning the system to the US.
In July 2016, Washington and Seoul agreed to deploy THAAD in South Korea, with the procedure beginning in March of 2017. Several neighboring nations have been strongly opposed to its deployment, including China and Russia.

It has become clear that in order for Trump to last through his 4-year term, he must feed the military industrial complex, from time to time.
It is in this context that the Trump government is cozying up with Saudi Arabia, which has a standing lawsuit related to WTC 911 controlled demolition, while at the same time, threatening a renegotiation of nuclear pact with Iran.

Meanwhile, NATO is in a great quandary considering the latest Trump hosting of Evil Russians in the White House. The “Russians are Evil” narrative is necessary to justify its own existence.

All contacts with #US leader important but some details not for comment — #Kremlinhttps://t.co/ypbWTSPhzl pic.twitter.com/g4y0cdE8N3

Rogue Trump must be impeached for the Deep State hierarchy to sleep properly at night.
In the midst of all the political circus, who exactly is looking after the interest of the “ordinary citizens” of the West?