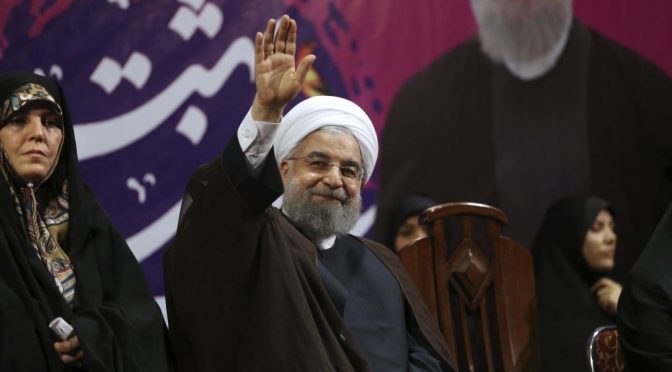 Iranian President Rouhani won a resounding reelection victory on Saturday with 23,549,616 votes or 57 percent of the total ballots. His nearest rival in the four-man race, Seyyed Ebrahim Raeisi, secured 15,786,449 votes, or 38.5 percent.
Iran’s 12th presidential election and the 5th City and Village Councils Elections were held simultaneously on Friday at some 63,500 polling stations inside the country and 310 others in 102 countries.

—
The Iranian Interior Ministry has declared a first series of partial results from the Friday presidential election, putting Hassan Rouhani in the lead with 22,796,468 votes so far. Out of the 40,076,729 votes cast, 38,914,470 ballots were declared valid.
The candidate with the second largest number of votes was Seyyed Ebrahim Raeisi, who garnered 15,452,194 votes, according to the Interior Ministry.
Mostafa Aqa-Mirsalim and Mostafa Hashemi-Taba, the other two candidates, so far received 455,211 and 210,597 votes respectively. 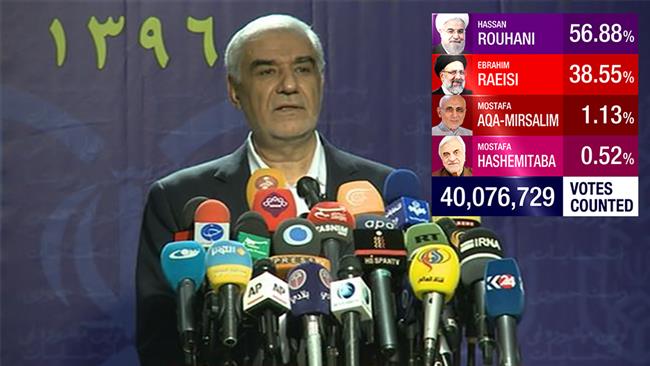 Rouhani has thus gained 56.88 percent of the votes so far, compared to 38.55 percent for Raeisi. Aqa-Mirsalim and Hashemi-Taba have so far secured 1.13 and 0.52 percent of the votes, respectively.
Ali Asghar Ahmadi, the head of the Election Committee of Iran’s Interior Ministry, who announced the almost final results, also said that Iranian Interior Minister Abdolreza Rahmani Fazli would announce the final results of the election at 2:00 p.m. Iran time (0930 GMT) on Saturday.
Iran’s 12th presidential election was held on Friday. Elections were also simultaneously held for City and Village Councils.
Voting hours were extended several times due to a high turnout in the polls.
Six candidates had been vetted and approved by the Guardian Council to run in the election. In the final days of campaigning, however, two of the candidates, namely First Vice President Es’haq Jahangiri and Tehran Mayor Mohammad Baqer Qalibaf, withdrew from the race in favor of President Rouhani and Raeisi, respectively.

This means that there won’t be any major disruption to the trilateral efforts towards a peaceful resolution in the Syrian conflict.