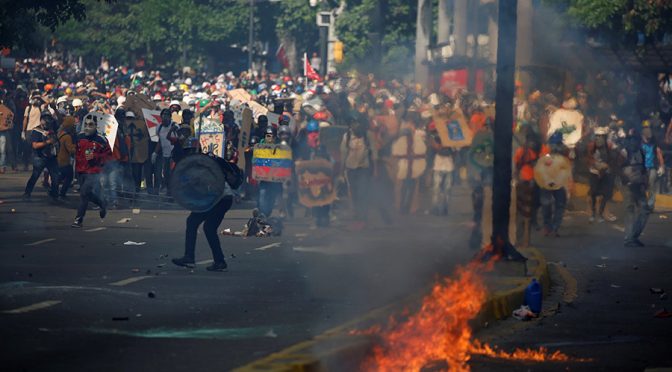 The Western Deep State wants to introduce “democracy” in Venezuela through political sanctions, financial system hacking, and religious war due to the country’s refusal to surrender control of its vast energy resources to the Wall Street bankers.
These multi-pronged Deep State attacks on Venezuela has been very persistent in the last decade.
As always, the Western media continue to be a critical tool in demonizing Latin American leaders who continue to exercise Bolivarian principles of defiance.

The allegations against Venezuela’s vice-president could not have been more serious. Announcing sanctions against Tareck El Aissami this week, the US Treasury Department described him as a “prominent drug trafficker” who had overseen and even partially owned narcotics shipments from Venezuela to the US.
As governor of Aragua state and minister of the interior, he allegedly oversaw or partially owned drug shipments of more than one tonne from Venezuela, and dealt directly with Mexico’s Zetas cartel and Colombian narco-boss Daniel El Loco Barrera. In January he was promoted to vice-president.
But as bad as that sounds, El Aissami is only the latest – if the most highly placed – in a long list of Venezuelan officials or people close to power who have been tied to drug trafficking.

The consequence of what the media is trying to say is that the people of Venezuela are immature to put in power these druglords and charlatans, and the West is morally right to introduce another Libya-like democracy into the region.

What lies behind the attacks on Venezuela?

April 10, 2017 03:23 by ThePrisma
The destabilizing plan being pursued is not new. Why is there this insistence on thwarting the Bolivarian Revolution? The Venezuelan Foreign Minister has said that “never before in the history of international organizations have we seen unlawful, deviant, arbitrary, biased behaviour.”
Caracas (PL) Venezuela was victorious once again in the Organization of American States (OAS) after it managed to thwart the interventionist and meddling efforts driven by its Secretary General, Luis Almagro.
Bolivarian diplomacy successfully dealt with the plans of a powerful alliance led by the United States Department of State and supported by some right-wing governments in the region, with dignity and integrity. For this, Almagro acted as the right hand of the alliance by aligning himself with the most reactionary groups in the country.
The destabilizing plan being pursued against Venezuela is not new. In June of last year, the head of the so-called “ministry of colonies” – as Cuba’s Eminent Foreign Minister, Raúl Roa García,  described the OAS – tried to unsuccessfully activate the Inter-American Democratic Charter, as an instrument of coercion and blackmail, against the Bolivarian government.

On March 14, Almagro presented a report on Venezuela funded by the so-named  International Crisis Group NGO which is supported by US oil company Exxon Mobil; and is sponsored by the American Petroleum Institute which has clear interests in Venezuelan energy resources.
This same step had been taken a year earlier, in June 2016, and the results were the same: it did not work despite Washington’s political backing. But some wonder why there is this insistence in thwarting the Bolivarian Revolution in Venezuela.
According to reports issued by the powers that be in Caracas, the secretary general of the OAS maintains close ties with the most reactionary factions of Venezuela’s extreme right, and between 2016 and 2017 met 26 times with representatives of these opposition groups.
It is striking that more than 70% of his messages on Twitter”s social network are aimed at attacking Venezuela, its government and its officials.
Undoubtedly, Almagro took sides with the right-wing groups that are fighting for power against the government presided over by Nicolás Maduro, despite the latter’s victory at the ballot box and the fact that these groups are not inclined towards dialogue as a means of reaching national agreements .
Hence Almagro’s continual “reports”, which were described by the Venezuelan Minister for Foreign Affairs, Delcy Rodríguez, as “a complex strategy of intervention in the medium and short term.”

Why is he insisting on the Democratic Charter?

The Inter-American Democratic Charter, adopted on September 11, 2001, in a special session of the OAS Assembly, held in Lima, Peru, is a mechanism that would be applied in case of a rupture in the democratic institutional political process or the legitimate exercise of power by an elected government, in any of the member states of the organization.
By triggering this, a temporary suspension of the right to participate of an OAS member state can be approved, although to realise this a two thirds majority vote is required.
Exclusion from this inter-American regional process limits the sanctioned government’s ability to take action and it would also be isolated and sanctioned internationally.
Application of the Inter-American Democratic Charter to Venezuela – according to the above thinking and as part of the plan orchestrated by Almagro – could have consequences for other regional organizations, such as the Bolivarian Alliance for the Peoples of America, the Community of Latin American and Caribbean States, The Union of South American Nations, Petrocaribe, among others – which promote social integration in the region.
Obviously, that was the task entrusted to Almagro by the US State Department, which, if carried out, could lead to a dangerous destabilization of Latin America comparable with what has already been experienced in the Middle East and in some areas of Eastern Europe.

In a recent press conference, the Venezuelan Foreign Minister stated that “never before in the history of international organizations have we seen unlawful, deviant, arbitrary, biased behaviour. The behaviour shown towards Venezuela really has been unprecedented and unusual, marked by attacks which articulate a plan of intervention. ”
For Rodríguez, with its new interventionist attitude, “the OAS is returning to the darkest pages in its history,” with a shameful record of silence in the face of coup d’états, systematic violations of human rights and fundamental freedoms; and always at the service of the oligarchies and the most reactionary power groups.
The high ranking official explained that the plans that were being plotted against Bolívar’s homeland “via vile blackmail, pressure and extortion” by Washington were known about.
He added that two US congressmen threatened “in a crude, vulgar and brutal way member states of the organisation, sister states that remained standing with their heads held high, their morals to the fore, defending the dignity and also the sovereignty and independence of the Great Homeland.” (PL) *Journalist in Venezuela
(Translated by Nigel Conibear – DipTrans IoLET MCIL – [email protected])

Late last year, the banking system of Venezuela was sabotaged when its electronic payment system collapsed. 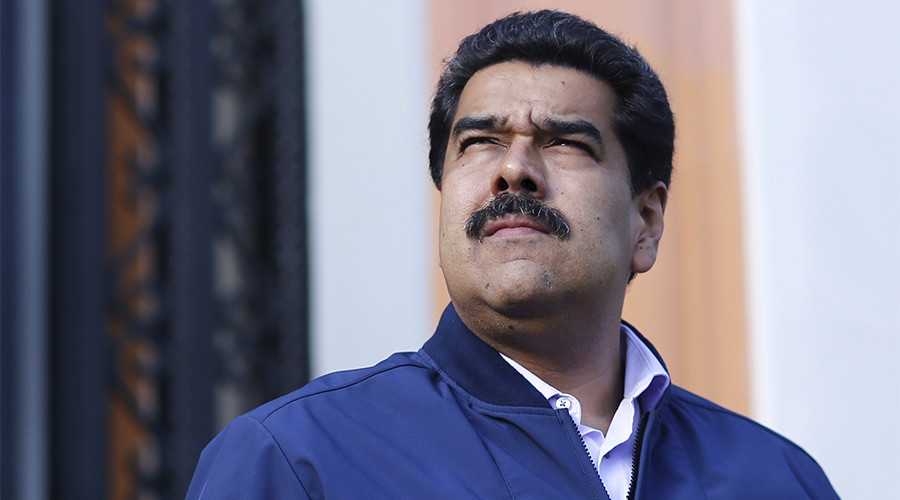 President Maduro branded the attack an act of international aggression against Venezuela, orchestrated to hurt the people in the country.
Venezuelan President Nicolas Maduro announced Saturday the arrest of those responsible for the banking system sabotage that saw the nation’s electronic payments system collapse in the country on Friday.
Five employees from Credicar, a company in charge of credit and debit card operations in the country, were arrested Friday night. “It was a deliberate action what happened in Credicar, it’s confirmed, and those responsible have been detained,” said Maduro.

While this formula of hybrid geopolitical interventions is familiar to all of the advanced readers of this site, most of the people in the Americas have yet to understand the hidden agenda which motivated the leaders behind the mass actions, which complements the power of Western propaganda which fueled color revolutions in many parts of the world, and within the United States, too.

As typical in any religious countries, Vatican embedded agents has also tried to do their part in instigating rift right at the core of the Venezuelan society. The Catholic priests unleashed their anti-Maduro propaganda to solicit an aggressive response from his die hard supporters.

Collectives are pro-government groups that organize community events and social projects, but they also have been accused of intimidation and violence against those who oppose the government.
“They started to shout insults, then would be calm, and then they would shout again,” said Maria Cisneros, who has attended the church for 20 years. She requested her name be changed for this story out of fear of retaliation.
“These were aggressive people, with aggressive vocabulary, using profanity, and they said all kinds of vulgarities; we felt very attacked,” she said.

The Deep State is also insulated from a possible coordinated retaliation of its sanctions against targeted country because it is only the people of US that will suffer from it, and not the Deep State crowd themselves.

‘Get your dirty hands out of Venezuela’ – Maduro to Trump

Published time: 20 May, 2017 17:23
The United States should “get out of Venezuela,” the country’s leader, Nicolas Maduro, said after Washington slapped Venezuelan top judiciary officials with sanctions to “support” the Venezuelan people.
The new sanctions package, targeting the chief judge and seven other members of Venezuela’s Supreme Court, was imposed by the US Treasury to “advance democratic governance” in the country.
“Enough meddling … Go home, Donald Trump. Get out of Venezuela,” Maduro said in a speech broadcasted live on TV, as cited by Reuters. “Get your dirty hands out of here.”
The Venezuelan president’s tirade echoed a statement issued by the government, accusing the US of intervening into country’s internal affairs and seeking to further destabilize it.
“President Trump’s aggressions against the Venezuelan people, its government and its institutions have surpassed all limits,” the statement said.
It urged the US to focus on sorting out its own internal problems, instead of meddling in Venezuela’s affairs.
“The extreme positions of a government just starting off only confirmed the discriminatory, racist, xenophobic, and genocidal nature of US elites against humanity and its own people, which has now been heightened by this new administration which asserts white Anglo-Saxon supremacy,” the statement read, as cited by Reuters.
The sanctions imposed by the US Treasury include freeze of any assets the eight judges might have in the US, deny them entering the country, and prohibit US citizens to do any business with them. The situation in Venezuela “is a disgrace to humanity” and the country “has been unbelievably poorly run,” Donald Trump said Thursday.
“We haven’t really seen a problem like that, I would say, in decades,” Trump added.
Thousands of anti-government protesters hit the streets Saturday with large crowds marching down the streets of the capital, Caracas, and the city of Christobal in the western Tachira state, which has grown into one of the main centers of the ongoing unrest.

In light of the worsening food shortage in Venezuela, Putin decided to send 60 thousand tons of wheat each month to the struggling South American country.

One by one, these Latin American countries, e.g. Brazil and Argentina, succumbed to the will of the Deep State due in part to the ignorance of the middle class to the above methods that are being used in the region.
At present, only a combined Russia and China intervention might deter a complete Deep State usurpation of Latin America, unless some form of miracle will one day wake up the American “Patriots” to rise up in arms against the latter.