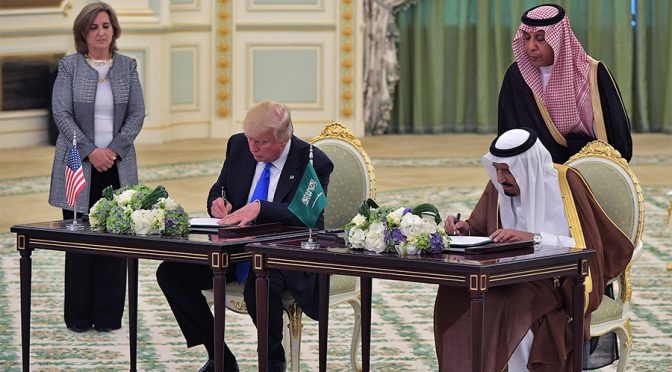 Trump’s Raytheon stocks are soaring again. More than a billion dollar worth of Raytheon made munitions are estimated to be part of the package, i.e. a $350 billion worth of deaths and destruction have been sealed between the US and the House of Saud today, $110 billion of which is due for delivery as soon as possible.

20 May, 2017 14:53
In his first overseas trip as president, Donald Trump sealed an arms deal with Saudi Arabia worth $350 billion over 10 years, with nearly $110 billion to take effect immediately. The agreement is said to bolster security “in the face of Iranian threats.”
“This package of defense equipment and services support the long-term security of Saudi Arabia and the Gulf region in the face of Iranian threats, while also bolstering the Kingdom’s ability to contribute to counter terrorism operations across the region,” the White House said in a statement on Saturday, as quoted by CNBC News.
US President Donald Trump, along with US Secretary of State Rex Tillerson who is accompanying him on the trip, will attend the signing of a memorandum of intent on the package, Reuters reports, citing a White House official.
… The arms package includes a Terminal High Altitude Area Defense (THAAD) missile defense system from Lockheed Martin, …a software system, a package of satellite capabilities, as well as fighting and artillery vehicles are also reportedly part of the negotiations. More than $1 billion worth of munitions, including armor-piercing Penetrator Warheads and Paveway laser-guided bombs made by Raytheon, might also be included in the package.

Of course, there’s no Iranian threat. It was the CIA which deposed Mohammad Mosaddegh for nationalizing the Iranian oil industry decades ago.
Trump is also expecting that the Deep State crowd will shut up for a week, or two, as the deal “supports tens of thousands of new jobs in the US defense industrial base” which really means huge profits for the war manufacturers.
Meanwhile, the bleeding hearts of the EU Parliament is so silent about the ongoing genocide in Yemen.

25 Apr, 2017 18:26
The UN has appealed for $2.1 billion to prevent the “starving of an entire generation” in Yemen. But it says a lack of funds is not the only issue of concern in the war-torn country, amid reports that the strategic port of Hodeidah may be targeted by the Saudi-led coalition.
UN Secretary-General Antonio Guterres appealed for the multi-million aid package for Yemen on Tuesday during the opening session of a donor conference in Geneva.
“On average, a child under the age of five dies of preventable causes in Yemen every 10 minutes,” Guterres said. “This means 50 children in Yemen will die during today’s conference, and all of those deaths could have been prevented,” he added.
“We are witnessing the starving and the crippling of an entire generation,” the UN Secretary-General warned, saying that two-thirds of the population or nearly 19 million people need emergency aid in Yemen.
They include some 3 million malnourished children.

What kind of American or European would support and work in the war industry today?