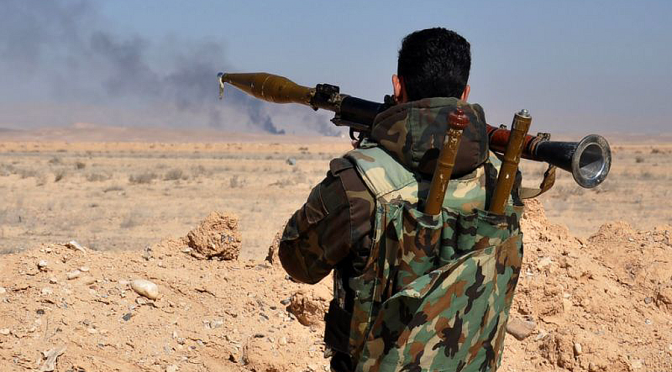 In what could be another war crime committed by the uninvited US and UK forces in Syria, a convoy of Syrian tanks was fired upon while performing its anti-terror duties, causing ”a number of deaths and some material loses.”

Syria and its ally Russia have condemned air strikes by the US-led coalition on pro-Syrian government forces near the Jordan border.
Syria said the strikes were a “blatant attack on forces fighting terrorism”, while Russia said they breached the country’s sovereignty.
The convoy was hit on Thursday as it neared a group of US-backed rebels and a Western Special Forces unit in Tanf.
The US said Russia was told in advance and that warning shots were ignored.
http://www.bbc.com/news/world-middle-east-39972271

However, Russia has denied they’ve been forewarned.

Lavrov said he was “unaware” that Russia had been given any warning of the strike, and said preliminary information suggested there were civilian casualties.
“We are still confirming the details but according to some reports several dozen civilians died as a result of this strike,” he was reported as saying by Russian news wires.
His comments echoed an earlier statement by a deputy, Gennady Gatilov, who said the coalition’s strikes on Syrian forces were “unacceptable” and could hinder peace talks.

Russia’s Deputy Foreign Minister Gennady Gatilov said the strikes were “completely unacceptable”, according to state-run news agency Ria Novosti.
He was quoted as saying in Geneva that any military action leading to an escalation of the conflict would have an impact on the political process.
The US-backed Maghaweer al-Thawra rebel faction said that the convoy had been about 27km (17 miles) away and contained four tanks.
The Syrian government has invited only the Iranian, Hezbollah, and Russian forces to help them topple the Deep State pawns known as the Islamic State.
We consider this latest display of US arrogance as a means to make Trump look good in the eyes of the US allies, as he tours the region.

US Attack on Syrian Forces, A Criminal Act of War: Asserting the “Safe Zones”, Perpetuating the War | Global Research

By Tony Cartalucci
In legal terms, it was both an act of war and criminal. The US military is currently occupying Syrian territory without invitation by the Syrian government and without any form of mandate from the United Nations.
In geostrategic terms, the United States is attempting to assert itself and its geopolitical strategy of establishing and subsequently expanding “safe zones” inside Syrian territory in a bid to topple the Syrian government, then divide and destroy the Syrian state.
Foreign Policy, a clearinghouse for corporate-financier funded think tank policymakers, in an article titled, “US Bombs Syria Regime for the First Time,” would admit:
The strike showed American commanders are willing to use force to maintain de facto safe zones in the country’s east, where U.S. forces are training local militias to battle the Islamic State and provide security in liberated regions.
While Foreign Policy’s article confirms US intentions of carving out “safe zones” in Syria, it misleads readers regarding the purpose of doing so.
While it claims that these “safe zones” are intended to host training for “local militias to battle the Islamic State,” US intentions to create such zones stretches back long before the threat of the Islamic State was introduced into the conflict.
US policymakers themselves openly admitted the “safe zones” were meant to both perpetuate the conflict and seek a more long-term process of regime change after initial attempts to stampede the government in Damascus out of power failed in 2011.
[scribd id=108893509 key=key-1wym02ye0kox077arrq mode=scroll]
A March 2012 Brookings Institution paper titled, “Middle East Memo #21: Saving Syria: Assessing Options for Regime Change” (PDF), proposes the concept of “safe zones” or “safe-havens” not to fight the yet-to-be invented Islamic State, but specifically to assist US-backed regime change. It claims (emphasis added):
An alternative is for diplomatic efforts to focus first on how to end the violence and how to gain humanitarian access, as is being done under Annan’s leadership. This may lead to the creation of safe-havens and humanitarian corridors, which would have to be backed by limited military power. This would, of course, fall short of U.S. goals for Syria and could preserve Asad in power. From that starting point, however, it is possible that a broad coalition with the appropriate international mandate could add further coercive action to its efforts.
A 2015 Brookings paper titled, “Deconstructing Syria: Towards a regionalized strategy for a confederal country” would elaborate on the nature of these zones, not as bases for fighting terrorism – but as a means of incrementally dividing and literally “deconstructing” Syria as a unified nation-state (emphasis added):
The end-game for these zones would not have to be determined in advance. The interim goal might be a confederal Syria, with several highly autonomous zones and a modest (eventual) national government. The confederation would likely require support from an international peacekeeping force, if this arrangement could ever be formalized by accord. But in the short term, the ambitions would be lower—to make these zones defensible and governable, to help provide relief for populations within them, and to train and equip more recruits so that the zones could be stabilized and then gradually expanded.
It would also elaborate regarding the role the Islamic State specifically plays in all of this – not as an enemy to be defeated – but as a pawn to be used against the Syrian government:
The  idea would be to help moderate elements establish reliable safe zones within Syria once they were able. American, as well as Saudi and Turkish and British and Jordanian and other Arab forces would actin support, not only from the air but eventually on the ground via the  presence  of  special  forces  as  well. The  approach would  benefit  from  Syria’s open desert  terrain  which  could  allow  creation  of  buffer  zones  that could  be  monitored  for possible  signs  of  enemy  attack  through  a  combination  of  technologies, patrols,  and other methods that outside special forces could help Syrian local fighters set up.
Were Assad foolish enough to challenge these zones, even if he somehow forced the withdrawal  of  the  outside  special  forces,  he  would  be  likely  to  lose  his  air power  in ensuing  retaliatory  strikes  by  outside  forces,  depriving  his  military  of  one  of its  few advantages over  ISIL. Thus, he would be unlikely to do this.
Here, not only is the focus on tempting the Syrian government into an attack to justify wider direct conflict between US and Syrian forces, Brookings policymakers openly use the prospect of stripping away tools the Syrian government is using to fight the Islamic State as leverage while the US invades and occupies larger stretches of Syrian territory.
The use of the Islamic State as a pawn against the Syrian government should come as no surprise and is hardly a “conspiracy theory.” The US Defense Intelligence Agency (DIA) itself in 2012 would publish a memo (PDF) detailing specifically what a prescribed “Salafist” (Islamic) “principality” (State) would be used for by the US and its allies:

If the situation unravels there is the possibility of establishing a declared or undeclared Salafist principality in eastern Syria (Hasaka and Der Zor), and this is exactly what the supporting powers to the opposition want, in order to isolate the Syrian regime, which is considered the strategic depth of the Shia expansion (Iraq and Iran).

The DIA memo then explains exactly who the supporters powers are – as well as who the principality’s enemies would be:

The West, Gulf countries, and Turkey support the opposition; while Russia, China, and Iran support the regime.

America’s strategy in Syria is an admittedly more drawn out process than was used against Afghanistan in 2001, Iraq in 2003, and Libya in 2011. All three nations are now destabilized and virtual breeding grounds for terrorism, conflict, instability, and human catastrophe – cautionary examples of Syria’s fate should US foreign policy “succeed” there as well.
With the recent strike, the US proves that it will continue its illegal, unwarranted aggression in Syria until it either topples the Syrian government and succeeds in transforming the nation into yet another failed state amid its growing collection of global military interventions, or until the US is stopped by sufficient deterrence by Syria and its allies in Moscow and Tehran.