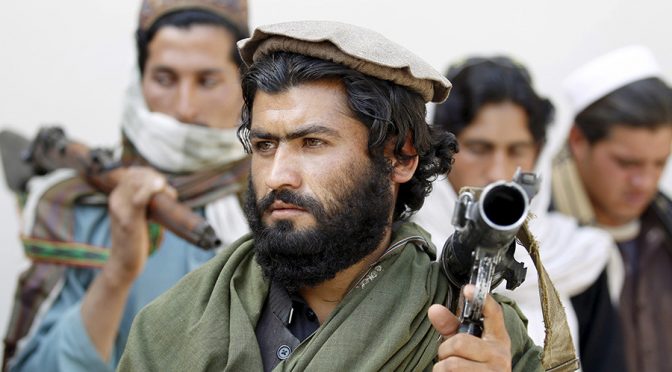 The West continues to self-destruct and has no other option but to sacrifice whatever is left of its reputation to save itself financially. While NATO is persistent with its anti-Russia rhetorics to save itself from obsolescence, the White House is forced to sustain the “Iran is terrorist” line to extort the Arabs.
A much needed $350 billion shot in the arms for the military industrial complex should keep the warmongers happy, and so are the white supremacists as hundreds of jobs will be created.
But the most shameful act this week is when the First Family of the US swallow their own words, and danced to the tune of the House of Saud.

‘Sucking up to Saudis is long US tradition, every president does it’ (Op-Edge) https://t.co/ut1Ny3ew8X https://t.co/rH9km0XB4A pic.twitter.com/RLm6PaihXk

The irony and the hypocrisy: Bannon sitting next to the grandson of Mohamed Bin Abdul Wahhab, the founder of wahhabism.
/ht @Lamia_of_Arabia pic.twitter.com/bj2lfZJOhb

Trump Talks about Fighting Extremism from Birthplace of Wahhabism

It’s ironic that President Trump talked about fighting extremism and terrorism in Saudi Arabia, the center and the birthplace of Wahhabi Islam that has been responsible for most of the terrorism in the region, said Hamed Mousavi from Tehran University.
On Sunday, US President Donald Trump addressed leaders of 55 Muslim-majority countries who gathered for the Arab-Islamic American Summit in Saudi Arabia’s capital Riyadh.
RT:  Trump repeatedly attacked Iran in his speech on Sunday and his secretary of state, Rex Tillerson says Washington is ready to support countries in the region in their conflicts with Iran. What does this mean for US-Iran relations?

#Trump should discuss avoiding ‘the likes of new 9/11’ while in Saudi Arabia – Iran FM https://t.co/3Sus03bWNP pic.twitter.com/yqZdnr9xEI

Hamed Mousavi: I think it is quite ironic that Donald Trump is talking about fighting extremism and terrorism at the center and at the birthplace of Wahhabi Islam that has been responsible for most of the terrorism in the region. In fact, Saudi Arabia Islamic madrasas in countries as such as Pakistan and Afghanistan have been responsible for the spread of terrorism in the region. Yet, he has the audacity to accuse Iran of supporting terrorism, whereas Iran is perhaps one of the very few countries in the Middle East that is fighting against ISIS today.
That is not something that Saudi Arabia can claim, which has actually funded these groups and has been the ideological founders of groups such as ISIS and Al-Qaeda. Furthermore, Trump in Washington essentially is going to make life very difficult for Hassan Rouhani. Rouhani was just reelected on a mandate to promote moderation and pragmatism both at home and abroad. Nevertheless, with Trump in power, there is a real barrier in terms of the relation between Iran and the US.

RT:  Trump has accused Saudi Arabia of funding terrorism in the past. Is everyone who gathered Sunday at that address in Riyadh able to look past that fact?
HM: Yes, this is a complete reversal from Trump’s own position. Not only did he accuse Saudi Arabia of terrorism and extremism during the campaign, he very bluntly said that Saudi Arabia was responsible for 9/11 and that Hillary Clinton should return the money the Saudis donated to the Clinton Foundation. Now he has become best friends essentially with them, making his first official foreign trip to Saudi Arabia.
Aside from that and whether people will believe Trump or not, I think Trump is seen as very insincere in the sense that he hasn’t only changed his position regarding Saudi Arabia, he has also been quite hostile to both Muslims and Islam. He said during the campaign that Islam is the enemy of the US. He didn’t differentiate between the different kinds of Islam. Nevertheless, that was his position, and he also issued the visa ban first for seven Muslim-majority countries, then on six Muslim-majority countries, and today he is taking a different position. I think people will find it very difficult to accept his rhetoric basically.

Oh, the things you’ll do for America, the beautiful.
There’s also a developing trend in DC this month. They are now admitting that they aren’t in the Middle East to introduce democratic governments. They just want to fight terrorism. So, the US bomb Syrian positions again, as the latter is gaining momentum towards Deir Ez-zor where large oilfields exist.
Yes, the US military is still acting as protector for the terrorists to foster its own ambition of partitioning the Syrian oil fields, on top of the ongoing Saudi genocide in Yemen.  But don’t look over here.
Instead, look what just happened over there in Manchester…

Yesterday, the last CIA terrorists were allowed to leave the city of Homs unharmed. The Syrian military has been reduced to accepting painful compromises to save itself. That’s one incentive of running a terrorist organization. You can recycle and reassign your militants in other zones of conflict that you’ve started a day before.
Could they do the same terror activities to nuclear-armed North Korea?

3 thoughts on “West Uses Semantics and Doubletalk to Stay Funded”