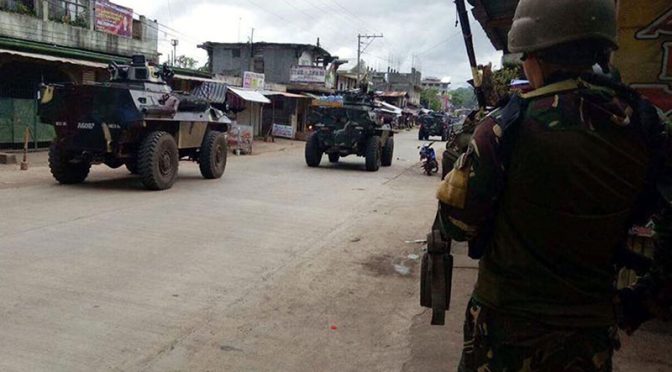 After the Maute Terror Group had struck and burned several facilities in Marawi City yesterday, Philippine President Rodrigo Duterte declared a Martial Law for the entire island of Mindanao, Southern Philippines. He will also be cutting short his 5-day state visit to Moscow, and will be going home today.
Updates: Duterte has already arrived in Manila.

The Armed Forces of the Philippine has announced the deaths of 13 Maute terrorists during its recovery operations in Marawi.

In one newscast, 11 civilians were shot to death by the terrorists for being Christians. A Catholic priest, together with several churchgoers, were held hostage and served as human shield as the terrorist group started escaping from Marawi City. Their whereabouts is yet unknown at this point.

The Maute Group has sworn allegiance to the CIA Islamic State, and is also allied with another CIA creation, the Abu Sayyaf terror group, which suffered devastating loss when all their terror agents were killed in their attempt to disrupt the ASEAN related meeting in Bohol Island, last month.
The attack, which served as the tipping point for the imposition of a 60-day Martial Law, included the occupation of a hospital, city hall, part of the Mindanao State University compound, and the burning of the city jail, church, school and a college.

Some houses being set on fire by ISIS. People don't know where to go. They are stuck in Marawi. ISIS not letting them leave the area. pic.twitter.com/g4NkTauYrS

My cousin saw this from their home; allegedly the Marawi City jail. All detainees were freed by ISIS. pic.twitter.com/2rtmBq67qj

A priest and several churchgoers are being held captive by the terrorists, who vowed to kill them if government forces are not withdrawn.

The group continues to roam on the main city street, and has full control of the two bridges leading to the city. The whole of Marawi City has no power and Maute snipers are scattered all around the city.
This recent attack is triggered when government troops were serving the warrant of arrest to one Isnilon Hapilon, who is identified as the leader of the Abu Sayyaf terror group but has since joined the Maute group.
https://www.youtube.com/watch?v=ql5Fl4_FtLM
Hapilon was reported earlier to have sent surrender feelers to the government for being “tired of running away from government operations” in his lair in Basilan, just as his operatives were killed, one by one, during a decisive military operation against them in Bohol.
Duterte has excluded from his peace negotiation efforts all terror groups which have sworn allegiance to the Islamic State.
As of 11PM GMA+8 last night, 3 government soldiers and one policeman were killed and 12 wounded. Reinforcements from the nearby city of Zamboanga and from other areas are coming.
70% of the population in Marawi have already left the city, while the remaining 30% have chosen to protect their source of living.

Duterte’s state visit to Moscow is meant to strengthen the bilateral ties between the two countries through an increase in trade, tourism and military exchanges. The Duterte entourage is shopping for attack helicopters and precision guided missiles for the purpose of ending the insurgency and terrorism in the South.
The Philippine government is appreciative of the effort on the part of Vladimir Putin to reschedule his appointments and see Duterte prior to the latter’s early departure.

Duterte has been scheduled to speak at the Moscow State Institute of International Relations to stress his independent foreign policy, and another engagement with the Russian business community to explore possible investment opportunities for them.
Putin has expressed openness in establishing cooperation in various areas namely: “machine building, transport infrastructure, energy and possibly military technical cooperation.”

Duterte is required by law to report to the Philippine Congress within the next 48 hours to explain his martial law imposition for Mindanao, and the latter will determine whether the default duration of 60 days is adequate to quell the rebellion, or will it be extended.

7 thoughts on “Duterte Has Declared Martial Law in Mindanao, Philippines to Quell Terror”