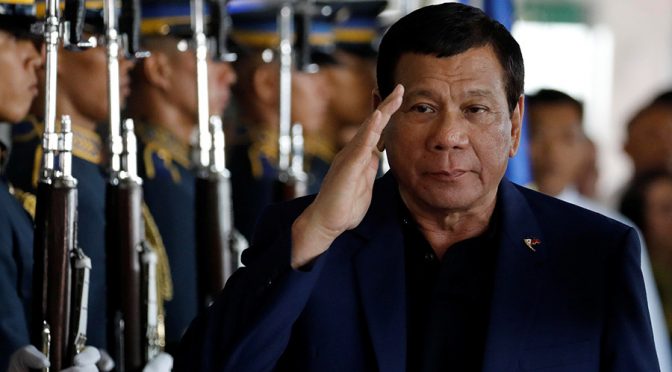 The Deep State plan to establish a Greater Israel through the use of proxy terrorists is failing. But it doesn’t mean that the terrorist organization known globally as the Islamic State will just fade away. In fact, the plan to spread terror worldwide has always been on the drawing board of the Cabalists.

Here in the Philippines, the present administration of Duterte is dealing with the problem head on.

25 May, 2017 13:31
Someone has unleashed ISIS, which forces the Filipino government to come down hard, to declare martial law, and then the international organizations will demonize Duterte, Patrick Henningsen, Executive Editor of 21st Century Wire.com, told RT.
Fighters linked to ISIS went on a rampage in the Philippines’ city of Marawi. The country’s President Rodrigo Duterte has declared martial law there.
RT:  With terrorism as his new target, do you think Duterte will receive much international support, given that his war on drugs was condemned by many and called too brutal?
Patrick Henningsen: This President is already under intense scrutiny by the sort of wider international community, if you will, and specifically by the US. He has sort of gone at loggerheads with Washington on more than one occasion. This is a bit of a tight spot, a bit of a Catch-22 for Duterte in the Philippines because he will already have been somewhat demonized for his heavy-handed approach to organized crime and the organized drug trade that has affected his country. So comparisons will be made to Ferdinand Marcos. This is bit of public relations issue for this President and this government. It will have to be ironed out.
At the end of the day he is in the exact same situation, very similar situation that Bashar Assad in Syria was in early on in the sort of the terrorist takeover of that country in the early days of the FSA, and then Al-Nusra Front, and then later ISIS. So he has to balance out this public relations issue – is he too heavy-handed? Most people would say looking at Syria that you can’t be heavy-handed enough when it comes to dealing with ISIS. So we’ll see how much progress he makes on the island in the next few weeks.
RT:  With terrorism apparently spreading around the world, don’t you think Duterte-style harsh measures should be an option now?
PH: What is really interesting if you look at Syria, as the test case, we just came back from Syria on a one-month fact-finding mission. If there was any criticism of Assad – especially early on in 2011-2012, but especially in the beginning of the crisis in Syria – the criticism from Syrians would have been: “He wasn’t heavy-handed enough.” You can sort of look at that situation and Duterte is probably looking at that situation in Syria, and then taking a sort of more tougher tack because if this gets out of hand, if he starts losing cities, towns, provinces or governorates to terrorist control, then you have a really big problem on your hands. There is also this issue of military equipment. Are they ready to deal with that size of a problem? Quite possibly not. And if they are, they will need to be able to sort of rearm and modernize some paramilitary aspects of the Philippine forces, which they may be or not may not be ready for. So going in hard, going in strong in the beginning, might seem like a better option now after looking at what has happened in Syria over the last six years.

RT:  Human Rights Watch [HRW] has already called on Duterte to ensure the rights of civilians would be protected under the law. Do you think the watchdog is being subjective? Would it happen with any other country?
PH: HRW took the same tack with the government in Syria and President Bashar Assad for the last five or six years. Here we have the Philippines, geopolitical foe for the moment of the US, of the West. It’s getting the same treatment from the NGO complex, led by people like HRW and Amnesty International, who will then sort of wage a public relations war against governments that maybe aren’t friendly at the moment to the US.
Certainly, that is what we’ve seen with Syria. Someone unleashes ISIS – if this is indeed ISIS in the Philippines – someone has unleashed ISIS. Then the government is forced to come down hard, to declare martial law, and then the international organizations will demonize this government. So this is an exact same formula as what we saw in Syria, albeit on a smaller scale, on a smaller level. Essentially, we’re looking at the same dynamic, and especially with the negative public relations side that the Philippine government is looking at, just like Syria went through.

Even with the inadequacy of their present defense equipments, the Philippine soldiers were able to recover hundreds of civilians that were caught in the crossfire, or were used as human shields by the terrorists, earlier.

They were also able to kill more than a dozen terrorists, and contain the rest within the sieged area of Marawi, where some of the Maute clan members are also suspected of having provided logistical and intelligence support to Maute Group and relatives in the Abu Sayyaf terror group, in many occasions.
The various terrorist groups in Mindanao are also known to have enjoyed some level of support from the local executives, who are also engaged in drug trafficking.
That is precisely the reason behind the proclamation of the Martial Law in Mindanao, i.e. to allow the government operatives to enter into the houses of the clan members and neutralize them.
While the Duterte government is decisive on ending terrorism in Mindanao militarily, it is also doing all it can to improve the economic conditions of the population in the region through massive infrastructure projects.

The island of Mindanao has long been neglected by succesive Manila governments which made it an easy prey for terrorist recruitment activities.