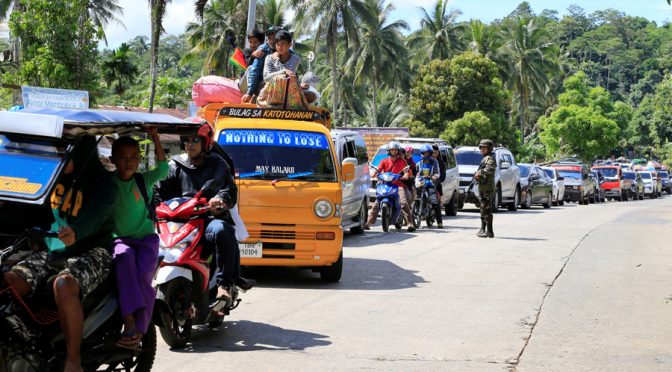 The Maranaos, Muslim inhabitants of Marawi City, Philippines, have shown how much they cared for their Christian neighbors by doing all they can, i.e. even at the risk of being killed in the process, to protect and insulate the latter from the terrorist onslaught.
A family of one Muslim trader has recently been asking the government to stop the surgical airstrikes which have spilled over to their store. Luckily, the Muslim trader, together with his 18 Christian store clerks were on the ground floor at the time of the airstrikes, and they all survived.
The store owner refused to leave the store in spite of the pleading by his own family, which has since evacuated from the city, for fear that his Christian helpers will be killed at the checkpoint manned by the terrorists.
in similar expression of generosity, Muslim Salma Jayne Tamano and her Maranao relatives evacuated from the besieged city of Marawi with 39 Christian settler families. Said 39 families have not eaten solid food for the past 3 days.

The city of Marawi is the most progressive Muslim city in the country. It is the home of industrious Muslim traders and is a host of several institutions of higher learning.
It’s been reported that Muslim students were helping their fellow Christian classmates escape the city by lending them their Muslim dress and teaching them to memorize the Muslim prayer.

As the government forces gained control of most of the city streets, a grim picture has emerged where groups of civilians were shot and killed, and thrown in some ditches, just because they were not able to speak Maranao, or even Muslims who were not able to recite their own prayer.

During their escape, Muslims purposely embed the Christians at the center, or behind the fleeing group, so that they couldn’t be engaged by the rampaging terrorists.

The government has imposed an overnight curfew and fully cordoned off the entire Marawi City to prevent the escape of terrorist leader Isnilon Hapsilon, while conducting house to house and floor to floor sweeping operations against the surviving terrorists, who have suffered heavy casualties [61 dead] all throughout the week, which included children as young as 10 years old.

Several Maute terrorists escaping from the decisive government operations were already caught at the military checkpoints.
The Mauti Group intended to burn Marawi City to the ground within the time of the month of Ramadan, AFP Chief Año said in a press statement. He said Maute group members were surprised by the security forces which raided the safehouse in Barangay Basak Malutlut occupied by Isnilon Hapilon, “the taunted ‘Amir’ of ISIS in the Philippines.”

98% of Marawi residents have fled the city as of today.
The remaining 3,000 trapped civilians may be thinking they have nowhere else to go, although the social welfare department is still waiting for them at the designated evacuation centers.
Some said that Maranaos don’t like living in temporary government shelters, but would prefer to stay with their relatives in nearby cities, or stay in Marawi.

Official death count stands at 98 total: 65 terrorists, 19 civilians [shot by terrorists], 17 soldiers, and 3 police. Wounded in action: 69 soldiers, 3 police.
So, while the Maute Group tried to exploit the Christian-Muslim divide in order to advance their own, and that of US economic agenda, the population has instead shown that it’s a battle between terror and humanity. According to a leaked diplomatic cable released by Wikileaks, Mindanao is hosting at least 70% of oil, gas and mineral deposits in the Philippines that the US is very much interested in.
The bravery that is shown by our Muslim brothers and sisters in Marawi City is what will help Mindanao survive and suppress this CIA instigated terror.
In fact, no less that the head of the Moro National Liberation Front, Nur Misuari, has offered the Duterte government the services of his army to join forces with the government to finally end the ISIS scourge in the region.