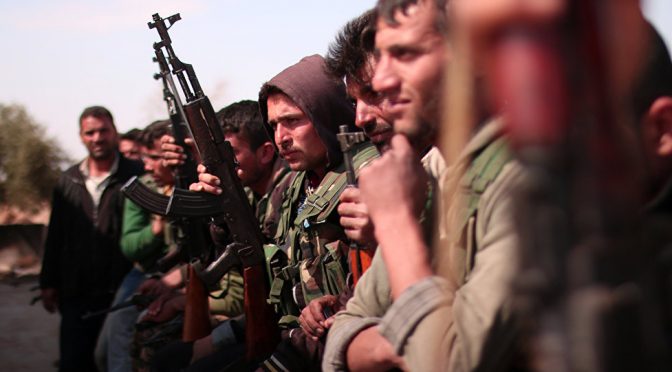 Raqqa served as the de facto capital of the Islamic State for more than 5 years, and the news that the terrorists are leaving the city for having to other option should have been very much welcomed. But why we can’t afford to do so? Because this is just to accommodate the Plan B option of the US invaders, and that is to partition Syria for the benefit of Israel.
Raqqa will be occupied by US friendly forces in Syria, and perpetual future conflicts will be greatly assured until much of the Syrian lands will be annexed to Israel, as what happened to Palestine over the years.

08:13 01.06.2017(updated 10:37 01.06.2017)
MOSCOW (Sputnik) — The ministry said in a statement the Syrian Democratic Forces (SDF), together with the US, UK and French special forces, have “virtually blocked” Raqqa from the north.
“At the same time, the SDF stopped its offensive, resulting in ruptures in the IS’ [Daesh] ring of encirclement. Using this, the terrorists cross the Euphrates and seek to transfer their formations in the southern direction of Syria,” it said.
The Russian troop command in Syria will do its utmost to prevent Daesh from breaking through further south from Raqqa, the ministry added.

Internally displaced people who fled Raqqa city ride a tricycle with their belongings as they leave a camp in Ain Issa, Raqqa Governorate, Syria May 4, 2017

“The command of the Russian grouping of forces in the Syrian Arab Republic will continue to take all necessary measures to prevent the breakthrough of the IS [Daesh] units from Raqqa to the provinces of Homs and Hama,” it said in a statement.

According to the Defense Ministry, Russia’s Aerospace Forces thwarted two attempts by Daesh to break through to Palmyra from Raqqa in the past week.

“The first convoy of terrorists from Raqqa heading to Palmyra was destroyed by the Russian Aerospace Forces on May 25. IS militants made another attempt to break through to the Palmyra area on the night of May 29 to 30. Three motorcades left Raqqa under the cover of darkness and took several routes southward,” the ministry said in a statement.

They also destroyed more than 80 Daesh jihadists, 36 vehicles, eight fuel trucks and 17 pickup trucks that tried to flee the occupied city of Raqqa on Tuesday.

“The Russian Aerospace Forces hit the detected targets. The IS lost more than 80 terrorists, 36 cars, eight fuel trucks and 17 pickup trucks equipped with mortars and large-caliber machine guns,” the ministry said in a statement.

The US invasion by terror proxy in Syria is motivated by the Noble Energy’s discovery of a huge deposit of natural gas in the Levant Basin.

It’s also highly deplorable that while the Russian-led coalition are the only ones sending food aid to the Syrians, and are really targeting IS terrorists in the region, the US government leeches are focused more on how to profit through the “disappearance” of the $2 billion worth of arms to the terrorists.

What this means is that the American Commandos embedded within Kurdish YPG are now being shot at by their own weapons, and by their own government’s terrorists.
Not a very good way to spend the US taxpayers’ money with, or waste American lives, doesn’t it?

3 thoughts on “Daesh Terrorists are Leaving Raqqa, But Why are We Not Celebrating?”