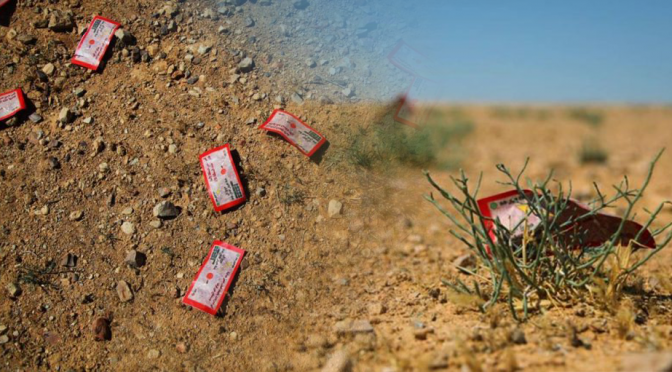 In one of its most blatant display of arrogance, the US military has been dropping leaflets warning the Syrian Army to refrain from advancing their troops towards al-Tanf road, and demanding that the latter should instead retreat from its current position.
The US military has fired upon the Syrian military after it has gone so near to their position, about 2 weeks ago. The US military are in Syria uninvited, to rescue the Syrians from themselves, just like the Iraqis and Libyans before it.
According to reports both by Leith Abou Fadel of Al-Masdar and from SouthFront, the leaflets were dropped after the Syrian military had advanced to the Shehmi area, which is located about 55km from the city of Tanf. The leaflets not only warned the SAA to stop advancing but demanded that it withdraw to the Zaza triangle.
The images can be seen at the SouthFront website in the article “US-Led Coalition Drops Leaflets Warning Syria Not To Approach Al-Tanf Town.”
According to local sources cited by SouthFront, the leaflets contained sectarian expressions.
Syrian TV reported that the SAA has managed to advance in and around the Scientific Research area of the eastern desert of the Suweida countryside. The Syrian military was also able to repel an attack launched by the Western-backed terrorist group known as the Free Syrian Army in the same area.
In addition, SouthFront has reported that the “US-led forces” used Switchblade suicide drones in order to target the SAA positions with Grad missiles south of Zaza.
The move toward Tanf is significant because it puts Syrian military forces moving toward U.S. and U.K. Special Operations Forces stationed at the same location.
The base, located at al-Tanf, has been operational for around a year.
As RT reports,

The area is of substantial strategic importance to the regime, as controlling it would help re-establish a road link with Iraq to the south.
In June 2016, Russian jets, providing top cover for the Syrian military, bombed the base. No casualties were reported.
In April, the base reportedly came under attack from Islamic State (IS, formerly ISIS/ISIL).
The UK government refused to comment in line with its long standing policy relating to Special Forces operations.
The US has reportedly warned against further encroachment on the base and it remains unclear how foreign troops would respond to contact with Syrian forces.
The precise disposition and number of UK forces in unknown though they are likely to be either British Army personnel from 22 SAS or Royal Marines from the SBS – Britain’s so-called ‘Tier 1’ operators. Other units that operate under the same ‘no comment’ umbrella include the Special Forces Support Group (SFSG), formerly the 1st Battalion of The Parachute Regiment, which supplies additional troops to SF operations and the shadowy Special Reconnaissance Regiment (SRR), which provides expert close surveillance capabilities.

The possibility of a direct Syrian clash with US/UK forces and thus a Russian clash with US/UK forces is now becoming very real as the Syrian government does not seem ready to allow the US and UK to simply invade and occupy any more territory than they already have.
By now, it should be clear that the presence of the FSA in the Tanf area is nothing more than ruse designed to provide a tar baby for the Syrian military to fire upon – going under the guise of “moderate rebels” – which will then allow the West to scream that Syria is attacking moderates, violating agreements, and threatening American soldiers, and thus justify some type of U.S./U.K. reprisal.
Still, it appears that Syria and its Russian allies may be reaching the end of their patience with America’s arrogant invasions and chest thumping in Syria. The obvious strategy for the Syrian military is to lift the siege of Deir ez-Zour and retake Raqqa before America, Kurds, or America’s Kurdish terrorist forces are able to do so and thus begin choking the ability of terrorists to move back and forth, supply, and direct military efforts against the Syrian government. After the immediate goal is reached, the SAA will be tasked with surgically removing the cancer inflicted upon the country by the United States.
Brandon Turbeville has published over 1000 articles on a wide variety of subjects including health, economics, government corruption, and civil liberties.

4 thoughts on “The Uninvited US Military Drops Leaflets Warning Syrian Military Not to Advance, But Retreat”