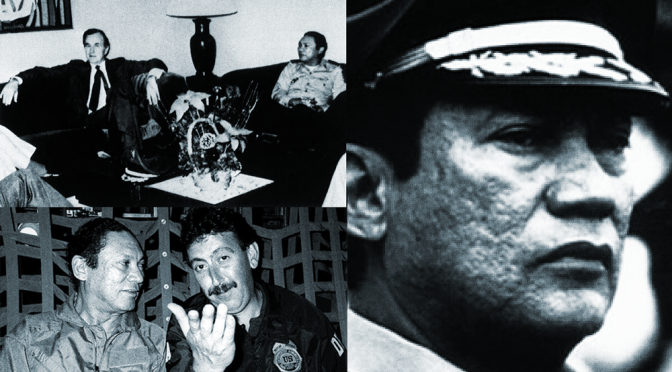 By Jonathan Marshall
The death of former Panamanian strongman Manuel Noriega on May 29 elicited few if any tears. But it should have sparked more reflection in the United States on his ugly history of service to the CIA, the hypocrisy of Washington’s sudden discovery of his abuses once Noriega became an unreliable ally against the Nicaraguan Sandinistas, and the George H.W. Bush administration’s bloody and illegal invasion of Panama in December 1989.

In fairness, many progressives and mainstream journalists have called attention to this troublesome history over the years. But few have dared to question the nearly universal condemnation of Noriega as a protector of international drug traffickers. That incendiary claim — first broadcast loudly by the unlikely trio of right-wing Sen. Jesse Helms, R-North Carolina; liberal Sen. John Kerry, D-Massachusetts; and investigative journalist Seymour Hersh — galvanized the American public to support his ouster.
After the U.S. invasion, which killed hundreds of Panamanians and 23 U.S. soldiers, Noriega was arrested on Jan. 3, 1990 by armed U.S. drug agents.
President George H. W. Bush declared that Noriega’s “apprehension and return to the United States should send a clear signal that the United States is serious in its determination that those charged with promoting the distribution of drugs cannot escape the scrutiny of justice.” U.S. Ambassador Deane Hinton called the invasion “the biggest drug bust in history.”
Convicted in 1992 on eight felony counts following what officials called the “trial of the century,” Noriega was sentenced to 40 years in jail. Although released early from U.S. incarceration, he spent the rest of his life in French and Panamanian prisons.
The resulting publicity created lasting myths about Noriega and drugs. Journalists who should know better have described Noriega as “one of the world’s biggest drug kingpins,” to quote Time magazine.  In fact, Louis Kellner, the U.S. attorney who oversaw his Miami indictment and trial admitted, “Noriega was never a major player in the drug war.”
Indeed, at worst, he was a small fry compared to the military rulers of Honduras, whose epic protection of the cocaine trade was tolerated by Washington in return for using that country as a staging base for Contra operations against the Sandinista-led government of Nicaragua in the 1980s.
Deeply Flawed Trial
A few close observers of the long, expensive, and controversial trial believe it failed to prove Noriega’s guilt at all.

David Adams, who covered it extensively for the London Independent, said the government’s case was “marred by incompetent witnesses, false testimony, and poor presentation.”
Newsday’s Peter Eisner quoted Judge William Hoeveler, who presided over the trial, as saying “the outcome could have been different” if Noriega had been better represented.
Although the government put more than two dozen people on the stand, their testimony was not always relevant or credible.
Paul Rothstein, Georgetown University law professor and former chairman of the American Bar Association’s criminal evidence committee, said of the government’s witnesses, “What promised to be the trumpeting of elephants turned out to be the whimperings of mice.”
Big-time drug bosses enjoyed great rewards for telling the jury what the government wanted. Observed reporter Glenn Garvin, “To convict Noriega, the strike force had to make a flurry of deals with other accused narcotraffickers, bargaining a collective 1,435 years in prison down to 81.”
The fierce Noriega critic R. M. Kostner declared, “The prosecution was shameless in its bribery of witnesses. What co-defendants got for flipping made me sometimes wish that I had been indicted. The proceedings were almost totally politicized. It was clear long before they opened that, regardless of evidence, Noriega could not possibly be acquitted – a very sad thing for the United States.”
Other witnesses who never took the stand contradicted the government’s case years later. Retired Medellin cocaine lord Juan David Ochoa claimed in an interview with Frontline that “at no moment did [Noriega] protect us. . . . As far as I know he had nothing to do with the drug trade.”
Greg Passic, former head of financial operations for the DEA, said, “The Colombians I talked to in the drug transportation business said they didn’t deal with Noriega at all. To deal with him you would just have to pay him more money. They didn’t need it. It would be expensive.”
In fact, DEA officials repeatedly lauded Noriega’s cooperation with their anti-drug investigations, both in public letters of support and in private. Recalled Duane Clarridge, former head of Latin America operations for the CIA, “The DEA had told us that they were getting great support in Panama, and from Noriega in particular, in interdicting drugs.”
More than a year after the U.S. invasion, when it was absolutely impolitic to voice such sentiments, one “federal drug enforcement source” told a reporter, “Noriega was helping us, not ten percent, not twenty percent of the time, but in every instance we asked him to do so, one-hundred percent of the time. . . . These were key operations . . . that struck at both the Cali and Medellin cartels.”
Even the U.S. ambassador to Panama in the final years of Noriega’s rule, Arthur H. Davis Jr., said in an oral history interview, “all I know is that, all the time I was there, Noriega . . . cooperated one hundred percent with our people. Anytime we had a ship that we wanted to be interdicted on the high seas and we asked permission, they gave permission. . . . Anytime there was some prominent drug man coming up and we knew about it, Noriega would help us with it. And when we found out about things, the [Panamanian Defense Forces] would go over there and round them up and turn them over to us.”
Turning Against Noriega
One of the high points of Noriega’s cooperation was Operation Pisces, a three-year undercover probe that culminated in 1987. Attorney General Edwin Meese called it “nothing less than the largest and most successful undercover investigation in federal drug law enforcement history.”

Among those indicted were Medellin Cartel kingpins Pablo Escobar and Fabio Ochoa. Panama made 40 arrests and seized $12 million from accounts in 18 local banks. Said one U.S. prosecutor who helped direct the case, “The Panamanian officials we were dealing with were sincerely cooperative. . . . They could have breached security, and they didn’t.”
The operation may have pleased the DEA, but it angered the country’s financial elite, who directly profited from money laundering. One local banker warned, “this could end the Panamanian banking system, because people will no longer believe they can count on bank secrecy.”
Within two months, spooked investors withdrew up to $4 billion of the country’s $39 billion in bank deposits, triggering the most serious banking crisis in Panama’s history.
A Western diplomat said of Noriega, “The bankers can bring him down. They are complaining in Washington and they’ve got a lot of clout.” The demonstrations organized that summer by Panama’s business elite — and Noriega’s heavy-handed response to them — triggered his eventual slide from power
The bankers were joined by angry cartel leaders, who viewed Noriega as an “obstacle to the functioning” of their money laundering operations in Panama, in the words of drug policy expert Rensellaer Lee.
A lawyer for the bosses of the Cali Cartel complained that his clients were “frustrated by the problems” Noriega created for them in Panama.
Cali leaders later got their revenge when they paid $1.25 million to bribe a drug trafficker to become a key witness against Noriega in his Miami trial. In exchange for the testimony, eager U.S. prosecutors agreed to cut nine years off the sentence of an unrelated Cali trafficker — brother of one of that cartel’s senior leaders.
When Noriega’s defense team cried foul, a federal appeals court declined to order a new trial, but criticized the government for appearing “to have treaded close to the line of willful blindness” in its eagerness to win a conviction.
Medellin leaders were just as unhappy with Noriega as those in Cali. A pilot for one of the biggest Medellin smugglers described Pablo Escobar’s reaction after Noriega approved a raid on one of his cocaine labs in May 1984: “He was just really out of whack with Noriega. He was like, ‘This guy is dead. No matter what, he is dead.”’
It would be foolish to assert that Noriega, alone among all leaders in Central America, kept his hands clean of drugs. But much of his personal fortune is easily accounted for from other sources, such as the sale of Panamanian passports on the black market.
Whatever Noriega’s involvement with drug traffickers, as I have shown elsewhere, the Bush administration displayed unbelievable cynicism when, even before his capture, it swore in a new president of Panama who had sat on the board of one of the most notorious drug-money-laundering banks in the country. His attorney general, who unfroze the bank accounts of Cali traffickers, later became legal counsel for the Cali Cartel’s top smuggler in Panama.
Following Noriega’s ouster, not surprisingly, cocaine trafficking began surging in the country. A year and a half after his arrest, unnamed “U.S. experts” told Time magazine that “the unexpected result . . . is that the rival Cali cartel established a base in Panama and has since inundated the country, along with Mexico, Guatemala and the Caribbean, with vast quantities of cocaine destined for the U.S. and Europe.”
Today, though, all that is forgotten, along with the questionable course of justice during Noriega’s trial. Noriega, even in death, deserves no eulogies, but he does deserve a more balanced judgment of history.