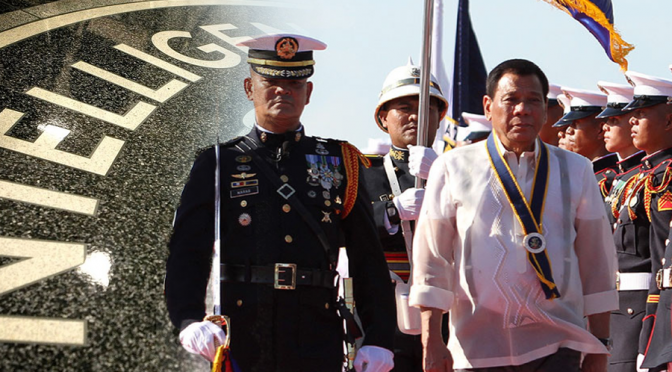 In light of the present spate of terror attacks on the Philippines, it would be prudent for us to share more about President Rodrigo Duterte’s experience with the Central Intelligence Agency of the Deep State.

Perrya | May 16, 2016
This is yet another mysterious CIA, NSA, mission gone amok by some accounts. It is one reason, still today, why the new president of the Philippines, Duterte, dislikes the American government. This is bad blood after all these years. According to CNN, intelligence reports showed that Meiring was a CIA covert operative that had ties with the Muslim militants in the Philippines.
There is little doubt that Michael Meiring, then 65, was some sort of NSA or CIA undercover operative. In 1992, he was in Manila and assigned to special agents of the NBI (Philippine’s FBI) and under the protection of Ricardo Diaz, Interpol section. As time went on, he developed ties with some shady personalities there like the former Moro National Liberation Front (MNLF) chairman, Nur Misuari, Moro Islamic Liberation Front (MILF) chief, Hashim Salamat, and suspected New People s Army (NPA) leader Father Navarro. Meiring also has close ties with shady people like MNLF Commander Tony Nasa and others in Cotabato who acted as front men for his dealings with the Abu Sayyaf. Abu Sayyaf was an al-Qaeda supporter and member who sought to spread terrorism into the Philippines.
He was mostly living in the Davao area on Mindanao, home to anti-government groups who are Muslim and seek independence from the Philippines. Even today, the US Embassy advises that foreigners to steer clear of the Cotabato region. Terrorists kidnap and hold for ransom Americans and others.
Meiring was a treasure hunter and claimed to have found $500 million left over from WW2. With this money, he supplied large amounts of explosives to the radical Muslim groups of Abu Sayyaf and supplied them with money for weapons. The U.S. Reserve Notes found in captured Abu Sayyaf documents trace back to Meiring. The treasure hunter probably was secretly funded.
The plot all came to a head when Meiring blew up part of his legs in May, 2002, while making a bomb of some type in his room at the Evergreen Hotel in Davao. He was rushed to Davao Medical Center. The prosecutor charged him with illegal possession of explosives. NBI found a partial fax in his room from London, England, warning him that he should be careful handling the explosive material. His American passport was found showing him to be California resident. After being rushed to Davao Medical Center, he was flown to Manila for additional medical treatment. The Manila hospital’s owner told reporters that he agreed to release Mr. Meiring despite his injuries after American officials (FBI) promised to issue a work visa for his daughter, a nurse.
In the two months prior to this explosion, there were several other explosions in the same region, killing 37 people and injuring 170 more. At the time, President Duterte, was then Mayor of Davao. When a reporter tracked him down in December, 2004, in Houston, Texas, Meiring said: “If this harms me in any way, you will find my power then, and you’ll find out who I am. But I will come for you. You harm me I will not let you off the hook.” That was the last anyone heard from him. He recently died in 2012, however. He was in the process of changing his name to Van der Meer.
Why?
After Sept. 11, 2001, terrorism was at its height across the globe and America was leading the crusade. President Bush wanted to push the Philippines closer to the US than it had before since being booted out a decade earlier. By creating a terrorist-like group in the Philippines or assisting one already there, add some bombings locally in Davao, it was hoped to push the Philippine government to sign a treaty to counter-terrorism, which is what happened. It was also possible that Meiring had gone dark. Rogue. A former CIA man whose sympathies had turned him into a supporter of Abu Sayyaf and used the US for funding them. The U.S. also wanted more bases in the Philippines after Duterte refused to base American drones at an old airbase near Davao in 2013. Was he a CIA operative posing as a Muslim militant bomber that caused the two bombings to convince the Abu Sayyaf group he was a terrorist? All along, obtaining information about the radical group? Most likely.
Today, Duterte is the new Philippine president for the next six years. He still is angry about the whole Meiring episode and how the FBI rescued the CIA operative from the Philippine justice to avoid exposure of the plot. Mr. Duterte said that his “hatred” for the United States was a “personal” sentiment that he could set aside in the national interest. He also said, though, that his anger over the Meiring case had not diminished.
This is what he recently said: “When a bomb exploded at the airport and followed by another explosion at the wharf several months after the hotel explosion that injured Meiring, that was when I started suspecting that the US could have had a hand in the said explosions. My suspicion was fueled when a military officer declared in public that the CIA have connections with known terror groups here,” Duterte said.
Thus, this is today’s setting for relations between the Philippines and the USA, home to nearly two million Filipinos. But, the question remains as to why the FBI intervened and swooped him up in Manila and taken back to the USA? Why did he then vanish again despite reporters searching to ask questions? If Meiring was of no importance to the American government, why intervene? As to the $500 million found in the sea from a WW2 wreck, that is laughable. Even today, when his wife has been asked about his life while in the Philippines in the 1990’s, she refuses to talk about it.

So, for the author Perrya, the $500 million is laughable. That’s one of the few errors in the above article. The second one is that, the CIA itself, with the able cooperation of some 5th columnists in the military, created the Abu Sayyaf in Muslim Mindanao.

Anyway, there’s a strong indication that President Duterte is going all the way against the CIA. To those people seeking his ouster, or his death, Duterte has this to say.

“Some people say that I should be very careful with the CIA, and I’d tell them, well, if it’s my time, it’s my time.
But somebody has to stand up against them and say, you know, don’t fuck with me.
Don’t fuck with me.” – Mayor Rodrigo Duterte,  President of the Republic of the Philippines

4 thoughts on “Blood Bath between Duterte and the CIA”