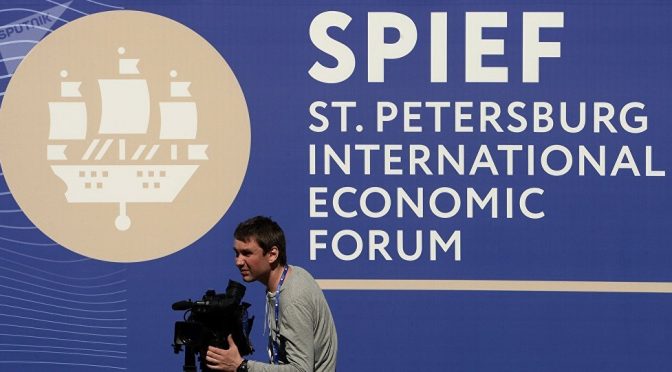 More than 200 leading experts from Russia, Europe, Asia, the US, Canada and Latin America have put their heads together to draw up the program of the high-profile economic gathering.
Said forum went out without a hitch.

During the three days of sessions and roundtables the participants will focus on global economic dynamics, Russia’s economic roadmap, new technologies, human resources as a key element of economic and social growth, and on future development.
The St. Petersburg forum will traditionally host a series of sessions of BRICS and Business 2.0 on trade and investments, a summit of energy company CEOs, business dialogue workshops, Eurasian Economic Community – India and IT business lunches.
The program also includes a session of the Shanghai Cooperation Organization, a session of the Valdai Club and a meeting of Russian and Indian business executives.
A session of the World Festival of Youth and Students will for the first time be held on the sidelines of the St. Petersburg forum in the form of panel sessions, roundtable meetings, business lunches and televised debates.
President Vladimir Putin will traditionally address the participants during a plenary meeting.

According to the forum’s organizers, there will be more people taking part in this year’s SPIEF forum than in 2016 as more than 12,000 participants from over 130 countries, including 230 foreign company CEOs, 650 Russian business executives and the heads of 76 Russian regions are expected to take part.
The St. Petersburg International Economic Forum is a unique event in the world of business and economics. It provides a platform for global leaders to engage with their peers in finding solutions to the most pressing issues affecting the world today.
SPIEF has been held since 1997, and since 2006, it has been held under the auspices of the President of the Russian Federation, who has also attended each event.
Over the past 20 years, the forum has become a leading global platform for representatives of the business community to meet and discuss the key economic issues facing Russia, emerging markets, and the world as a whole.
The St. Petersburg International Economic Forum 2016 was attended by over 12,000 participants from 133 countries, including heads of state and government from emerging economies, heads of major corporations, and the world’s leading experts in the fields of science, the media, and civil society.

The SPEIF is a very good venue for positive interaction between Eurasian interests because of the shared respect and willingness to work peacefully and cooperatively. as opposed to the colliding interests that could be seen in other fora like Davos, APEC, and even G7.
As is customary in the said forum, Putin answered all nagging geopolitical questions of the day from the Western press. But just like last year, Putin smashed the media to the floor…

Are all of these just for a show?
In some measure, it is. But for these leaders, they just want what’s equitable for their people within the prevailing system we have, and the One Belt, One Road economic program is how far this system goes. Beyond it, is up to us.
So,  we really cannot have the change we  want just with our continued reliance on these leaders, good or bad. We cannot effect the change we want without really doing anything tangible for it. Not to mention the aggressive actions coming from the Bilderberg Group, which is navigating along the path of establishing a technocratic dictatorship – the full application of technology in the control of finance, cryptocurrencies, mass surveillance and police robotics.
Incidentally, just like the Bilderberg attendees, both Russia and China are also contemplating on implementing a “better Bitcoin.”