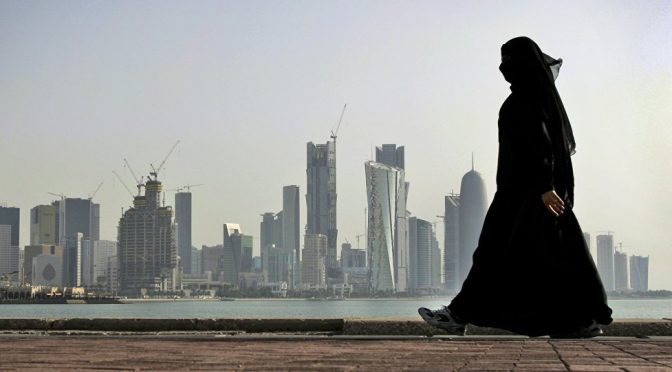 Qatar has just been booted out from the “Iran is terrorist” crowd lead by Saudi Arabia. It’s only fault is, it dares to think peace with Iran as the third way for establishing harmony in the region. Four Arab states Bahrain, Saudi Arabia, United Arab Emirates and Egypt decided to sever diplomatic ties with Qatar.

Egypt’s case is very interesting considering that, while it is well within its moral authority to protect itself from the CIA Muslim Brotherhood, which Qatar acknowledged to have funded along with others during the last Arab Spring, it is also dealing with the Saudi Arabia funded, CIA-trained Islamic State.
Here’s a good backgrounder on how the four Sunni dominated countries arrived at the decision.

Qatar-Saudi spat threatens Riyadh’s influence. But what are the Saudis really worried about?

Saudi Arabia’s move to use its influence among other Muslim countries to threaten Iran appears to be backfiring as Qatar now reveals an entirely new plan, a third way for the entire region.
Oops, Qatar did it again. It dared to think. Recently, this tiny energy-rich nation, a small island perched on the edge of the huge peninsula which mighty Saudi Arabia straddles – but almost in shouting distance of Iran – dared to do the unthinkable: threatening to challenge Riyadh’s new emboldened plan to be a leader once again in the Middle East.
Iran is calling. And its re-elected modernist leader is saying“we want peace.” But is Saudi Arabia listening?
For the second time in four years, tiny Qatar has enraged its neighbor by yearning to write its own geopolitical creed in the region, other than the one so fervently espoused by Saudi Arabia, which is ultimately designed to marginalize Iran. And Qatar’s recent move couldn’t have been timed better if it were intended to rock Saudi Arabia’s new, zealous vision it is trying to cultivate for itself in the region: as a superpower to counter Iran’s new ‘threat.’
Qatar is threatening to undermine Saudi Arabia’s big plan, assisted by Donald Trump recently when he visited Riyadh and repeated the anti-Iran mantra in front of a delegation of over 50 Muslim countries who were heralding the beginning of a new anti-terrorism coalition.
All it took was a for a GCC country to question the basis of Saudi Arabia’s demonization of Iran for Riyadh to throw a petulant tantrum, almost galvanizing the point it has a lot to learn about being the superpower it alludes to be; Saudi Arabia and its closest ally in the GCC, the United Arab Emirates, immediately banned Qatar’s TV news channel Al Jazeera from being watched.
Bizarrely, on the same day Egypt, perhaps inspired by the Saudi move, also went ahead with its own ban of Al Jazeera plus 20 other websites but more for reasons linked to how Qatar and others report on the Muslim Brotherhood and not because of Iran.
But the churlish reaction by the Saudis is more serious than it appears, as although the original statements from Qatar have since been attributed to a rogue hacker, the Saudis aren’t buying it.
For the Saudis, it’s more than just teaching its neighbor a lesson. There’s a lot at stake as central to Riyadh’s blueprint is to muster enough anti-Iran support from all the big players in the region, that Saudi Arabia can pull off a trick of the light: to dazzle Iran with its menacing influence from all the big guns.

Qatar might just scupper the plan and, along with Egypt and Turkey, start a discussion which offers a third way toward Iran from its mostly Sunni Arab neighbors: one of pragmatism toward a traditional foe.

Initially, Qatar’s Emir, Sheikh Tamim bin Hamad al-Thani, was quoted in state media “attacking US foreign policy, praising Iran and vowing to withdraw its diplomatic representation from several Middle Eastern countries, including Saudi Arabia,” according to Newsweek.
Astonishingly, as if deliberately planned to drop a bombshell on Saudi Arabia, Al-Thani said relations with Israel were “good,” and that Iran—the main rival to Saudi Arabia in the region — was a “stability guarantor” in the Middle East.
The row could have ended there, but the Saudi reaction appears to be a triumph of self-defeat. Since the initial statements on May 24, the Emir of Qatar telephoned Iran’s president on the 27th and asked for “better relations” with Iran, instructing his officials to work more closely with Iranian counterparts. If that wasn’t salt in the wound for Riyadh, then the stern request from Iran two days after that to back off from meddling in the affairs of Qatar must have surely done the job.
It’s not the first time the Qataris have shown that they crave their own foreign policy in the region and have their own ideas, which threaten the traditional set up of Saudi Arabia being Big Brother which the other Gulf States follow on geopolitics.
Three years ago, Saudi Arabia led the charge, joined by UAE and Bahrain, to withdraw their ambassadors from Qatar over its concerns about its support for the Muslim Brotherhood in Egypt.
The row though was a minor dispute compared to what Qatar is threatening to do now, which is set an example for others to go rogue. Qatar has huge ambitions, yet despite having a big voice in the region, is still thought by western analysts as still “only having a small stick.”
The real problem for the Saudis is Qatar’s influence both in the region and the world. Despite being tiny, the clout is holds via its TV news outlet Al Jazeera, gives it a powerful mouthpiece to generate debate. Other countries such as Turkey – which also wants better relations with Iran – or Egypt which is eying Moscow for a new, better relationship will no doubt contribute to the idea of scrapping the Saudi plan altogether and looking at a more intelligent approach toward Iran, ultimately defusing tensions completely in the region.
Egypt also stands out as a recalcitrant supporter at best of Saudi Arabia as it refuses to join the 41 nation ‘Muslim Nato.’ Does President Sisi suspect that the new group will be used to intimidate Iran rather than hunt down ISIL and its affiliates in Africa and Asia?
Egypt like Qatar and Turkey represent a group of important players who don’t sign up to the Saudi view on Iran. They represent a third way toward peace in the region.
Of course, for Saudi Arabia to think this way would mean an admission that the new, inexperienced government has got it all wrong and really should plow the $300 billion it has set aside for US-made weapons into its economy, infrastructure, healthcare and getting its economy less oil dependent. But no one is expecting such a move. The House of Saud is behaving like a rich man who can’t accept he’s bought a fake painting; indeed, the larger the amount the new owner has paid for it, the less inclined he is to admit it is fake in the first place.

Qataris asking “Do we need Iran as an enemy?”

It’s an entirely reasonable question. But reasoning with Saudis is difficult in a country which discourages free thinking and has no real fourth estate to speak of at all. Saudi Arabia has a terribly long way to go before it can call itself a modern Arab country, despite an initiative from its new deputy crown prince. Constructive criticism from its neighbors seems hard to imagine in a country where a Saudi stand-up comic struggles to explain to government officials “what the concept of someone standing on stage and making jokes” was. “It was like literally Chinese to them” says Yaser Bakr in a recent article in the Washington Post.
But there are other reasons why the Qataris vex the Saudis so easily.
They are also less likely to accept that they don’t have the muscle that Qatar has because of Al Jazeera. The Saudi media is painfully monolithic and blinkered, like its paymasters, and struggles to look over the garden fence at its neighbors, let alone consider their viewpoints. Al Arabiya, Saudi’s Arab-language TV network cannot be compared to Al Jazeera, for example as even its English language website mirrors the painfully blinkered view that Riyadh has of the region and its own importance.
Saudi Arabia is blinded by its own dogma and struggles to think beyond its own delusional narrative at the best of times. It would do well to look at Al Jazeera’s success and see if it cannot replicate the same and embrace some of the tenets of journalism that Doha does – aided by an army of ex-BBC journalists who flocked to it when it began – rather than stick to the spoon feeding journalists of its own state-owned outlets with the press release fodder which repeats that Iran is a regional “threat” and Hezbollah are “terrorists.”
Never though do these same organs actually substantiate the claims; Iran’s support of Assad in Syria is nothing remarkable and the Houthi rebellion which started in the same year is largely because of the Saudi-led elite’s refusal to include this group in the political process, rather than Iran planning to overthrow the entire country.
Al Jazeera, of course, has its agenda, but it is at least capable of listening to others’ views. Saudi Arabia is still indulging itself with its twilight glory, rather like Britain in the 1950s clinging on to delusions of empire, and has a long way to go in being a true superpower if it can be so angered by Qatar’s alternative views on Iran. The thumb-sucking and tantrums need to stop as banning Al Jazeera merely shows the whole world that its own logic is erroneous and out of touch with the realities which most Arabs have to deal with each day in the Middle East.
Riyadh needs to grow up and at least behave in a mature manner befitting of a regional power and listen to Qatar and engage in intelligent debate. The only real “threat” is ignorance, stubbornness and a woefully unrealistic view that Saudi Arabia has of itself. If it could at least learn to listen to Qatar and others, anything is possible. Hell, peace could even break out in the Middle East, although this would be a major setback to Trump’s defense procurement plans here.

The decision of the four Arab countries falls within the Trump ambition of isolating Iran.

For all of these Middle Eastern warlords, trust is a worn out commodity, and self-preservation is the only thing that matters. This deep mistrust within the Muslim capitals is aphrodisiac to the Western desires in the region.
All Qataris need to get out from those four countries in 2 days.
Qatar’s total population was 2.6 million: 313,000 Qatari citizens and 2.3 million expatriates.

4 thoughts on “Why Qatar is thrown out from Middle East Terror, Inc.?”