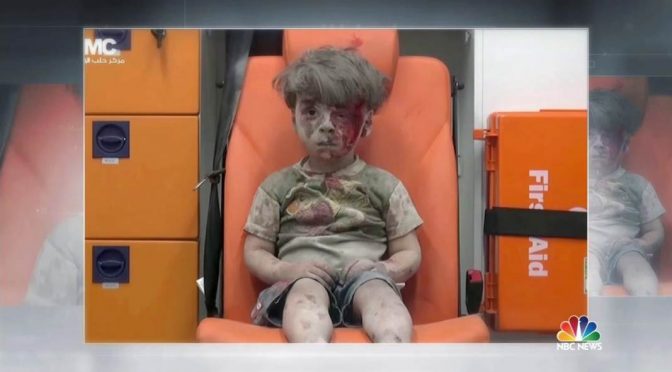 The mainstream media attempted to bribe this boy’s father with money and a facilitated immigration to the West for their pro-ISIS propaganda, but failed. His father has had to cut the boy’s hair just so the media won’t be able to recognize and exploit him again.

https://www.youtube.com/watch?v=7rE0emXxJTo
It must be understood that when this happened, first aid was purposely given only after the boy’s interview by the mainstream media, you know, to capture the “Assad is evil” drama on his face.
The mainstream media are deeply alarmed at the downward trend of their viewership, and they could not hide their frustrations anymore.
Now, CNN is desperately luring the audience through hard selling.

You bet they do "CNN explains Qatar siege like no one else" 😂😂😂 pic.twitter.com/CSrNmLBsJ3

This is also happening in the Philippines.
On June 3, the media department of the Duterte administration launched another aggressive campaign to correct the fake news coming from the local mainstream media.


The above podcast is anchored by the most popular lady blogger in the country, Mocha Uson, and the PCOO Secretary, Martin Andanar, himself.
As expected, this podcast solicited a quick condemnation from the perennial fact twister, Omidyar funded, pro-West Rappler.

It stokes the flames of a highly divisive issue like martial law. It also empowers trolls, poisons the well and lowers our collective IQ and EQ.
We don’t need videos from the government media arm mustering support for martial law, especially ungrammatical, cringe-inducing endeavors like this that insult animators and viewers’ intelligence alike.
We don’t need fake photos that show Vietnam combatants passed off as Philippine soldiers from the Philippine News Agency. We don’t need fake photos showing Honduras police instead of the Philippine military from newly minted communications assistant secretary Mocha Uson.
We don’t need fake news from the weaponized propaganda machine that media watchdog Center for Media Freedom and Responsibility says has an “all too tight connection to the President’s own communication team.”

Mocha Uson, a staunch supporter of Duterte even when he was still a candidate, has more social media followers than Rappler, even when the latter is paying for some CEO optimizers and FB ads to increase its social media metrics.
Mocha has been assisting the overseas Filipino workers [OFWs] raise their concerns directly to the government, at no cost. This prompted Duterte to appoint Mocha to the Presidential Communications Operations Office [PCOO], as undersecretary, prompting even more condemnation from the competition.
It’s very clear that the happy days in the mainstream media are over. It cannot dictate how the people use what’s in their skull anymore. More than that, the internet has allowed the individual to voice his own Truth out in the open, so that every lie is exposed as it is and as it happens.
The flow of information has now been decentralized and the future, we’ll it’s here in front of us for the taking.
Together, we are destroying the regime change and the war propaganda machine for good.