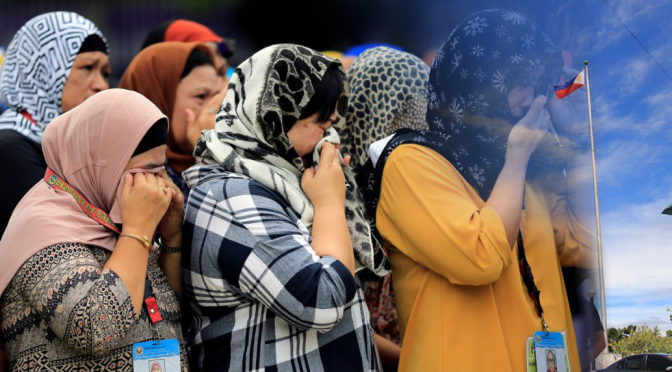 Emotions ran high as the Philippine flag was raised to celebrate the country’s 119th anniversary of Independence Day hours ago, while fierce gunfights and bombings could still be heard as near as 300 meters away from the city hall.
https://www.youtube.com/watch?v=4l907-slhq4

Independence Day ceremony at the Capitol in Marawi City has started in the middle of an airstrike pic.twitter.com/DwWNnwuGOi

On Friday, 13 Marines added themselves to the list of casualties now standing at 58 soldiers and police. 21 civilians have also been confirmed killed by the Maute group, which has lost 138 members, including some members of the Maute clan.

Displaced residents from Marawi are estimated to have reached 240,000 already. They are either living in their relatives’ home in the nearby cities of Iligan, Cagayan de Oro, and Davao, or in government designated evacuation centers.
We applaud the bravery of the Muslims, and Christians alike, in saving more lives in spite of the sniper fires lodged at them as they scour the rubbles for more survivors.


Both parents of the Maute brothers are already in the custody of the government. Both are in charge of the financial aspect of the entire terror enterprise from the very start.
Meanwhile, Duterte skipped the Independence Day rites in Manila after he was informed that the United States started providing “technical assistance” to the troops, without his prior knowledge. US-trained [read: brainwashed] elements of the military are to be the ones facilitating the entry of the US intervention.
But the WesMinCom commanders are confirming that no US equipment was used during the entire operation for its “incompatibility” and limited only to “evaluation” of the training previously given.
https://youtu.be/9CegDFrtPaw?t=9m36s
In short, any claim of “technical and other assistance” are purely US propaganda.
It must be remembered that Duterte’s state visit to Russia was purposely to obtain advanced military equipment to quell what was to be an impending onslaught of terror in the country. Events, as we already know, have caught up with him, and he was forced to cut his visit short to attend to the Marawi siege personally.
The present state of the Philippine military is a reminder that its alliance with the United States military has been a one sided affair, as the latter enjoys the cheapest real estate available to project its power in the region, while its host has been left with dilapidated, and second hand war materiel since its supposed granting of independence in 1946.
It is this fact which drives Duterte to pursue an independent foreign policy and sought the cooperation of China and Russia.

Russia and the Philippines have signed almost a dozen deals, including a defense and military cooperation agreement, days after Rodrigo Duterte cut short his Moscow visit to urgently tackle the ongoing terrorist crisis in the country’s south.

Overall, Moscow and Manila signed 11 documents which had been prepared for the Philippines president’s visit to Russia.
“These include a defense cooperation agreement, memorandums on cooperation in nuclear energy, trade, investment, industry, transport, culture, and arts, as well as an action program for cooperation in tourism and a plan of consultations between our foreign ministries,” Foreign Minister Sergey Lavrov said in talks with Philippine Secretary of Foreign Affairs, Alan Peter Cayetano.

As to the fate of the ISIS-Maute terrorists, they are now without the middle ranking leaders and are in tactical disarray. The military hierarchy is also noticing that, in the last few days, more militants were entering the city from the countryside to the aid of their cornered comrades in terror. This could only mean that “Amir of Asia” Isnilon Hapilon is still inside Marawi.
It is estimated that 50 civilians out of 200 are still being used as human shield, aside from the hundreds of civilians still trapped in the city.