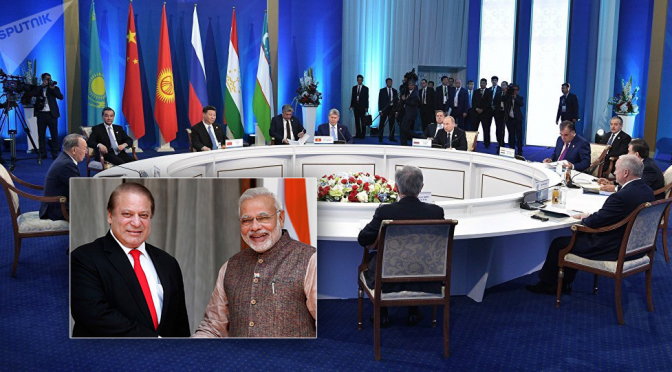 Behind the preferred headliners of the mainstream media, multiple Eurasia-based geopolitical organizations continue to strengthen themselves away from Western hegemonic influence.
These organizations are aiming for constructive collaboration that capitalizes on shared long term goals while respecting the unique culture of each member countries.
This means that no country can impose its own will on the group, or any of its members.
With the capitulation of Brazil to the Wall Street thugs, the remaining members of the BRICS bloc have gravitated more towards the Chinese-led Shanghai Cooperation Organization, since the early part of 2016.

What is Shanghai Cooperation Organization?

The Shanghai Cooperation Organization is a political, military and economic alliance comprising Russia, China, Kazakhstan, Kyrgyzstan, Tajikistan and Uzbekistan.
The list of countries that applied for SCO membership includes Pakistan, India and Iran. Belarus, Mongolia, Iran, Afghanistan, India and Pakistan hold observer status in the organization, while Azerbaijan, Cambodia, Armenia, Nepal, Turkey and Sri Lanka hold status of dialogue partners.
The SCO was founded by the leaders of the six member states in Shanghai on June 15, 2001, but the history of organization dates back to 1996, when Russian, Chinese, Kazakh, Kyrgyz and Tajik leaders gathered in Shanghai and signed the Treaty on Deepening Military Trust in Border Regions. A year later, the same leaders in Moscow signed the Treaty on the Reduction of Military Forces in Border Regions, and these two documents facilitated cooperation between the countries.
In June 2002, SCO leaders signed the SCO Charter at a St. Petersburg summit in Russia, which came into force on September 19, 2003. The Charter was a fundamental statutory document determining the organization’s purposes and principles, as well as its structure and principal areas of activity.
The SCO’s main goals include strengthening mutual trust and good-neighbor relations among members, encouraging effective cooperation among members in the fields of politics, economy and trade, science, technology and culture, as well as in education, energy, transport, tourism and environmental protection, security and stability in the region, and the establishment of a fair, democratic and rational international political and economic understanding.
The total combined area of the SCO member states amounts to 30.2 million square kilometers, spanning three-fifths of Eurasia, and comprising 1.5 billion people.
SCO activity acquired a broad economic dimension in September 2003, when members signed a 20-year Program of Multilateral Trade and Economic Cooperation. The program set a long-term goal of establishing a free trade zone within the SCO and a short-term goal of providing a favorable environment for trade and investment.
In 2006, the alliance announced its plans to combat international drug trafficking, seen as a financial pillar of the global terrorism. Effective joint counteraction against global threats became a key issue in the organization’s agenda.
The Treaty on Long-Term Good-Neighborliness, Friendship and Cooperation, signed in August 2007 in Bishkek, Kyrgyzstan, became a firm step toward strengthening the association’s legal framework.
The organization committed itself to stabilizing Afghanistan which has been engulfed in a long-lasting military conflict.
The Council of Heads of State (CHS) is the SCO’s top decision-making body and meets once a year, making key decisions on matters of the organization’s activity.
The SCO Council of Heads of Government (CHG) also meets once a year to discuss multilateral cooperation strategy and priorities and address current cooperation issues. It also approves the organization’s annual budget.
In addition to CHS and CHG meetings, there is also a mechanism for arranging meetings on the parliamentary level, security council secretaries, ministers of foreign affairs, defense, emergency situations, economics, transportation, culture, education and healthcare, as well as meetings of heads of law enforcement agencies, chairmen of supreme and arbitration courts and prosecutors general.
The major economic bodies of the organization are the SCO Business Council, the SCO Interbank Consortium, and the Council of National Coordinators (CNC) in charge of management interaction within the SCO.
The only two permanent bodies of the organization are the Secretariat in Beijing, which is supervised by the secretary-general, and the Executive Committee of the Regional Anti-Terrorist Structure (RATS) in Tashkent, Uzbekistan.
SCO member states chair the organization through a rotating annual presidency, completing their term with a summit on the territory of a presiding state.
The secretary-general and the director of the Executive Committee are appointed by the CHS for three years. The SCO’s official and working languages are Russian and Chinese…

The Chinese-led SCO is being complemented by the Russian-led Eurasian Economic Union [EAEU], and the ASEAN bloc. All of these three geopolitical organizations will find commonality in the much larger endeavor that is being managed through the One Belt, One Road OBOR economic project which sought to revive the spirit of the ancient Silk Road that was crisscrossing Eurasia thousands of years ago.
These non-Western organizations are seeking to improve the current structure and behavior of the United Nations, which started with the election of the Secretary-General António Guterres.
While it sought to cooperatively deal with terrorism [read: Khazarian Mafia], its combined military budget does not surpass the singular military budget of $600 billion of the United States, which means that they are not scheming their own peoples money solely for the benefit of the military industrial complex only. Yet, still providing the needed security, they collectively desire.
In fact, in the case of Russia alone, it possesses the most advanced air force among the superpowers to date. Both China and Russia are also said to have perfected the swarm technology to overwhelm their adversaries. This is exactly the basis why Putin warned the West that “no one will survive” if the next largest kinetic war does happen.
Both India and Iran are also developing their own versions of the Russian military technologies, while Turkey continues to court for S400 missile defense from Russia, and may have its wish granted in the months ahead. This and the Chinese collaboration has helped to keep Russia afloat amidst the extended economic and diplomatic sanctions by the West.

This year’s SCO summit celebrated the almost impossible entry and acceptance of two rivals, India and Pakistan. Both countries have a combined population of 1.5 billion, effectively doubling the total SCO population to 3 billion!
“The incorporation of India and Pakistan is the brightest moment of the recent summit,” Jia Lieying, an expert at the School of International Relations at Beijing Language and Culture University emphasized.

“Their accession will provide more opportunities for cooperation within the SCO framework, and it is especially worth noting that the expansion will facilitate the improvement of Indo-Pakistani and Sino-Indian relations. These states will be able to resolve the existing contradictions on the new platform. This will become a positive example for other regional organizations,” Jia stressed.

India’s entry into the SCO almost did not happen considering its existing spat with Pakistan, that is already a happy recipient of Chinese funded Belt and Road Initiative BRI infrastructures traversing the hotspot Kashmir province, prompting it to boycott the recent OBOR summit in Beijing.
Also, the Deep State has also sent its terror operatives to kidnap and murder two Chinese teachers in Balochistan, purposely to ruin the “all-weather” China-PAK relationship [here], prior to the Astana Summit.

“Today, new full members join the Shanghai Cooperation Organization…. The expansion of the SCO will undoubtedly contribute to ensuring that it will become more powerful and influential in the political, economic and humanitarian spheres,” Russian President Vladimir Putin said at the SCO meeting in Astana on the 8th of June.

As a gesture of goodwill to its rival, India released 11 civilian Pakistani prisoners who had completed their sentence on Monday. The prisoners went to Pakistan via the Attari-Wagah border point.

There were already previous releases of prisoners, and India” is optimistic that Pakistan will also release Indian prisoners in response. According to New Delhi, there are 132 Indian prisoners lodged in various prisons in Pakistan. Up to 57 of those Indian nationals have completed their sentence already.
The move is likely to thaw relations between the two neighboring countries which have been on a warpath ever since the escalation of violence in the state of Jammu and Kashmir.”

Bringing together the largest Asian economies and military organizations ensures the protection of Asian resources against outsiders’ exploitation.
The establishment of its own global banks [3 as of last count], resource-denominated financial system, own credit rating agencies, own version of the SWIFT intra-bank exchange infrastructure, gold bullion exchange platforms, endemic energy resources, and the above very active organizations comprise a formidable force that will surely institutionalize a multipolar world.
That is how the Old Men within the once dreaded Khazarian Mafia will be completely defeated before they breathe their last. However, this does not mean that the slavery system will cease operating in the West.

But this will open up a great opportunity for the Western population to easily crush the pyramid of cartels, that men of exceptional intellect wasted their faculties on, if they so desire.
One thing is certain, though:
Unlike the other side, Asia’s rise won’t occur over the dead bodies of the people in the West.