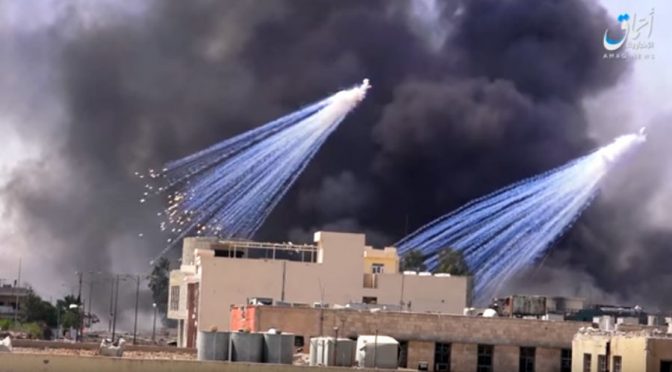 They’ve been denying this for weeks, i.e. that they’ve been killing hundreds of civilians using highly illegal munitions, in the City of Mosul, Iraq and Raqqa City, Syria. But a New Zealand general broke his silence and made the first admission to the war crime.

Published time: 14 Jun, 2017 11:00
A New Zealand general has confirmed that the US-led coalition fighting in Mosul has used munitions loaded with white phosphorus. It comes amid mounting criticism over the use of the multipurpose weapon, which can be extremely dangerous to civilians.
Over the past few weeks an increasing number of claims have pointed to the use of white phosphorus munitions by the US-led coalition in Mosul, Iraq and Raqqa, Syria – the two strongholds of the terrorist group Islamic State (IS, formerly ISIS/ISIL). The use of the weapons in Mosul was confirmed by New Zealand’s Brig. Gen. Hugh McAslan.
“We have utilized white phosphorous to screen areas within west Mosul to get civilians out safely,” he told the US broadcaster NRP, in what appears to be the first confirmation of its kind. Previously the coalition reported using white phosphorous munitions in rural areas of Iraq, but not in densely populated cities.

US-led coalition use of white phosphorus in Syria & Iraq raises serious questions about the protection of civilians https://t.co/QqgHnCbZyI pic.twitter.com/v33z0jPSwG

The confirmation comes as Human Rights Watch (HRW) criticized the coalition on Wednesday for deploying the controversial type of munitions in the fight against IS.
“No matter how white phosphorus is used, it poses a high risk of horrific and long-lasting harm in crowded cities like Raqqa and Mosul and any other areas with concentrations of civilians,” said Steve Goose, arms director at HRW.
“US-led forces should take all feasible precautions to minimize civilian harm when using white phosphorus in Iraq and Syria.”
White phosphorus burns when it comes into contact with oxygen, producing high-temperature heat and characteristic white smoke. Munitions with the chemical can be used as incendiary weapons, to lay down smoke screens or as signals.
While deploying incendiary weapons against residential areas is banned under Protocol III of the Convention on Conventional Weapons (CCW), the two other uses are not, which allows some nations, including the US, to keep such munitions in their arsenal.
Rights groups are critical of using such a loophole, saying that white phosphorus remains very dangerous even when not deliberately used to start fires. Submunitions can ignite days after deployment and remain a hazard for a city. Injuries caused by the chemical can burn to the bone and are prone to reigniting, if a piece of the phosphorous remaining in the wound is exposed to air when a dressing is changed.
“Horrific civilian harm from previous use of white phosphorus has generated public outrage and this latest use of white phosphorus underscores the urgent need for states to strengthen international law relating to incendiary weapons,” HRW’s Goose said.
Earlier, footage of several alleged instances of the use of white phosphorous munitions in Mosul and Raqqa was published online. One incident appears to have happened on June 8 in the Syrian city, days after the US-supported SDF militia announced that it had begun a siege of the IS stronghold. There were subsequent reports of the use of such munitions on the next day.
There is also footage of what appears to be white phosphorus deployed by artillery, reportedly shot in western Mosul on June 3. The Iraqi Security Forces later stated that the deployment was meant to provide cover for civilians trying to flee the IS-held part of the city.

Where are the bleeding hearts of the US / EU governments and media?
War crimes can only be covered up with more war crimes. The story of Raqqa must never be known to the world. Stories of child/women trafficking, and organ harvesting must never come out.
Potential witnesses must be eliminated before the Daesh ISIS terrorists, labeled conveniently in the mainstream media as “moderate rebels,” transform themselves as the new citizens of Raqqa, under the control of the US military.