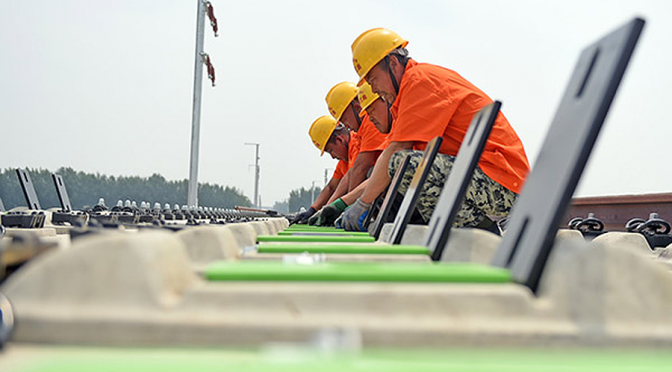 The US military doesn’t want any interruption to its Raqqa and Deir Ezzor annexation efforts, that it is more than ready to shoot down Syrian planes flying above Syrian territories to accomplish this. The US uniformed warlords, though, are profoundly wrong that Russia will just sit idly by.
Now, the Russian MoD protocol is elevated, and all US aircrafts are considered legitimate targets by a battery of S-400 air-to-air missile defense systems already in Syria, if any of them decides to take off.
Yet, while the US Corporate Deep State is engaged in daylight robbery in the oil-rich Levant, China continues to put her cash where her mouth is, without minding the internal affairs of the recipient country.

China Daily |13:13, June 20, 2017
New high-speed line to connect Yekaterinburg, Chelyabinsk.
China Railway Group Ltd, an infrastructure construction company, will build a high-speed railway in Russia connecting the country’s third-largest city Yekaterinburg with Chelyabinsk, as the Chinese company’s overseas business keeps expanding.
The project will involve a total investment of $2.5 billion, according to a memorandum of understanding signed between the Chinese company and Ural Highway during the Fourth China-Russia Exposition held recently in the northeastern Chinese city of Harbin.
The train is expected to run at a speed of up to 250 kilometers per hour, according to Russian media outlet Sputnik.
The high-speed rail link is expected to cut the current journey time between two cities to approximately one hour and 10 minutes from five hours, according to China Railway Group Ltd.
“It is a promising project with huge potential. We believe it will boost the region’s economic development, and benefit local people after its completion,” said Zhang Xian, vice-president of the company.
“The experience of the Moscow-Kazan railway positions us well in the industry. We are ready to make full use of our cutting-edge technology in this project.”
The high-speed rail link has great potential, as it will be part of the high-speed transit corridor passing through Berlin, Moscow, Astana and Beijing, Boris Dubrovskiy, governor of Russia’s Chelyabinsk region, was quoted as saying by Sputnik.
In April, China’s first overseas high-speed rail project was launched in Indonesia. It was the first time China allowed a State-owned company to get fully involved in an overseas project in terms of design and construction, according to the National Development and Reform Commission, the country’s top economic regulator.
Bao Rongfu, a transportation analyst with Nanjing-based Huatai Securities Co Ltd, said China Railway Group’s overseas orders are expected to “sustain rapid growth”, as the Belt and Road Initiative advances.
In 2016, the company signed overseas contracts worth a record 102.5 billion yuan ($15.04 billion), up 49.6 percent year-on-year, according to its annual report.
In the first quarter this year, it reported that newly signed overseas contracts reached 15.58 billion yuan, up 131.8 percent from the same period last year. During the same period, its net profits increased 15.32 percent year-on-year to 2.62 billion yuan.

The pressing questions now are:

America today has forgotten the very principles by which the American republic was created:

Is there somebody out there that is still willing to risk life and liberty for these principles, i.e. someone with integrity and the mettle to organize a real revolutionary force, aimed and able to neutralize the fascistic infrastructure which America is now transformed into?
Or, are they satisfied only with what they can write and say on live streamed interviews?
For all that you try to endure, the world is with you, America. The rest of the world is ready to help. But it seems that you are too proud a people to even realize that you’ve already lost the republic left in your care.
Your silent consent to Trump’s continuing service to the war industry, that is inducing conflicts, and deaths, around the world even today, constitutes a gruesome reality that you, too, have blood on your hands.
Nevertheless, the offer to jointly create a post-geopolitical order still stands.

We’ve been asked from the comment section below why we are accusing the US with robbery in Syria. Here’s our reply:
For effectively acting as the ISIS Air Force in Syria, not just with the recent shooting down of the Syrian Army aircraft, but in all airstrikes against Syrian positions for the last 5 years, or so, and in the deliberate misdroppings by US Air Force of military supplies and related logistics in areas controlled by ISIS militants in Syria, vis a vis the continued Syrian oil smuggling by the terrorists, it is obvious that the US profited heavily on these efforts.
Add to that is the obvious Plan B to annex Raqqa and the oilfields of Deir ez’Zor.
So, if: US Air Force = ISIS Air Force, then: ISIS Syrian oil smuggling = US Syrian oil smuggling.
Mainstream Wikipedia says,

Arab media accused Israel of being a major buyer of oil smuggled out of the ISIL-held Syrian and Iraqi territories.[33] According to this accusation, oil is smuggled to Zakhu where Israeli and Turkish dealers would determine the price, the oil is then sent as Kurdish oil to Silopi, Turkey, and transported to Turkish ports (such as Ceyhan) and shipped to Israel.[33]

ISIL transfers oil in different ways out of its territory. Oil can be trucked to Turkey, refined there and be used in Turkey or transported to tankers at the ports of Ceyhan or Dortyol.[34] Oil may be sold to middlemen in northern Iraq who then mix it with legitimate oil that enters through one of many feeders the Kirkuk-Ceyhan pipeline.[34] At the end of the pipeline it is difficult to determine if some ISIS oil is present in the mix that is supposed to come from Kurdish fields.[34]
Another way of smuggling is the transport of oil to Jordan. Smugglers goes south through Al Anbar province towards Jordan.[8] In fact, Al Anbar known as a major smuggling hub in Iraq.[14] Sami Khalaf, an oil smuggler and former Iraqi intelligence officer under Saddam Hussein, said that: “We buy an oil tanker carrying around 26 to 28 tonnes [of oil] for $4,200. We sell it in Jordan for $15,000. Each smuggler takes around eight tankers a week.” Also, he added: “smugglers typically paid corrupt border officials $650 to pass through each checkpoint.”[14]
In January 2017 US officials indicated that revenues from oil and gas sold to President Bashar al-Assad‘s government had become the main revenue for ISIL.[35] Trucks that previously delivered oil to Turkey and Iraq had been re-directed to territory controlled by Assad.[35]

While degrading oil operations is an obvious target for military operations, the United States is reported to have refrained from using this approach out of concerns for civilian casualties and destabilizing the life of a 10 million population that depends on oil from ISIL production.[7][13][16] Also, rebel-held areas supported by the U.S. depend on ISIL oil for sustenance.[13] Further, direct hits on oil fields could lead to a natural disaster and make future use difficult.[36]

So, Syria is now buying its own oil from the Daesh smugglers who are under the full protection of the US military. That’s just from a mainstream source.
However, the bigger motivation of the Syrian invasion by the US military and proxies is to take control of the Levant Basin, which is hosting huge natural gas deposit, just like in Gaza that is now undergoing Israeli exploitation, too.

5 thoughts on “While US is Robbing Syria, China is Building High-Speed Railway in Russia & Africa”