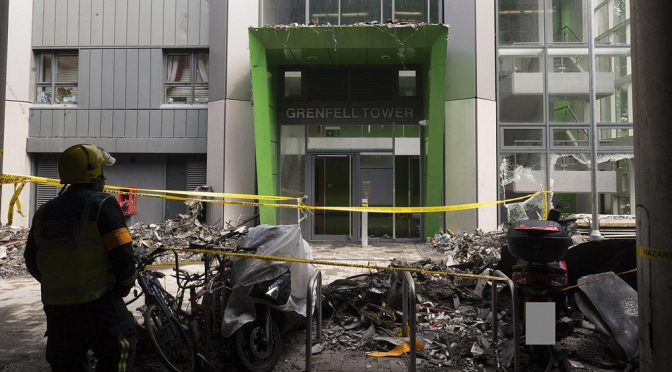 The donations are pouring in. But only a handful of takers is showing up. No one from the government have come up with the inventory of residents who died, and who survived, 7 days from the event.
If there is a total of 79 deaths, and there is an estimated 500-600 residents of the building, where are the rest?
Where are the survivors of the Grenfell Tower Fire?

It turned out that not only did the UK government is so slow at counting the dead bodies at the Grenfell Tower fire, it is also so callous in attending the few who just survived hell.

Survivors of the Grenfell Tower fire are sleeping rough in parks and cars, according to the newly elected Labour MP for Kensington.
Emma Dent Coad said the borough was in “total chaos” and suffering from “appalling” coordination nearly a week on from the blaze that is believed to have killed at least 79 people.
“People have been sleeping in cars and in parks because they don’t know where to go and they aren’t being looked after,” she told Sky News.
“The coordination is appalling. Somebody told me this morning they are still this morning running around like headless chickens – that was something somebody from the inside [said].”
She said many people were worried about accepting the Government’s payouts for fear it would impact on their benefit support.
Downing Street said residents who lost their homes would receive a down payment of at least £5,500 after outrage that residents were only being handed £10 a day.

Was there a deliberate effort to bring down the building?

The cause of the inferno was traced to the substandard plastic cladding that’s been installed to hide the “ugly building” from the view of the oligarchs living nearby.
However, the names of those who died may give us a glimpse of why they qualified for the holocaust.

Of those who died, five have so far been formally identified. The most recent is Khadija Khalloufi, 52, who lived on the 17th floor with her husband, Sabah Abdullah, a retired lecturer, who had grabbed her hand as they fled but lost his grip in the stampede to escape.
Others formally identified are: Syrian refugee and engineering student Mohammad Alhajali, 23; artist and photographer Khadija Saye, 24; Abufars Ibrahim, 39; and retired lorry driver Anthony Disson, 65.
Omar Belkadi is also among those to have died, his brother-in-law Ahmed told the Guardian. Also missing is Belkadi’s wife, Farah Hamdan, and their six-month-old daughter, Leena Belkadi.
Ahmed Belkadi said: “Omar was found with ID on his body, but they still haven’t told us where or when he was found or where he was taken to.”

UK is the home of banking, the center of world finance, and where it all began for the Rothschild Genocidal Dynasty.
At the very least, the world-preaching exceptionalists at the court of the UK monarchy could have pretended that they care for the immigrants who have successfully assimilated to the culture, and are living peacefully with them, even if the accommodation leave much to be desired.

The world is watching and they don’t blink at any diversionary false flag operations, no more.

8 thoughts on “Where are the survivors of the Grenfell Tower Fire?”