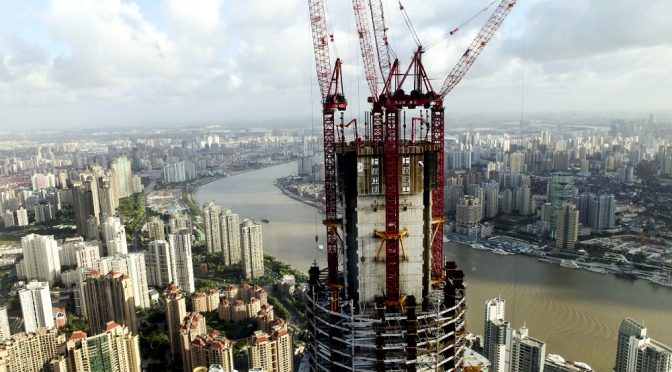 China is offering the world a better way to move forward. It is not perfect, and has nothing to do with exotic technologies yet, at least not for now. But it is far better than what the West is trying to do, even to its own population. It has achieved so much in a relatively short time, i.e. has caused the upliftment of at least 800 million for the last 3 decades.
More than that, the massive development has encouraged its people to aim as high as imagination and engineering could reach.
A Chinese company wants to build the tallest structure on the planet in just 3 months!

The world’s tallest building took five years to reach its 828-meter, 2,716-foot height, but a Chinese company wants to leave the Burj Khalifa in the dust.
China will be building skyscrapers at much faster construction time than the convention using prefabricated modules and parts.
Broad Sustainable Building, which already built a hotel in two weeks, aims to erect the new Sky City skyscraper within three months.

After overtaking the United States as the biggest construction market in 2010, China’s construction sector will more than double in size to $2.5 trillion by 2020.

Chinese infrastructure constructions, as we already know, are not just happening in China, but are spread across continents willing to work and develop with her, constructively.

In its heyday, the ancient Silk Road was Eurasia’s most important trade route, connecting two rich continents to facilitate trade and cultural exchange. Modern-day China has seen near constant economic growth. It boasts of several record figures, including the highest number of skyscrapers and the longest railroads. Five years ago, the government announced a new plan, “One Belt, One Road”, an initiative to revive the Silk Road. The strategy seeks to help China play a bigger role in global affairs through developing an infrastructure that will unite the countries of the two continents under a cohesive economic area.
Many ancient Chinese cities that were once outposts along the Silk Road, desert oases or transport hubs are now rapidly transforming themselves into megacities, so that they can, once again, service and profit from the trade route. New businesses are opening, facilitated by the development of a reliable transport system, which in turn brings greater tourist flow. Some cities are also grated the status of special economic area, offering attractive tax incentives to foreign investors.
We visit two very different cities; Lanchjou and Urumchi, united by the Silk Road’s history. Both are experiencing rapid development. We meet businessmen who tell us how it feels to watch their home towns transform into economically and politically significant conurbations and how it inspires them to aim for international markets and seek new outlets for their businesses to grow.
http://bit.ly/1MgFbVy