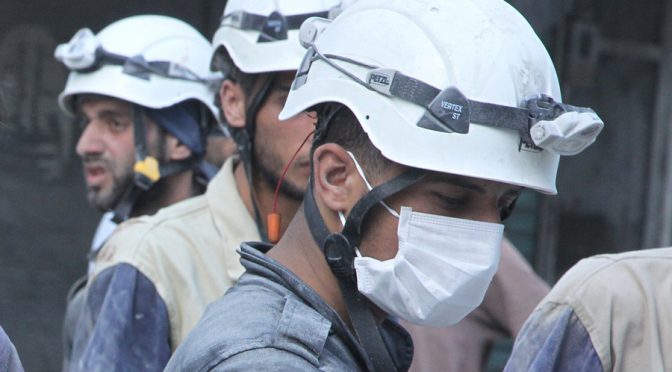 The UK-funded White Helmets, who received an Oscar award early this year, have been caught on camera helping unidentified militants trying to dispose the bodies of beheaded Syrian Army soldiers. The Syrians, in turn, consider the false humanitarian group as “camera posers, thieves, and raiders.”

Published time: 23 Jun, 2017 22:35
A member of the so-called White Helmets which has been hailed by the western media as ‘peace-bearing heroes’ has been caught on camera helping a group of unidentified militants disposing the bodies of beheaded Syrian Army soldiers.
Graphic footage posted on Twitter on June 20 shows a man wearing a T-shirt with the White Helmets logo dumping a pile of bodies, allegedly being that of Syrian Army soldiers or pro-government fighters.
The gut-wrenching footage shows that many bodies in the pile are beheaded and one militant even shows a severed head of a soldier up close on camera.

Impartial and humanitarian White Helmets participating in the beheading and throwing of Syrian soldiers bodies at a dumpster in Daraa today: pic.twitter.com/2UvEbhUu9g

“Impartial and humanitarian White Helmets [are] participating in the beheading and throwing of Syrian soldiers bodies at a dumpster in Daraa,” a caption under the video posted on Twitter reads.
Daraa is a southern Syrian province bordering Jordan where several rebel factions as well as Al-Nusra terrorist group and its affiliates are operating.
It remains unclear which militant group was shown in the video disposing of the bodies.
Following the incident, the White Helmets, officially known as the Syria Civil Defense, were quick to release a statement, in which the group’s management condemned the man shown in the video and said they fired him for violating their code of conduct.
The group acknowledged that the filmed man was indeed the member of the White Helmets but said he was “acting independently and not in his capacity as a member of SCD.”
“On 20 June 2017, a volunteer of SCD in Daraa Governorate was witnessed participating in an activity that violated the organizational principles and vision of SCD,” the statement said, adding, that the behavior of the man in question, whose name was not revealed, “constitutes a gross breach of SCD’s Code of Conduct.”
“As a result, the volunteer has been dismissed,” the statement says.

It is not the first time that the White Helmets has been caught in scandals involving their members participating in various atrocities.
In one such incident in May, footage emerged showing several members of the group’s rescue team helping to get rid of a body of a man shot dead by rebels in the town of Jasim, also in Daraa province.
The man was shot during a summary execution carried out by the rebels in front of a large crowd and recorded on camera. The video then shows volunteers from the White Helmets moving in to dispose of the body, Almasdar news website reported at that time.
In May, the White Helmets also quickly released a statement stating that the group’s volunteers “were seen to act improperly and not in accordance with the voluntary Code of Conduct for Syria Civil Defense (SCD) members.”
At that time, the issue appeared to be the fact that the group’s local team leader failed to seek “permission from his superiors before agreeing to the request” to dispose of the body. He was later dismissed.
The White Helmets have long been hailed by the mainstream western media as heroes who save lives. A Netflix documentary film praising the group as “unarmed and neutral civilian volunteers” even won an Oscar for best documentary short feature in February.
The unit has also received praise from Amnesty International, describing it as “a group of neutral, unarmed volunteers.”
However, the group has long been plagued by allegations of having ties with terrorist groups. Russia’s Foreign Ministry spokeswoman, Maria Zakharova, said in April that the White Helmets are involved in covering up terrorist’s crimes.

“The White Helmets not only feel at home on territories controlled by Al-Nusra Front and Islamic State [IS, formerly ISIS/ISIL], but also openly express positive attitudes towards them, providing them with information and even financial assistance,” she said at the time.

A Canadian journalist and rights activist, Eva Bartlett, who has traveled to Syria numerous times since the start of the war, has also questioned the authenticity of the White Helmets’ claims concerning their ‘rescue effort’ mandate.
Members of the group “purport to be rescuing civilians in eastern Aleppo and Idlib [but]… no one in eastern Aleppo has heard of them,” she said in an address to the UN in December 2016.
Vanessa Beeley, an independent researcher and journalist, told RT in October 2016 that “there is massive video and photographic testimonial evidence from inside Syria to give evidence that they are running a terrorist support group.”
She particularly pointed out that the group is “embedded entirely in terrorist-held areas whether it is predominantly Al-Nusra Front or ISIS or any of the various associated brigades of terrorists.”
The residents of Aleppo have described the group as “camera posers, thieves, and raiders,” who are only interested in releasing dramatic videos. “When they came to help the injured they stole from them,” one elderly man told RT’s war correspondent Lizzie Phelan in December 2016. “If people are wearing jewelry, they cut it off. All of them are thieves.”