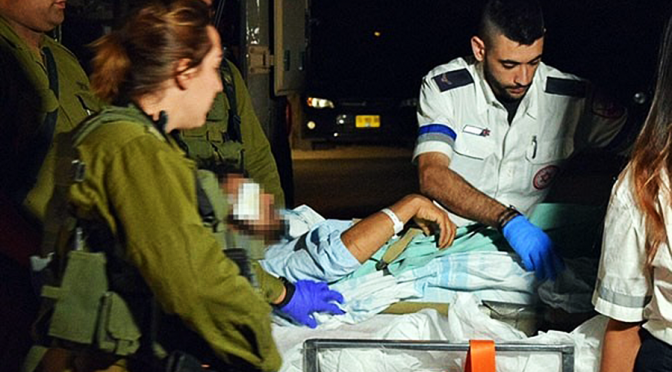 Local sources disclosed on Sunday that several terrorists, who had been wounded in the battle with the Syrian government forces in Quneitra province, have been taken to an Israeli hospital.
The sources reported that a number of injured members of Al-Nusra Front (also known as Fatah al-Sham Front or the Levant Liberation Board) have been transferred to the Israeli hospitals via al-Hamidiyeh region in Quneitra countryside.
The army troops repelled Al-Nusra Front’s offensives in the Southwestern province of Quneitra, leaving tens of terrorists dead and many more wounded. Later, the Israeli aircraft attacked the Syrian government forces’ tanks and artillery positions South-West of the war-hit country.
This is not the first time that Al-Nusra terrorists have been transferred to Israeli hospital after sustaining injuries in clashes with the army soldiers.
In September and November 2016, tens of wounded fighters of Fatah al-Sham (formerly know as the Al-Nusra) Front were transferred from Quneitra battlefields to Israeli hospitals in the occupied Golan Heights, as several Israeli ambulances entered Syria’s Southern province of Quneitra and transferred those terrorists injured in clashes with Syrian Army troops to their hospitals in the occupied part of the Golan Heights.
Also, scores of fighters of Fatah al-Sham succumbed to their injuries in Israeli hospitals and their bodies were handed over to the Takfiri terrorists in Syria’s Quneitra.
Fatah al-Sham received these bodies and transferred them to its own field-hospital in the village of Jabata al-Khashab near Quneitra city.
In October, sources disclosed that Fatah al-Sham Front dispatched its wounded members to Israeli and Jordanian Hospitals via Syria’s Southern borders.

Israeli helicopters have transported for treatment to the occupied territories six injured members of terrorist groups operating against the government in Syria, a report says.
The official Syrian news agency, SANA, quoted Israeli media on Friday that the helicopters transported the wounded the day before.
One of the injured militants was taken to a hospital in the city of Safed and the other five were transported to a medical center in Haifa.
The news comes as no surprise given the fact that the Tel Aviv regime has a long history in supporting militant groups against the government of Syrian President Bashar al-Assad over the past more than four years of turmoil in the Arab country.
Reports say Israel has set up field hospitals near the border with Syria to treat the injured militants coming in from battlefield.