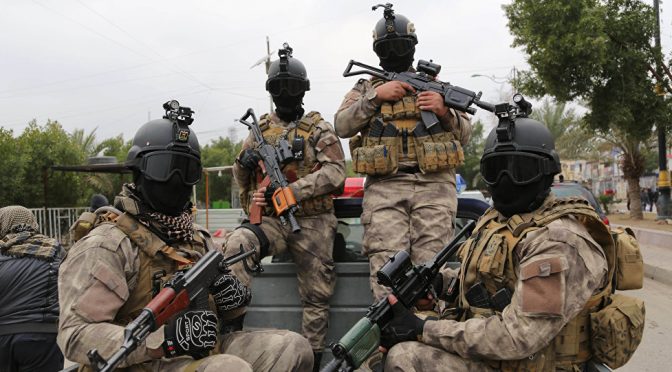 The battle for the recovery of Mosul against ISIS is winding down, but Iraq is not happy with the US assistance it is receiving, and some segments of the Iraqi forces are now contemplating on attacking the US forces that are already there in Iraq.
Here’s why…
While they are trying their best to eliminate the scourge of ISIS in Mosul, a US military aircraft was secretly transporting ISIS away from harm and into a new target, multiple Arab news outlets have reported.

Paul Antonopoulos – 21/03/2017
BEIRUT, LEBANON (11:16 A.M.) – Jafar al-Hosseini, a spokesman and senior commander of Iraq’s Kata’ib Hezbollah militia group, has said that it will target US forces after ISIS are defeated if they do not leave Iraq.
“If the US forces refrain from leaving the Iraqi territories after annihilation of the ISIL terrorist group, the Islamic resistance of Iraq will target them,” al-Hosseini told the Islamic republic news agency on Tuesday.
He then went onto highlight how the US has protected and supported ISIS.
His remarks came after a senior Popular Mobilization Units commander disclosed that the US troops have helped ISIS chief commander Abu Bakr al-Baghdadi escape the western part of the city of Mosul in Northern Iraq, Fars News reported.
“The US forces have paved the way for ISIL [ISIS] leader (Abu Bakr al-Baghdadi) to flee from Western Mosul to al-Qayravan region,” the Arabic-language al-Sumeria TV quoted Javad al-Tayebavi as saying earlier this month.
“Our intelligence unit has confirmed that al-Baghdadi is moving between al-Qayravan and al-Hazar region in Southern Mosul,” he added.
Meanwhile, Kata’ib Hezbollah created a unit with the aim of liberating the occupied Golan Heights from Israel and return its sovereignty back to Syria, as reported by Al-Masdar News.
“After recent victories (in Syria), we have established the Golan Liberation Brigade,” al-Moussavi, the Harakat Hezbollah al-Nujaba movement’s spokesman, said at a press conference, as quoted by the Tasnim News Agency.
He added that “if the Syrian government requests, we are ready to take actions to liberate Golan.”

Several weeks ago, the US-backed Kurdish forces allowed the safe passage of ISIS militants out of Raqqa, to pave the way for US occupation of the city. This is part of the Plan B partitioning of Syria, after the Russian-led armed intervention successfully removed ISIS from the city of Aleppo.
The Trump administration has recently released a statement saying that Assad is preparing to launch a chemical attack again on his own people, which would give the United States “legitimate” reasons to attack the Syrian government again.
The New York Times itself declared that,
“Several military officials were caught off guard by the statement from President Trump’s press secretary…”

He got his intel from the Israeli psychopaths, whose only objective in life is to gain more territory than they will ever need.

It didn’t matter that Americans chose Trump over Clinton. But this planned US ground invasion in Syria will certainly break the camel’s back.
Eliminating pedophiles, one at a time, doesn’t really amount to much of anything. There are thousands of them, and they needed to be eliminated en masse.

3 thoughts on “Iraqi Armed Group Will Be Targeting US Commandos Soon, Here’s why…”