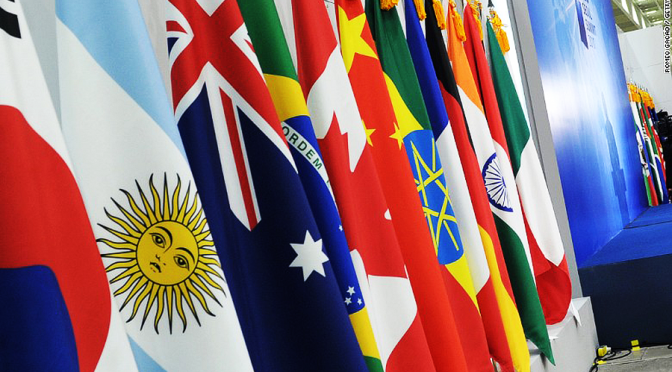 The CEOs of the 20 greatest states on the planet are gathering again to speak about how they will manage an increasingly awake and aware population.

Riot police have used water cannons to disperse a large crowd of protesters rallying in Hamburg against the upcoming G20 summit.

Footage shared on social media shows dozens of police officers in full riot gear descending on the activists. Behind the police, lines of water cannons that are being used against the protesters.

Demonstrators had been given until the start of the week to clear out and dismantle their protest camps around the city. Most protesters refused prompting police to move in.
In an effort to make the public understand the seriousness of the threat, police released footage showing a number of homemade weapons seized by authorities in Hamburg and surrounding areas in recent weeks.
“We can assume this is only a small fraction of what is still hidden in cellars and garages around Hamburg,” Jan Hieber, the head of the city’s CID said, according to the Telegraph. “This is not a question of sit-ins, but of major attacks.”
The “militant far-left” decided “to organize the biggest black bloc of all time,” Hamburg interior minister Andy Grote claimed Tuesday in an interview with the ZDF broadcaster.
“Protest camps are permitted, but not camps in which people stay overnight,” Grote said, as quoted by the Local.
The most anticipated meeting will be that one between Putin and Trump, but frankly we’re not that excited. Are you?