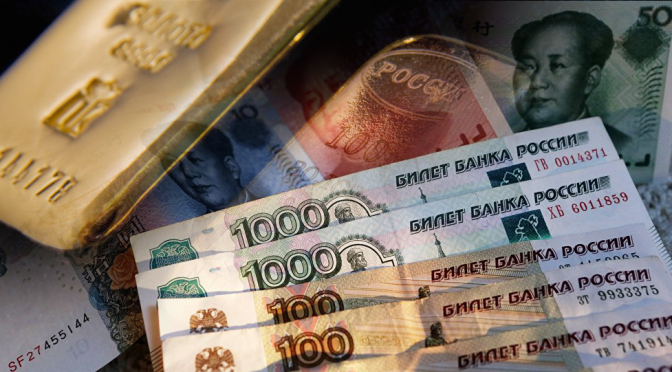 Reuters reported, a week ago, that Russia’s Sberbank has begun trading in gold at the Shanghai exchange. This is both a retaliatory move against those who continue to wage an economic war through a broad, extended economic sanction against the federation, and as a long term measure against global terrorism, aka Khazarian Mafia.

MOSCOW, July 13 (Reuters) – Russia’s biggest bank Sberbank said on Thursday its Swiss subsidiary had begun trading physical gold on the Shanghai Gold Exchange.
Sberbank was granted international membership of the Shanghai exchange in September last year and in July completed a pilot transaction with 200 kg of gold kilobars sold to local financial institutions, the bank said.
Sberbank plans to expand its presence on the Chinese precious metals market and anticipates total delivery of 5-6 tonnes of gold to China in the remaining months of 2017.
Gold bars will be delivered directly to the official importers in China as well as through the exchange, Sberbank said.
Russia’s second-largest bank VTB is also a member of the Shanghai Gold Exchange. (Reporting by Alexander Winning; editing by David Evans)

A more detailed analysis is here courtesy of Andrew Brennan.

By Andrew Brennan | Global Research, May 01, 2017 | Asia Times 27 April 2017
While the recent raft of Sino-Saudi trade agreements benefited Chinese soft power in protecting Xinjiang, and the Saudis by diversifying their economy, China’s slow intertwining with Saudi Arabia complements the Sino-Russian alliance. Primarily, its benefits could lead to a realistic threat to the petrodollar.

The Persian rival who showed the way

In 2012/2013, the US Treasury Department, under the Obama administration, initiated a raft of sanctions in an amateurish fashion against the Central Bank of Iran. As we were told, it was done to tire and bleed Iranian economic and social life enough to draw Tehran into negotiations concerning its nuclear programme. The argument of were they/weren’t they pursuing a weaponized nuclear program isn’t important; how the Iranians circumvented these sanctions is.
The sanctions were meant to be stifling, but the Iranians loosened this problematic liquidity noose by using all their banks that weren’t sanctioned, and sold rich Iranian oil to India. Of course, the Indians couldn’t pay Tehran directly. Neither could they pay bilaterally in rupees due to sanctions and infrastructure needed to trade in a bilateral currency. Instead, Iran requested that India pay in gold so India paid Turkey, the Middle East’s gold market, and Turkey gave Turkish gold to Iranian banks, which then swapped with the Central Bank of Iran.
Turkey, for its part, may soon be the gold payment intermediator across Asia, and is already nationalizing the sector with a demand for private confiscation occurring to support the Turkish economy, but this has scarcely been reported.
This clever evasion was known as the Iran-India-Turkey triangle. Iran was escaping the dominance of the US dollar and trading in real money, not a hegemonic fiat currency that was being printed hot-off-the-press all day. They were dealing in gold; not something that could be strangled through SWIFT and electrons traded on a screen easily. A simple intermediator and precious metals could break Obama’s heralded “crippling” sanctions.
Iran ideologically, as well as practically, wants nothing to do with the US dollar but rather it wants to be free of monetary pressures by the US on its domestic policies. The effectiveness of this evasion was a preview to what countries like China, Russia, and to a lesser extent India and South Korea, have all been trying to do: increase their independence from the US dollar. The Iranian gold triangle showed successful independence from US dollar reliance.

The Chinese usurpers and their yellow metal

Fast forward to March 2017; the Russian Central Bank opened its first overseas office in Beijing as an early step in phasing in a gold-backed standard of trade. This would be done by finalizing the issuance of the first federal loan bonds denominated in Chinese yuan and to allow gold imports from Russia.
The Chinese government wishes to internationalize the yuan, and conduct trade in yuan as it has been doing, and is beginning to increase trade with Russia. They’ve been taking these steps with bilateral trading, native trading systems and so on. However, when Russia and China agreed on their bilateral US$400 billion pipeline deal, China wished to, and did, pay for the pipeline with yuan treasury bonds, and then later for Russian oil in yuan.
This evasion of, and unprecedented breakaway from, the reign of the US dollar monetary system is taking many forms, but one of the most threatening is the Russians trading Chinese yuan for gold. The Russians are already taking Chinese yuan, made from the sales of their oil to China, back to the Shanghai Gold Exchange to then buy gold with yuan-denominated gold futures contracts – basically a barter system or trade.
The Chinese are hoping that by starting to assimilate the yuan futures contract for oil, facilitating the payment of oil in yuan, the hedging of which will be done in Shanghai, it will allow the yuan to be perceived as a primary currency for trading oil. The world’s top importer (China) and exporter (Russia) are taking steps to convert payments into gold. This is known. So, who would be the greatest asset to lure into trading oil for yuan? The Saudis, of course.
All the Chinese need is for the Saudis to sell China oil in exchange for yuan. If the House of Saud decides to pursue that exchange, the Gulf petro-monarchies will follow suit, and then Nigeria, and so on. This will fundamentally threaten the petrodollar.
Now the argument is that if China does this it will put a slam on Chinese exports, but China is undergoing an intentional metamorphosis from a producer and exporter to a service and consumer economy of internal products. Look to China’s technology sector, e-commerce sector, and other domestic sectors that will provide a large market for sustainable service and growth.
A second argument against this train of thought is that maybe China doesn’t want the yuan to be a world reserve currency but just have a strong currency; a gold-backed yuan currency. Having a gold trade note may not hurt Chinese exports as it transforms its economy and its future exports.
Beijing may also have thought that if Saudi Arabia is persuaded to trade in yuan or gold-backed yuan, etc, South Korea and Japan may follow suit, as both have been looking to detach from the US dollar.
China and Iran were the first to initiate bypassing the dollar, followed by Russia circumventing the SWIFT system and then India beginning to move away from the US dollar and starting bilateral trade deals. China and Japan made moves to trade directly, as did Japan with India, bypassing the dollar.
The use of alternative payment systems like gold, yuan, rupees, rubles and other monies, fiat and not, to evade the potential of sanctions and seizures of the US dollar, or its decline, are seen as favorable.
What decline?
Well, we can look at the historic East-West cycle, the baby-boom demographic in the West, the growing inequality in the wealth distribution cycle, the ratio of household debt as a percentage of disposable income, and for you history buffs, the Kondratiev wave are all peaking and are descending into a deflationary wave.
Wait, what?
Okay, all of those mentioned cycles are economic swings of wealth. Everything is pointing towards a declining West and a rising East. But we can equally blame central bankers’ quantitative easing policies of printing to prosperity. The idea is a falsity that also has only benefited the wealthier classes, and can’t beat back cyclical pressure. A shift in world monetary systems is occurring.
The Chinese economy has begun an economic restructuring and focus on domestic production and services. The Trump administration thinks weakening the US dollar will help American exports and likewise respectfully grow the US economy (or “grow” within the confines of the current monetary system). However, the overvalued dollar has subsidized the cherished “American standard of living,” and any weakening will now have detrimental effects.
The US needs to also restructure its economy to one that is based on production. It can no longer continue to run a debt-serviced economy that imports all goods it doesn’t produce. It’s unsustainable, and the continuous mistake of many. The wealth of the world is shifting eastwards.
The petrodollar is the last vestige of that “American standard of living” middle America cherishes, and if the gold trade bonds fly and yuan changes hands as the oil flows, the US is going to get a shock when Saudi Arabia likes the look of red paper as much as green, or worse yet, yellow metal, a lot of which is moving east.

Andrew Brennan is a dual Irish/American citizen who was educated in Ireland. He holds two Master of Arts degrees from the National University of Ireland, Galway. Andrew has previous experience in radio, research, and domestic television, and also currently contributes to Forbes and The Global Times. 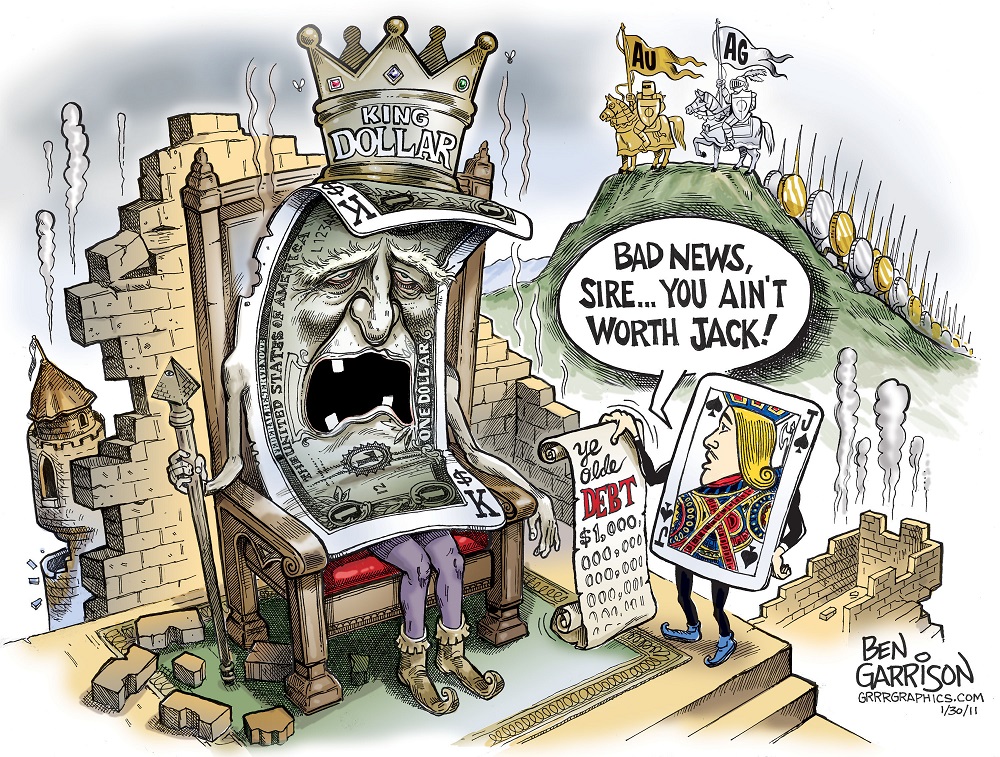