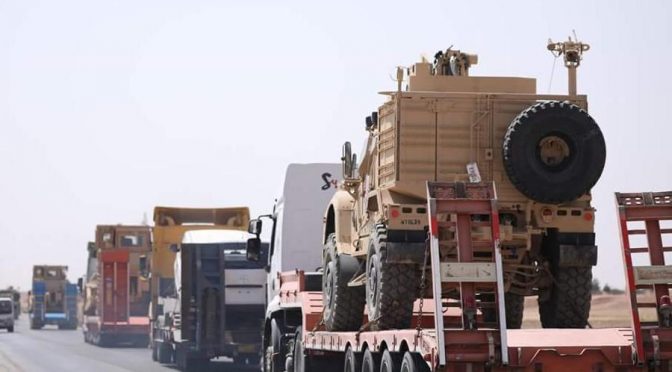 The CIA covert operation to train, armed and direct the operations of the proxy terror groups inside Syria may “have ended officially,” the open warfare to partition Syria continues.
The Syria Plan B is being augmented with the recent US delivery of Mine-Resistant Ambush Protected (MRAP) vehicles, Mine-Resistant All-Terrain Vehicles (M-ATVs) and armored bulldozers for the US-backed Syrian Democratic Forces.

“Footage has surfaced online depicting flatbed trucks laden with American armored military vehicles passing through Syria, with conflicting commentary claiming that the materiel was bound for use by either US-backed Syrian militant groups or US troops themselves fighting Daesh in the city of Raqqa.
The photos and videos were uploaded by Syrian Kurdish activists who are known affiliates of the Syrian Democratic Forces (SDF.) The vehicles included Mine-Resistant Ambush Protected (MRAP) vehicles, Mine-Resistant All Terrain Vehicles (M-ATVs) and armored bulldozers. They were mounted on the backs of flatbed trucks and were filmed passing through Qamishli, 170 miles northeast of Raqqa.”

All three vehicle types were previously mentioned in Pentagon reports as assets being supplied to SDF fighters. “Up-armored vehicles have been delivered to the SDF and [Syrian Arab Coalition] as part of our existing authorities to enable them,” a spokesperson for US operations in Syria told Task & Purpose.

U.S armaments & military vehicles being delivered to SDF via trucks toward Raqqa. pic.twitter.com/x49JUOZK8I

Specifically, these vehicles will help them contend with [Daesh’s] IED threat in their current operation, and as they move to isolate [Raqqa].” Mine-resistant vehicles are deployed against areas known to hide improvised explosive devices, which are a major danger to American soldiers riding in armored vehicles. At least half of all US casualties in Iraq and Afghanistan have been attributed to IEDs.

However, the spokesperson went on to tell Task & Purpose that MRAPs and M-ATVs were “not part of the package that is divested to the SDF.” The Military Times noted that the M-ATVs were mounted with Common Remotely Operated Weapon Station (CROWs) systems, which allow for operators to fire the M-ATV’s mounted.50 cal machine gun without exposing themselves to enemy fire. CROWS systems also weren’t provided to SDF fighters.

New pictures from #US deliveries of armoured vehicles to #PKK-affiliated #YPG that is stuck in #Raqqa fighting #ISIS. #Syria pic.twitter.com/Ys0B3QELFB

Instead, the vehicles “are for use by the Coalition to protect our forces from IEDs.” In other words, the Pentagon claims these armored vehicles are for use by Western operators, not SDF militants.
Under the Trump administration, there has been an uptick in American support for the SDF, a coalition of various militias. Since June, the SDF have besieged Raqqa, Daesh’s final stronghold in Syria. Although Daesh has mounted intense resistance, the SDF has encircled the city and is slowly but surely gaining ground. The deeper the SDF go into the city, however, the stiffer the defenses they find awaiting them.
“The SDF has reportedly encountered intensified resistance and ‘better-emplaced defenses’ over the past four weeks following initial rapid gains in districts on the outskirts of [Raqqa],” read a new report from the Institute for the Study of War.”
Although the US support for SDF operations is common knowledge, the Pentagon has been very cagey about providing details of American operations. They only directly confirmed the presence of US advisers in Raqqa five weeks into the siege, for instance.
The largest and most prominent militia among them are the Syrian Kurdish People’s Protection Units (YPG). Turkey, a nominal US ally, considers the YPG to be a terrorist group, which the US denies. The Syrian Kurds and the Turkish military have become increasingly belligerent to one another, with some exchanges of gunfire along the Syrian-Turkish border. Ankara has stated in no uncertain terms that they will never support a Kurdish state on their border.
The armored vehicles may then serve a purpose beyond helping to bring an end to the Daesh occupation. They may also be the Pentagon looking ahead to the wars of tomorrow.

The problem for Syria and Russia is,
“…the [International Socialist Organization] ISO and its cognates will leave no stone unturned in their search for an indigenous Syrian force to support that has taken up arms against Damascus, even to the point of insisting that a group worthy of support must surely exist, even if it can’t be identified.”
… In both Syria and Iraq, Kurdish fighters have used the campaign against ISIS as an opportunity to extend Kurdistan into traditionally Arab territories in which Kurds have never been in the majority.
… When PKK fighters cross the border into Turkey, they become ‘terrorists’, according to the United States and European Union, but when they cross back into Syria they are miraculously transformed into ‘guerrilla” fighters waging a war for democracy as the principal component of the Syrian Democratic Force. The reality is, however, that whether on the Turkish or Syrian side of the border, the PKK uses the same methods, pursues the same goals, and relies largely on the same personnel. The YPG is the PKK.

Washington has long wanted to oust the Arab nationalists in Syria, regarding them as “a focus of Arab nationalist struggle against an American regional presence and interests,” as Amos Ma’oz once put it. The Arab nationalists, particularly the Ba’ath Arab Socialist party, in power since 1963, represent too many things Washington deplores: socialism, Arab nationalism, anti-imperialism, and anti-Zionism. Washington denounced Hafez al-Assad, president of Syria from 1970 to 2000, as an Arab communist, and regards his son, Bashar, who succeeded him as president, as little different. Bashar, the State Department complains, hasn’t allowed the Syrian economy—based on Soviet models, its researchers say—to be integrated into the US-superintended global economy. Plus, Washington harbors grievances about Damascus’s support for Hezbollah and the Palestinian national liberation movement.
US planners decided to eliminate Asia’s Arab nationalists by invading their countries, first Iraq, in 2003, which, like Syria, was led by the Ba’ath Arab Socialists, and then Syria. However, the Pentagon soon discovered that its resources were strained by resistance to its occupations of Afghanistan and Iraq, and that an invasion of Syria was out of the question. As an alternative, Washington immediately initiated a campaign of economic warfare against Syria. That campaign, still in effect 14 years later, would eventually buckle the economy and prevent Damascus from providing education, health care and other essential services in some parts of the country. At the same time, Washington took steps to reignite the long-running holy war that Syria’s Islamists had waged on the secular state, dating to the 1960s and culminating in the bloody takeover of Hama, Syria’s fourth largest city, in 1982. Beginning in 2006, Washington worked with Syria’s Muslim Brotherhood to rekindle the Brother’s jihad against Assad’s secular government. The Brothers had two meetings at the White House, and met frequently with the State Department and National Security Council.
The outbreak of Islamist violence in March of 2011 was greeted by the PKK as an opportunity.
By 2014, the PKK had “declared three self-rule administrations, or cantons as they call them, in northern Syria: Afreen, in the northwest, near the city of Aleppo; Kobani; and Jazeera in the northeast, which encompasses Ras al-Ain and the city of Qamishli. Their goal [was] to connect all three.” [13] This would mean controlling the intervening spaces occupied by Arabs.

A Deal with Washington

At this point, the PKK decided that its political goals might best be served by striking a deal with Washington.
The State Department had “allowed for the possibility of a form of decentralization in which different groups” — the Kurds, the secular government, and the Islamist insurgents — each received some autonomy within Syria. [14] Notice the implicit assumption in this view that it is within Washington’s purview to grant autonomy within Syria, while the question of whether the country ought to decentralize, properly within the democratic ambit of Syrians themselves, is denied to the people who live and work in Syria. If we are to take seriously Ocalan’s Bookchin-inspired ideas about investing decision-making authority in the people, this anti-democratic abomination can hardly be tolerated…

So, while we agree that the Kurds need to have their land, being a small minority in Syria should not be used as pretext for dividing the country for Israel’s benefit.
Everybody must remember, especially the Kurdish community, that when the CIA was using Iraq to attack Iran, it consented to the latter’s use of nerve gas on the Kurdish village of Halabja, Foreign Policy reported in 2013. 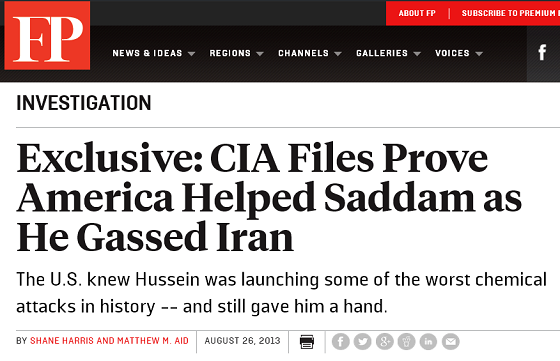 U.S. officials have long denied acquiescing to Iraqi chemical attacks, insisting that Hussein’s government never announced he was going to use the weapons. But retired Air Force Col. Rick Francona, who was a military attaché in Baghdad during the 1988 strikes, paints a different picture.
“The Iraqis never told us that they intended to use nerve gas. They didn’t have to. We already knew,” he told Foreign Policy.
… By 1988, U.S. intelligence was flowing freely to Hussein’s military. That March, Iraq launched a nerve gas attack on the Kurdish village of Halabja in northern Iraq.

7 thoughts on “American Armored Vehicles Are Pouring into Raqqa, But Who Are They For?”