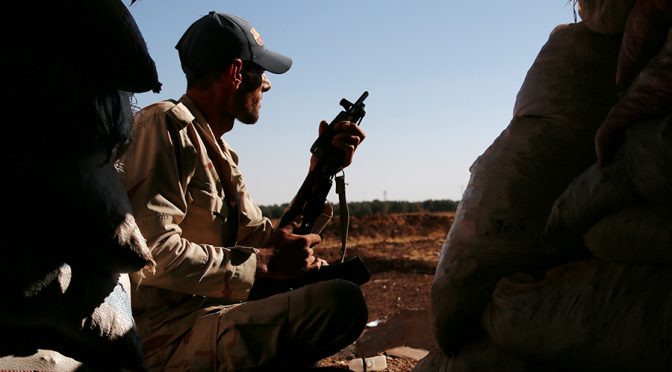 Timber Sycamore is a classified weapons supply and training program run by the United States Central Intelligence Agency (CIA) and supported by various Arab intelligence services, most notably that of Saudi Arabia, in order to topple Syrian President Bashar al-Assad.
The whole operation was exposed in details when 3 US green berets were murdered by a Jordanian soldier named Marik al-Tuwayha, and a US court martial was subsequently convened, and separate US Army investigations were conducted. Download the US Army 15-6 Investigation here.
The names of these green berets were:

They were peppered with bullets for six minutes by Marik while the convoy was stopped in front of the King Faisal Air Base, last November 2016. All three were part of the covert CIA train and arm program “Timber Sycamore”.
That’s the consequence when you are exposed as supporting multiple sides of the conflict. The best option right now is to quit.

Published time: 21 Jul, 2017 20:49
A US army general has confirmed that Washington has decided to put an end to a CIA scheme to equip and train certain rebel groups fighting the government of Syrian President Bashar Assad. He insisted the policy shift had nothing to do with improving relations with Russia.
US Army General Raymond Thomas, head of the Special Operations Command, said the decision was “based on assessment of the program.”
“At least from what I know about that program and the decision to end it, (it was) absolutely not a sop to the Russians,” Thomas said at the Aspen Security Forum in Colorado on Friday.

Unnamed government sources told various media outlets last week that the decision to end the program had been partly due to the Trump administration wanting a better relationship with Russia.
The decision to terminate the program was reportedly taken by Trump in consultation with CIA Director Mike Pompeo and national security adviser H.R. McMaster ahead of his meeting with Russia’s President Vladimir Putin in Hamburg earlier this month.
https://twitter.com/AspenSecurity/status/888480023480418305

At most, for the US government, deaths involving Americans are the only grave collateral damage that counts. Even then, the government’s foreign policies which sent these three soldiers to their early demise will never be officially acknowledged.

Deaths and misery incurred by Syrians, Iraqis, Libyans, Vietnamese, Filipinos, and all others, were of less import.
This attitude needs to go. All ongoing regime change operations need to stop. The Nazi-controlled CIA needs to rid of generational pests.
We are tired of wars which have nothing to do with planetary progress and human evolution.