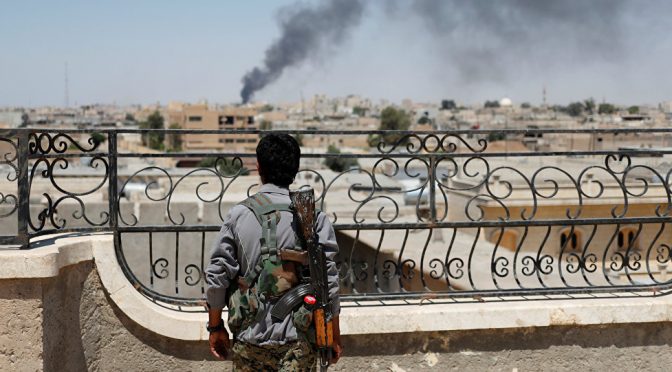 Although this is self-serving on the part of the Erdogan government, i.e. he was complaining about the US support on the Kurdish PYD and YPG, which he considers terrorist organizations just like the PKK inside Turkey, the Turkish government-controlled media disclosed a week ago that the United States has a total of 10 military outposts in Syria, and where their exact locations are.

“I think that by doing so Ankara wants to express anger over the cooperation between the US military and Kurdish forces,” Demir said.

The Turkish government considers the PYD and YPG to be affiliated with the Kurdistan Workers’ Party (PKK), listed as a terrorist organization. The PYD and the YPG, as well as the Kurdish-led Syrian Democratic Forces (SDF) have been receiving support from the US in fighting Daesh terrorists in Syria.

“Ankara sees Kurds as an existential threat, a threat more serious than Daesh. Erdogan cannot just sit and watch Kurds establish an autonomous state while siding with the US and France. This is why Ankara wants to hinder Kurdish military operations backed by the US-led coalition,” the journalist said.

According to Jacques Hogard, a retired French military officer and president of the consulting company EPEE, the public disclosure of sensitive military information could be a “very dangerous blow under the belt” to the US and French militaries.
“Islamist radicals, including Daesh, gather information and our enemies are very likely to use the information from that report to stage new attacks. The Turkish government is playing a double game. Ankara should explain the situation to NATO,” Hogard told Sputnik France.
He also pointed out that Ankara’s actions are aimed against Kurds backed by the US and other Western allies.
“I think this is why the disclosure of such sensitive information took place,” Hogard concluded.

Erdogan is slowly realizing that he, too, is not indispensable after the CIA coup against him took place and failed with the timely intelligence tip off  from the Russians.
Nevertheless, the Western Oligarchy has already achieved its primary goal, which is to sow turmoil in the region.