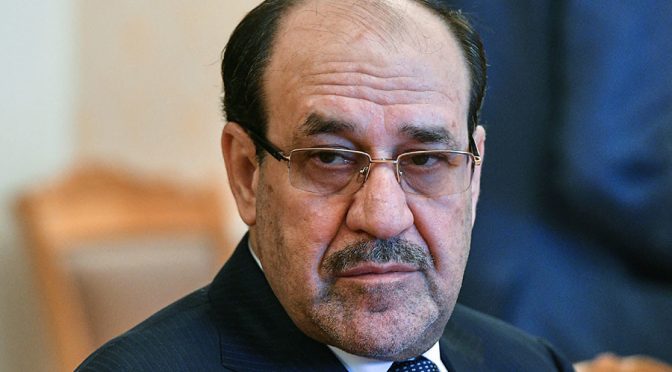 It’s not Russia that is forcing itself into the Middle East, but the countries that have grown weary and are tired of serving vested, genocidal interests, at the cost of their losing sovereignty, resources and security. The Iraqi government is sending its Vice President Nouri al-Maliki to purposely make such a request.

Published time: 24 Jul, 2017 21:00
Russian military and political presence in Iraq would bring balance to the whole Middle Eastern and North African region, Nouri al-Maliki, the Iraqi vice-president, said during his visit to Moscow.
“It’s well known that Russia has historically strong relations with Iraq, therefore we would like Russia to have a substantial presence in our country, both politically and militarily,” al-Maliki said during his meeting with the speaker of Russia’s upper house of parliament, Valentina Matviyenko.
“This way, a balance would be established that would benefit the region, its peoples and its countries,” he added.
The vice president said that Baghdad wants to boost relations with Moscow as it believes “in Russia’s role in solving most of the key international issues as well as improving stability and balance in our region and worldwide.”
Matviyenko, in turn, praised the commitment of the current Iraqi authorities to widening their cooperation with Moscow.
“Russia is also determined to expand its interaction with Iraq both politically and economically as well as in the military-technical sphere, and, of course, on the parliamentary level,” she said.
In his talks with Russia’s Foreign Minister, Sergey Lavrov, earlier Monday, al-Maliki stressed that a Russian presence in Iraq would bring the balance which couldn’t be “undermined in a political sense in favor of any external party.”
“Today we need Russia’s greater involvement in Iraqi affairs, especially in the energy field. Now when we are done with Islamic State (IS, formerly ISIS/ISIL), Iraq needs investments in energy and trade,” he said.
Earlier in July, the Iraqi authorities announced that the last IS stronghold in the country, Mosul, had been fully liberated from the terrorists, following an eight-months-long campaign backed by the US-led coalition.
Al-Maliki told Lavrov that Moscow and Baghdad “should enhance… cooperation in countering terrorism in the region.”
“We believe that both our countries are targets for terrorists and those who stand behind them,” al-Maliki said.

The global terror enterprise is, of course, run by the Deep State CIA / Khazarian Mafia that is losing power and influence by the minute.
One by one, they are disappearing “naturally” from this reality.

One thought on “Baghdad Wants More of Russia in Iraq”