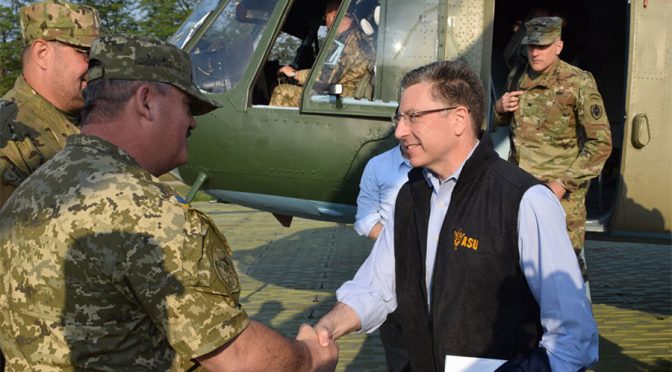 When somebody else is doing it, it’s an aggression. But when it is the US that is moving arms around, it’s perfectly fine. Grown ups tend to insult and degrade themselves, just to get what they don’t have the right to.
Washington is considering sending “defensive” weapons to Ukraine, US special representative Kurt Volker says. He insists the potential move, long desired by Kiev, would not be “provocative.” It comes as Moscow warns against fueling Ukraine’s civil war.
In an interview with the BBC on Tuesday, Volker, who was appointed by Secretary of State Rex Tillerson as the US special representative for Ukraine negotiations in July, said that US authorities are pondering whether to ship armaments to Kiev.
Noting that the discussion is currently focused on “defensive weapons, ones that would allow Ukraine to defend itself and to take out tanks, for example,” Volker argued that such supplies “would actually to help [sic]” Kiev fend off alleged encroachments from Moscow.
Volker fell short of providing any indication of when such a deal could be reached between Washington and Kiev, saying that he is “not again predicting where we go on this.”
However, he claimed that despite the unresolved conflict in eastern Ukraine, Washington does not view such a move as “provocative.”
“I think that argument that it would be provocative to Russia or emboldening of Ukraine is just getting it backwards,” Volker told the BBC, adding that the US believes a “new strategic dialogue” with Moscow is needed to resolve the Ukrainian conflict, which has recently seen a spike in violence.
Volker, who is a former adviser to US Senator John McCain and a former US ambassador to NATO, previously described the conflict between Donbass rebels and Kiev as a “hot war” and an “immediate crisis,” as opposed to a frozen conflict. Volker visited Ukraine on Sunday, offering comments on camera and posing with Ukrainian servicemen before driving off in an armored vehicle.

One thought on “US Mulls Sending Arms to Kiev, 'not provocative' | US Envoy to Ukraine”