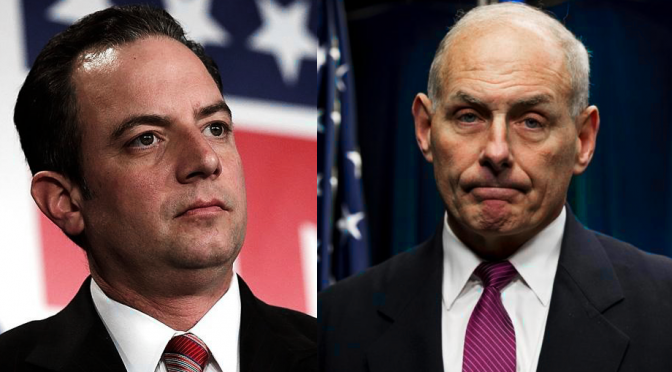 You’re fired! The Donald just said this to Apprentice Reince Priebus, who was suspected of leaking White House secrets to the Deep State media and Congress. The latter’s replacement is Homeland Security Chief John Kelly, who is expected to start draining the swamp in earnest.

I am pleased to inform you that I have just named General/Secretary John F Kelly as White House Chief of Staff. He is a Great American….

I would like to thank Reince Priebus for his service and dedication to his country. We accomplished a lot together and I am proud of him!

What this means is that, Trump is officially severing ties with the Republicans who rejected his Obama Repeal bill, rammed the anti-Russian sanctions on his desk, and keep him from fulfilling his campaign and inauguration commitments.
Add to this is both the Bannon and Kushner camps like Gen. Kelly.
Let’s see where this is all going then.

8 thoughts on “Priebus Out, Gen. Kelly In: Swamp Draining May Start Soon”